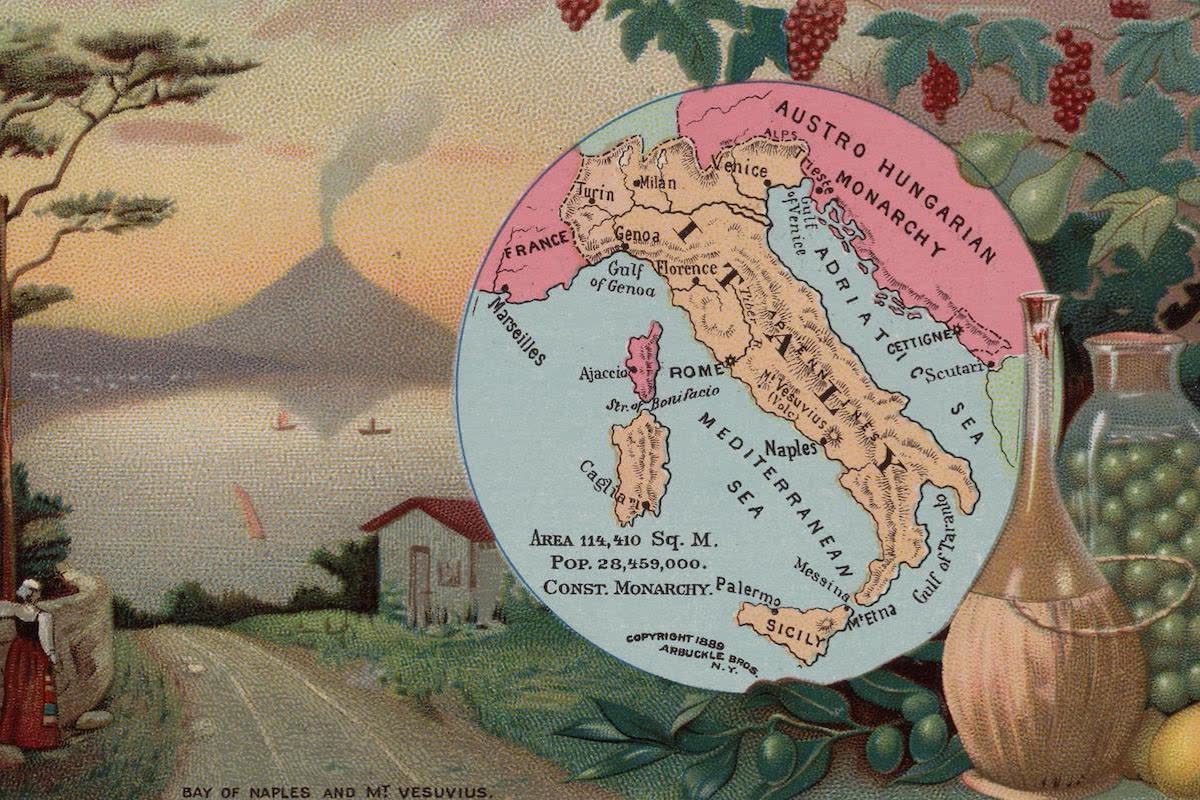 Italy, a country of southern Europe, which consists of a long stretch of peninsular mainland, closely resembling a boot in outline and including several islands. From the southern boundary of Sicily to the Alps its greatest length is about 700 miles, its breadth being 350 miles. Its natural limits are strongly defined by the Alps and the sea. The area of Italy is 110,550 square miles with a population of 34,565,198.

The early history of Italy is that of Rome. For 64 years after the invasion of the Goths they ruled in Italy, Teias, the last of the Gothic kings, being slain in battle about 553. The country then was divided, belonging now to the eastern and now to the western empire, with independent duchies and free cities. Eight kings of the Carlovingian line ruled in northern Italy until 887, followed by Italian sovereigns or dukes until, in 961, Otto was crowned king of Italy and emperor of Rome.

For two centuries the right to the crown of the Roman empire belonged to the German kingship. There was no Italian kingdom except in name, and with her foreign emperors living beyond the Alps, the country was left without a head. The struggles for supremacy between counts, between popes and emperors and between cities, in the quarrels of the Guelphs and Ghibellines, continued for centuries. In 1177, at Venice, after the defeat of Legnano, Frederick Barbarossa the emperor agreed to a six years’ truce, and in 1183 he made a treaty of peace with the Lombard towns.

With the capture of Constantinople (1204) Venice gained large territories as reward for her services and became supreme in the Levant. In 1278 the popes were recognized as temporal sovereigns, and their power over Rome established. In 1309 the seat of the papacy was removed to Avignon, where it remained for 70 years. In the 14th and 15th centuries Italy was divided among five powers — the kingdom of Naples, the duchy of Milan, the republics of Florence and Venice and the papacy; the Medici family flourished; the papacy was restored to Rome; and Florence as a republic acknowledged the influence of Savonarola. The 16th century was the most disastrous in Italian history.

The rivalry of Charles V and Francis I filled the land with foreign armies, the papacy being the gainer from the struggles. Francis I was driven out of Italy; Rome was sacked in 1527, the sack lasting seven months; the Medici were driven out, and restored and made grand-dukes of Tuscany. In 1529 the peace of Cambrai left Charles V master of Italy, and the peace of Château Cambray (1559) made his son Philip its undisputed lord. The papacy was strengthened by the founding of the order of Jesuits, the inquisition and additions to its territory; and Venice made her last great achievement in a war that had lasted five centuries by the conquest of the Peloponnesus in 1684. After each of three European wars of the 18th century Italy was divided afresh. Napoleon entered Italy in 1796, reconquered it at Marengo in 1800, and was crowned king of Italy in 1805.

The congress of Vienna in 1815 restored Italy to its former state. The year of revolution, 1848, opened with the party of Mazzini supreme. Pope Pius IX became a fugitive, and Garibaldi was in the field. Rome and Venice yielded to French armies, the pope and other petty sovereigns of Italy returned, and the revolution proved a failure. But Victor Emmanuel, Cavour and Garibaldi were ready for the coming struggle. Cavour made terms with Louis Napoleon, and the French and Italian troops won the battles of Magenta and Solferino, driving Austria to the east. In February, 1861, the first Italian parliament met at Turin, and Victor Emmanuel was proclaimed king of Italy. Venice was restored in 1866, and on Sept. 20, 1870, the king entered Rome and the emancipation of Italy was complete. The pope retained the Vatican, the church of Santa Maria Maggiore, the Lateran palace and the villa of Castel Gandolfo, and was given an income of $750,000 out of the revenues of the state. Italy, free and united, has become one of the great European powers.

In 1878 Victor Emmanuel died, and his son Humbert I succeeded him and in the same year occurred the death of Pius IX who was followed by Leo XIII. In July, 1900, Humbert was unhappily assassinated and was succeeded by the Prince of Naples, his son, who rules as Victor Emmanuel III. In 1911 Italy declared war upon Turkey and seized Tripoli, the war continuing through 1912. San Marino, an independent republic, is embraced in the area of Italy, besides the African dependencies on the Red Sea. Italy has 10,070 miles of railway and nearly 30,000 of telegraph lines. In 1905 it had close upon 6,000 postoffice savings banks, with 5,527,332 depositors, and over a thousand million lire of deposits. (The lira, plural lire, is worth 19 or 20 cents).

Surface. Northern Italy is for the most part one great plain, the basin of the Po. In central Italy the great Apennine chain gives a picturesque grandeur to the country. In the highland districts of Naples the Apennines reach an elevation of nearly 10,000 feet. The beautiful scenery of the coast plains is noted, and the brilliant flowers and vegetation give a novel beauty to the landscape. The chief mountain systems are the frontier ridge of the Alps — the highest peak in Italy is 13,652 feet high — and the Apennines. Italy has a number of volcanoes, of which the most remarkable summits are Vesuvius, which is still active, near Naples; Etna in Sicily; and Stromboli in the Lipari Isles. The great plains are those of Lombardy, Piedmont, the Venetian plains and Campo Felice.

Drainage and Climate. The Italian rivers, though numerous, are navigable only for the smallest vessels. The largest is the Po, 420 miles long, which rises on the borders of France and flows into the Adriatic. It has numerous tributaries. Among other rivers are the Adige, Arno, Tiber and Volturno. The mountain lakes are famous for their picturesque beauty. They are mostly in the northern provinces of Lombardy and Venetia. The largest are Maggiore, Lugano, Como, Iseo and Garda. The climate in the north is temperate, healthful and frequently severe in winter; in the central part it is more genial and sunny: and the heat of the southern provinces is almost tropical in its intensity.

People. The character of the people is in the main sober, industrious and thrifty, but with little real mechanical skill or ingenuity. Multitudes emigrate each year in search of work and homes; but all retain their passionate love for the fatherland, and look forward to the time when they can return with a competency. They are quick to resent an injury, but have the warm natures and sympathetic feelings of southern people. There were 1,342,800 Italians in the United States in 1910.

Occupation. Agriculture employs nearly a third of the entire population, and manufactures only about half as many. The main products are corn, wine, oil, raw silk, rice, olives and tropical fruits, besides hemp, flax and cotton, which are largely grown. Silk manufacturing is of most importance, and the making of gold and silver wares is carried on extensively in the larger cities, as is also work in bronze; while the terracotta statues, busts etc. are of the greatest beauty. Italian cameos, mosaics and Venetian glass are known the world over. Wines, soaps and sugar are also manufactured to some extent.

Religion and Education. Roman Catholicism is the state religion, but religious freedom is granted to all churches. The pope by the law of 1871 has his own court in the Vatican. Italy is behind most of the European nations in the education of her people; but since the union of the states much progress has been made. There are 21 universities, the oldest being at Bologna and the largest at Naples. The state regulates public instruction, and maintains public schools of every grade, either entirely or in union with the provinces.

The government is a constitutional monarchy, with a parliament consisting of a senate and chamber of deputies. The number of deputies is 508, chosen by the people, all who can read and write and pay a small tax having a vote. The senate (358 in number exclusive of five members of the royal family) is chosen by the king, and its members serve for life. Military service is required of all citizens from 20 to 39, and the whole number available for war is about 2,750,000 men. Italy has one of the strongest navies in Europe, and two of the armorclads were the largest warships ever built. The capital is Rome (population 575,000); the other chief cities are Naples (population 596,000), Milan (population 584,000), Turin (371,000) and Palermo (319,000).

See Renaissance in Italy by Symonds; Garibaldi and Italian Unity by Chambers; Life of Cavour by Mazade; Italy by W. Hunt in Freeman’s Historical Course; Life of Victor Emmanuel by Godkin; Hodgkin’s Italy and her Invaders; Hare’s Cities of Italy; Murray’s Handbook for Italy, for Rome and for Venice; Deecke’s Italy; and Marion Crawford’s Southern Italy, Sicily and Ave Roma Immortalis.