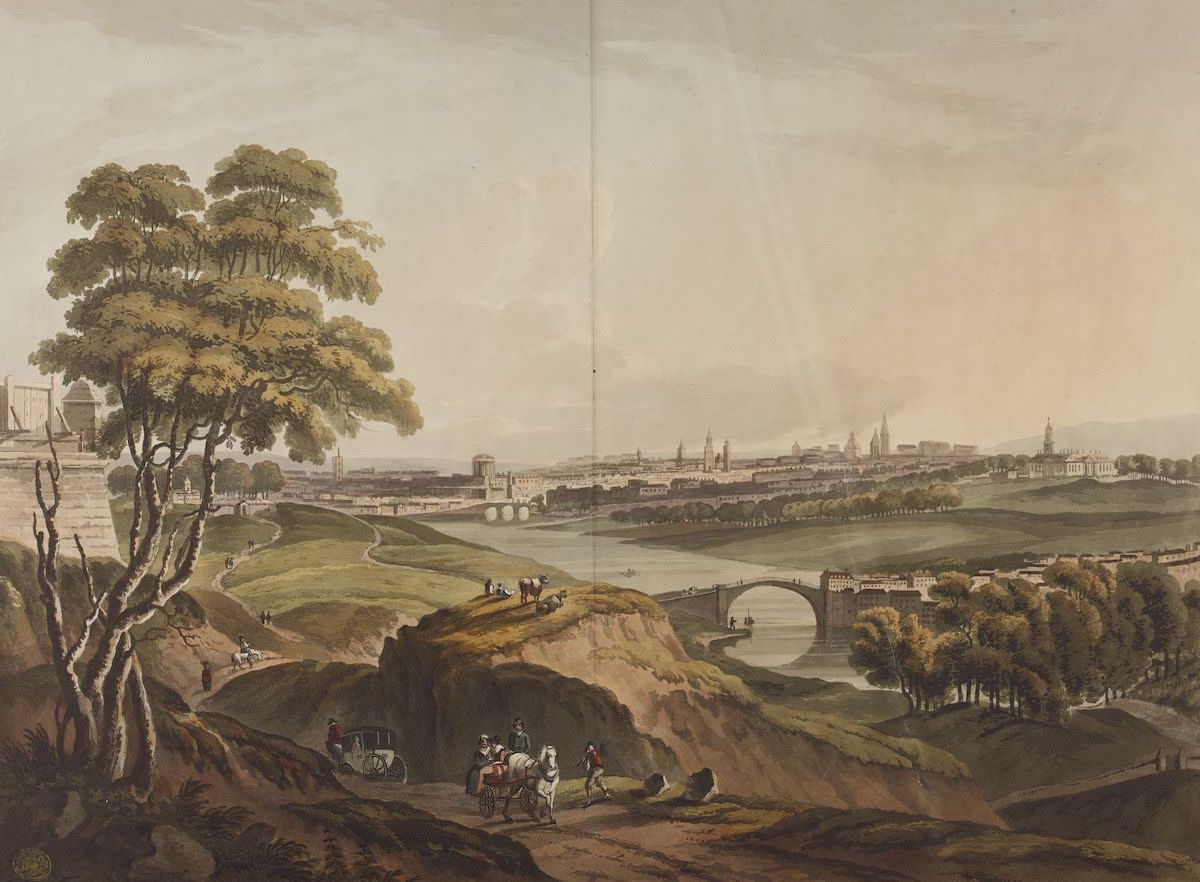 Ireland, an island forming part of the united Kingdom of Great Britain and Ireland. It is washed on the north, west and south by the Atlantic; and on the east by a strait called at different places the North Channel, the Irish Sea and St. George's Channel. Its length is 302, its breadth no, miles. The island was known to the Greeks as I erne and to the Romans as Hibernia. It is divided into the four provinces of Ulster, Leinster, Munster and Connaught, which are separated into thirty-two counties. The total area is 32,605 square miles.

The last census gave a population of 4,381,951, a decrease of over nine per cent, since 1881. The coasts are varied, from even and uniform on the east to rocky and uneven on the north, west and south. There are, however, numerous safe bays and excellent harbors. Dangerous headlands are pointed out to mariners by some sixty lighthouses and three floating lights. Down to the middle of the 18th century Ireland was a pastoral country, The soil, however, is in many parts adapted to agriculture. Fishing is carried on to some extent; but, the fisheries are not in a flourishing condition.

Ireland never has been a manufacturing country, though Irish linens are well-known. The exports are largely of grain, flour, butter, eggs, linen and salted meats. The climate is like that of Great Britain. The most important university is that of Dublin, with a teaching staff of 98 and 1,100 students. The history of Ireland abounds in legend and fable, showing a very ancient civilization and showing that the island was occupied by successive invaders, the Phoenicians and Greeks both taking part in its early settlement. The authentic history begins with the life and career of St. Patrick. Saint Patrick was born in Scotland, and in youth was carried as a slave to Ireland. He escaped to Rome, and rose high in the service of the church.

Early in the 5th century he returned to Ireland, with the object of converting it to Christianity. He more than accomplished his holy mission, making Ireland the great missionary school from which he sent forth preachers of the faith into all Europe. The Norman invasion took place in 1167, during the reign of Henry II of England. After the conquest the king divided the island into counties, and set up the English courts in Dublin. He made huge grants of land to favorite Norman barons, to hold as they could. So began the great struggle in Ireland, which has lasted down to our own day. The struggle between Normans and Irish filled the period until, in Henry VII's reign, was passed the famous measure known as Poyning's act (1494), which declared that all English laws should have force in Ireland and that the acts of the Irish parliament should be confined to 'such measures as had been first approved by the king and the privy council in England.

Henry VIII confiscated the church lands in Ireland, as in England, and attempted to force the people to give up the Roman Catholic religion. The Earl of Tyrone, one of the great family of O'Neill, kept up the struggle in the reign of Elizabeth, defeating Essex but yielding to Mount joy. The Irish rose in rebellion during the Civil War in England, but were conquered by Cromwell, their country, all but Connaught, being given to the English and Scotch settlers and the Irish being driven into Connaught. Under Charles II and James II the struggle continued; while the loyalty of the Irish to James brought upon them the vengeance of William III and the defeat of James II at the battle of the Boyne.

The treaty made at the surrender at Limerick was broken, and the penal laws, as they were called, were imposed, with the object of driving Roman Catholicism from the land. The war with America gave the Irish another opportunity to claim their rights, and with Grattan and Flood as leaders they succeeded in 1782 in securing the declaration of the independence of the Irish parliament. The new leaders were Protestants, but made a strong effort to repeal the laws against the Catholics, but failed; and the failure brought on another rebellion and cruel punishment. By unscrupulous means the Irish parliament was induced to agree to the act of union by which Ireland, like Scotland, came into one parliament with England.. Since that time the names of Emmett, O'Connell and Parnell as Irish leaders and of Bright and Gladstone as English defenders of the Irish cause indicate the struggle that is still in progress.

There seems to be evidence that Ireland has of recent years made a decided advance in the direction of a better social and financial condition, to the satisfaction of its many and sincere well-wishers. This is borne out by the returns of the banking, railway, agricultural and co-operative credit associations in Ireland, which show great social improvement in the condition of the people and gratifying evidences of financial thrift in certain classes in the community. The emigration statistics, issued by the Irish registrar-general for 1900, are also significant.

See English in Ireland in the Eighteenth Century by Froude and Outlines of Irish History by McCarthy.