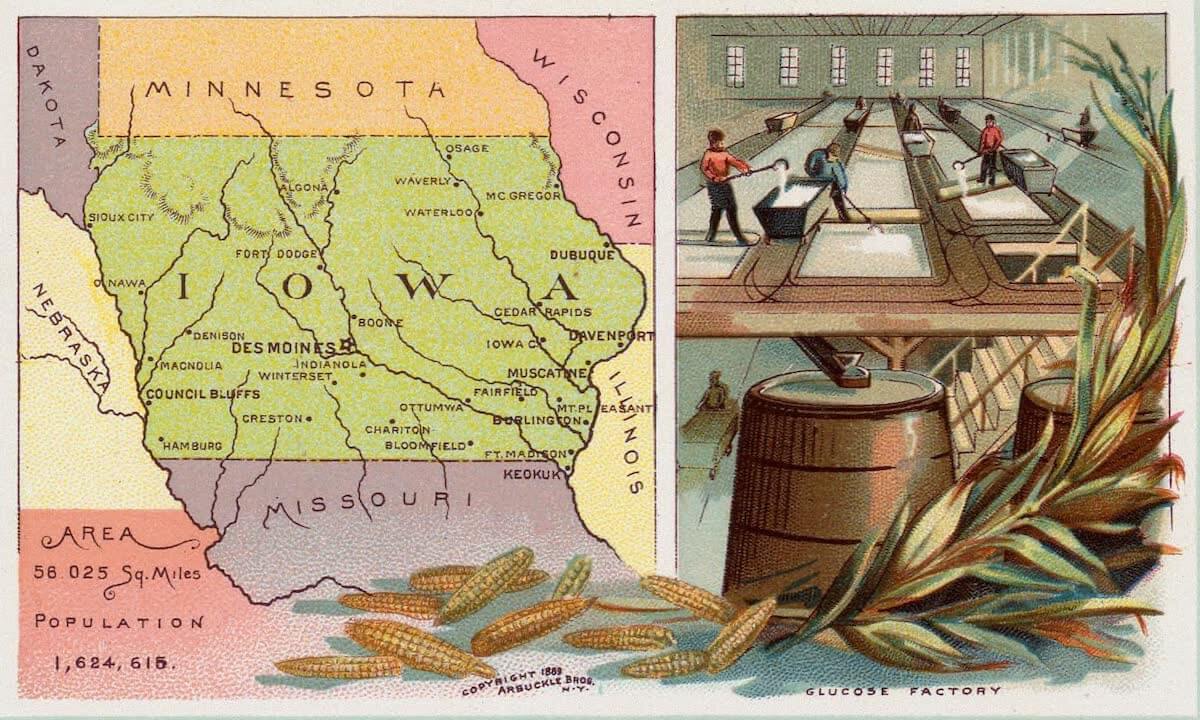 Iowa (????w?), the “Hawkeye State,” one of the north-central states, is bounded on the north by Minnesota, on the east by Wisconsin and Illinois, on the south by Missouri and on the west by Nebraska and South Dakota. It is rectangular in shape; 310 miles east and west and 205 north and south; has an area of 56,025 square miles; the Mississippi flows along the eastern border and the Missouri and Big Horn along the western one. Des Moines, the largest city and capital, has a population of 86,368. The state's population is 2,224,771.

In 1673 Marquette and Joliet and in 1680 Hennepin touched the borders of the state. In 1788 Julian Dubuque obtained from the Indians a tract of land, including the present site of Dubuque. He established a trading post and developed the lead mines. Upon his death in 1810 the settlement was abandoned. In 1803 this territory, as part of the Louisiana Purchase, became part of the United States. Until 1838 it formed part of the territories of Louisiana, Missouri, Michigan and Wisconsin in succession.

On June 12, 1838, it was organized as a separate territory, and on December 28, 1846, it was admitted into the Union. Fort Madison was erected in 1808, and in 1832 immigrants settled in that vicinity and at Burlington. After the close of the Black Hawk War this territory was settled rapidly. With the revision in 1857 of the constitution of 1846, the seat of government, which had been moved from Burlington to Iowa City in 1844, was transferred to Des Moines. When the whites first entered this territory, the Sac and Fox Indians occupied the eastern and the Sioux the western portions. The remnants of the former are now maintained on their reservation near Toledo, Tama County, while the latter have entirely disappeared.

Surface. Iowa, lying in the great central plateau, is distinctively a prairie state. The surface is gently rolling, except on the eastern and western borders where erosion has formed hills and bluffs. In the southern part, also, the same cause has produced hills grouped in series forming ridges having a general north and south direction parallel to the streams. From the highest point, Wanita, O'Brien County (1,562 feet), the plateau slopes gently to the south and southeast, the lowest point being in the southeastern part of the state (400 feet).

Drainage. The watershed extends across the state parallel to the Missouri River, forming two hydrographic systems—the Mississippi draining the eastern two thirds and the western draining the western third. Of the former, the most important rivers are the Des Moines, which is the longest and most important, Cedar, Iowa, Skunk, Wapsipinican and Turkey; of the Missouri system the Big Sioux, Little Sioux, Nishnabotna and Nodaway may be named. Those of the Mississippi system flow southeast, those of the Missouri system to the southwest. In the northern part are numerous, clear, pebbly lakes in glacier-scored beds. The most important of these are Spirit Lake, the two Okoboji Lakes and Clear Lake, all popular summer resorts.

Soil. Over the entire area of the state, except in the extreme northeastern portion, is a deposit of glacial drift consisting of fine rock arid fragments varying from a few inches to hundreds of feet in depth. This covering gives the state an unusual variety of fertile soils. There are three distinct kinds: alluvial, consisting of recent deposits, the principal tract being the Missouri bottoms, very fertile; glacial drift, a fine clay and sand loam, also very fertile, covering the greater part of the state; and loess, a fine yellowish sand found in various parts of the state along the margin of drift areas.

Forests. There are no great forests, the timber growing along the banks of the streams. The principal native trees are the elm, the oaks, cottonwood, walnut, hickory, maple, cedar etc.

Minerals and Mining. Of the mineral products, bituminous coal is the most valuable. In 1910 more than 7,928,120 tons were mined. The coal measures lie in the southern part of the state with extensions up the Des Moines and Missouri Rivers. Gypsum building stone, limestone and lead are mined in several localities. Excellent clays for the manufacture of brick and pottery abound, and give rise to important industries. The total value of the clay products in 1904 was $3,487,176.

Climate. Owing to the uniformity of surface and altitude, there is uniformity of climate. The climate is continental, with great variations in temperature between summer and winter, the extremes ranging from 40° below zero to 110° above with an average of 47.4° F. The rainfall averages 30.11 inches, two thirds of which fall during the crop months from April to October. This fact, together with the high temperature during the summer and the fertile soil, accounts for Iowa's agricultural prosperity.

Agriculture. Iowa is unsurpassed in the quality and extent of its cultivated land. In 1910 it exceeded every other state in the percent (95.3) of its land area in farms and in the percent (82.8) that was improved. Iowa ranks first of the states in the production of corn, more than one fourth of the total area being devoted to it, and its value equals that of all of the other crops. The crop of 1910 was 343,870,000 bushels. Oats, with half the acreage and one third the value, rank next. Wheat, at one time one of the most important crops of the state, was largely abandoned, but is again becoming an important crop. Other important cereals are barley, rye and buckwheat.

Large quantities of hay and forage crops are raised to meet the demands of the extensive live stock interests of the state. In the production of Irish potatoes the state ranks second, while vegetables are raised in large quantities. The production of fruit, especially of apples, is assuming an important place. Dairying and sheep-raising are also important industries, the value of dairy products alone being over $30,000,000 annually. On April 15, 1910, there were 4,448,006 head of cattle, 1,547,810 horses and mules and 7,545,853 swine in the state.

Manufactures. Iowa, with an abundant supply of fuel and good transportation facilities, sends the larger part of her farm products to other states to be manufactured. However, she has made substantial progress in many lines of manufacture, as dairy products, slaughtering and packing, milling, vehicles, food preparations, foundry and machine shops, clay products, lumber, etc. The 1910 census showed 5,528 establishments, having a capital of $171,219,000, employing 73,037 persons at an expense of $43,514,000, the value of whose products was $259,238,000.

There are no works available for the Iowa collection.