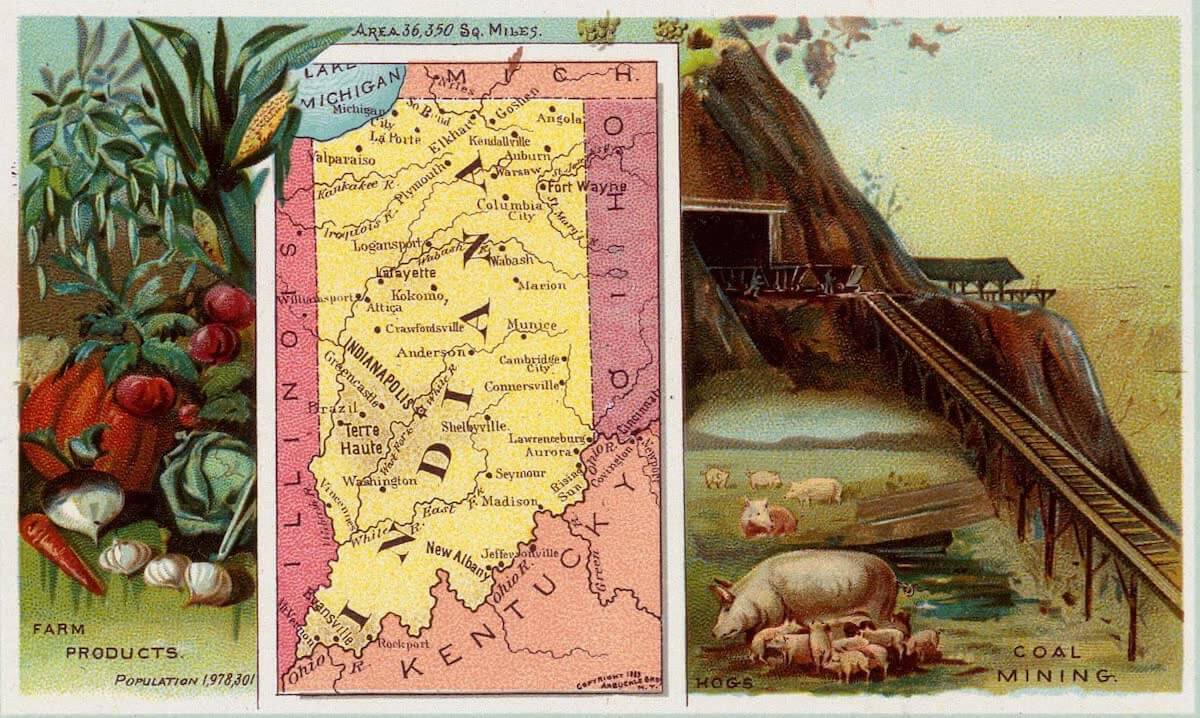 Indiana, one of the central states of the Union, is the smallest of the western states, being 275 miles long, with a breadth of 140, covering an area of 36,350 square miles. Its population is 2,700,876. The state is bounded by Michigan and Lake Michigan on the north; by Ohio on the east; by Illinois on the west; and by Kentucky, separated by the Ohio River, on the south. The state is divided into 92 counties, with the capital, Indianapolis (pop. 233,650), near its center. The other chief cities are Evansville, Fort Wayne, South Bend and Terre Haute.

Surface and Drainage. The surface is level, generally speaking, with sluggish streams. The northern part originally was swampy, but since its drainage the soil is wonderfully fertile and the climate healthful. The central portion is somewhat rolling, and the southern part slightly hilly. Its southern portion is drained by the Ohio and its tributaries. The Wabash River, which forms its western boundary for 100 miles, crosses the state. It is 600 miles long and navigable for 300 miles. These are the main streams, but in the northwest is the Kankakee, draining into the Illinois, and in the northeast are the St. Joseph and St. Mary’s Rivers, which unite at Fort Wayne and become the Maumee.

Natural Resources. Coal, iron ore, sandstone, gypsum and natural gas are among its mineral riches. The coal product in 1910 was 18,389,879 tons; that of petroleum was about 1,568,475 barrels. There was a decrease in the volume of natural gas and petroleum. Indiana was originally covered with heavy forests, and its lumber-product still reaches $16,000,000 yearly.

Agriculture. Farming is an important industry. The Wabash valley is one of the most fertile regions in the world, and the yield of wheat and corn is enormous. The staple productions are, wheat, corn, barley, rye, potatoes and tobacco. Many horses, sheep, cattle and hogs are raised.

Manufactures. Indiana has become an important manufacturing state. In the northwest portion are such manufacturing cities as Hammond and Gary, which are contiguous to Chicago, and Michigan City is in the northwest. The principal manufactures are steel, iron, carriages, wagons, plate-glass, plows, railroad cars, office-desks and machinery. Other important industries are flour and gristmilling, slaughtering and packing, clayworking and brewing.

Education. Indiana ranks high in the educational world, having always given much attention to schoolwork and making wise provision for support of schools. Each county has its superintendent, and these are under the supervision of a state superintendent. Indiana in 1912 had a school population of 761,494, the number of schoolhouses in the state being 9,197 and of teachers 17,305. The state university at Bloomington, De Pauw University at Greencastle, Purdue University at Lafayette, the University of Notre Dame, the largest Catholic institution in the west, Hanover and Wabash Colleges, at Hanover and Crawfordsville, and Rose Polytechnic Institute at Terre Haute are a few among the many institutions of higher learning. The State University, Purdue with its Agricultural School, and the State Normal School at Terre Haute, receive State aid.

Transportation. There are 7,420 miles of railway; much traffic is conducted over Lake Michigan and the Ohio and Wabash Rivers; and the electric lines measure 1,597 miles.

The state was first settled by the French under Beaubods, in 1731, at Vincennes on the Wabash. It was ceded to Great Britain, and in 1783, after the Revolutionary War, it became the possession of the United States. In 1787 it became part of the Northwest Territory, and in 1800 was made a separate territory, entering the Union in 1816. Early in the 19th century the settlements were disturbed by hostile Indians under the famous chief, Tecumseh. General Harrison marched to Tippecanoe on the Wabash, Nov. 6, 1811, and on the following day there was a desperate battle, in which the Indians were defeated, afterward suing for peace. See Settlement of Wabash Valley by Cox and History of Indiana by Goodrich and Tuttle.

There are no works available for the Indiana collection.