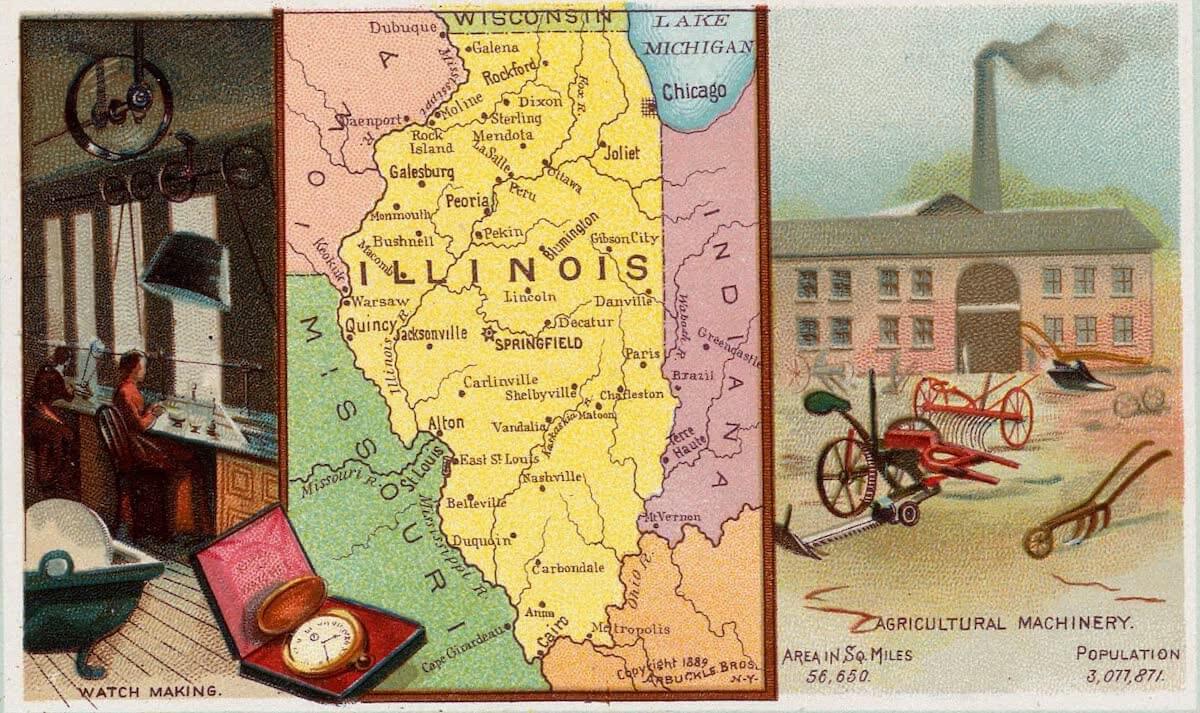 Illinois (il-i-noiz? or -noi?), one of the central states of the United States, contains 56,650 square miles. It is 378 miles long and 210 wide. The state is divided into 102 counties, with the capital at Springfield, near its center. The chief cities are Chicago, Peoria, Quincy, East St. Louis, Springfield, Rockford and Joliet. The state is bounded by Wisconsin on the north and by Lake Michigan and Indiana on the east, and is separated by the Ohio from Kentucky on the south and by the Mississippi from Iowa and Missouri on the west.

The first Europeans to see Illinois were Marquette and Joliet in 1673. Joliet, La Salle and Tonti visted the region again in 1679, and in 1680 La Salle and Hennepin established Christian missions there. The first American settlers were from Virginia, which claimed the whole of the northwest, but generously yielded its claim to the United States in 1784, when Illinois became United States territory. It was organized as a territory, including Wisconsin, Minnesota and Michigan, in 1809. In 1818 it was admitted into the Union. It suffered from the Black Hawk wars in 1832; and in 1840 by an uprising of the people, when the Mormons, who had founded the town of Nauvoo, were driven out.

Surface. The Prairie State, as Illinois is called, is in the main level. Unlike the great plains of the west, however, it is rolling, with sloping hills and broad, shallow valleys. The highest part of the state is in the northwest, where there are some high hills. The southern part of the state is crossed by another line of hills, from the Ohio to the Mississippi. This is a spur of the Ozark Mountains. The central part of the state is a broad valley, extending in a southwesterly direction almost across the state. A low ridge of land, stretching across the northeast corner, separates this central valley from Lake Michigan. This divide, which prevented the lake from flowing into the upper streams of the Illinois, has been cut through, and this cut forms the Chicago Drainage Canal, which see.

Drainage. Nearly three fourths of the boundary of Illinois is formed by navigable rivers. The main rivers of the interior have a southwesterly direction. They are the Rock, Illinois (500 miles long) and the Kaskaskia, which flow into the Mississippi.

Soil and Climate. The fertility of Illinois is such as to make it one of the finest farming states in the Union. It has few hills or mountains, being mainly rich prairies, while the river-bottoms, with a vegetable soil 40 feet in depth, have produced crops for many successive years without fertilizing. The extreme southern part of the state is warm, with mild winters, but the northern part has a severe climate. Sudden changes of temperature are frequent, and extremes of heat and cold are great.

Products and Natural Resourses. The chief cereal crops are corn, wheat and oats, but barley, rye and buckwheat are also grown. Potatoes, hay and tobacco, apples, pears, peaches, grapes etc. also are among its products. The state has a large stock industry, comprising cattle, horses, swine and mules. It is rich in minerals, having nearly one fifth of the coal-field area of the United States, which covers about three-fourths of the state, with 800 mines. Iron ore, zinc, lead and copper are found, also petroleum, natural gas, fluor-spar and limestone.

Education. The state has done and is doing great things for education, which is free and compulsory for children between seven and 14 years of age. General supervision of the public schools is entrusted to the superintendent of public instruction. Each county has a superintendent, who examines accounts, inspects schools, and grants teachers' certificates. Among the prominent educational institutions of Illinois are the Chicago University, with 334 instructors, St. Ignatius College (R. C.); Northwestern University, with 195 instructors; Lake Forest College, with 18 instructors; Knox College at Galesburg, with 32 instructors; Illinois Wesleyan University, at Bloomington, with 22 instructors; Armour Institute of Technology, at Chicago, with 68 instructors; and at Peoria, Bradley Polytechnic. Illinois has normal schools at Normal, De Kalb, Charleston, Carbondale, Macomb and Chicago; and located at Urbana is the state university, with 609 instructors. The state university has an agricultural department and an experimental station connected with it, and in 1862 received from congress a land-grant of 480,000 acres. Other institutions are Illinois College, Shurtleff College, McCormick, Union Baptist and Chicago Theological Seminaries.

Manufactures. Having natural advantages in its water communication by lake and rivers, abundance of coal and, in addition, many thousand miles of railway, Illinois has become a great manufacturing state. Her chief industries are slaughtering and meat packing, the manufacture of iron and steel, foundry and machine-shop products, furniture, agricultural implements, clothing, liquors, printing and publishing, electrical machinery and railway cars.

Railroads and Population. Illinois ranks as second state in the mileage of railroads. The population has increased rapidly from 12,282 in 1810 to 5,638,591 in 1910, placing it third among the states. More than half the people were born in other states or foreign countries.

The arsenal at Rock Island was established by congress in 1863, and is the best equipped arsenal in the United States, with powder works and foundries. When in full operation it can arm, equip and supply 750,000 troops. Fort Sheridan, on Lake Michigan, 25 miles north of Chicago, was built by the government in 1888, and beyond, at North Chicago, is the U. S. Naval Training Station. At Springfield is the grave of Abraham Lincoln.

See Early History of Illinois by Breese; Illinois, Historical and Statistical, by J. Moses; and Illinois in the Black Hawk and Mexican Wars by Elliott.