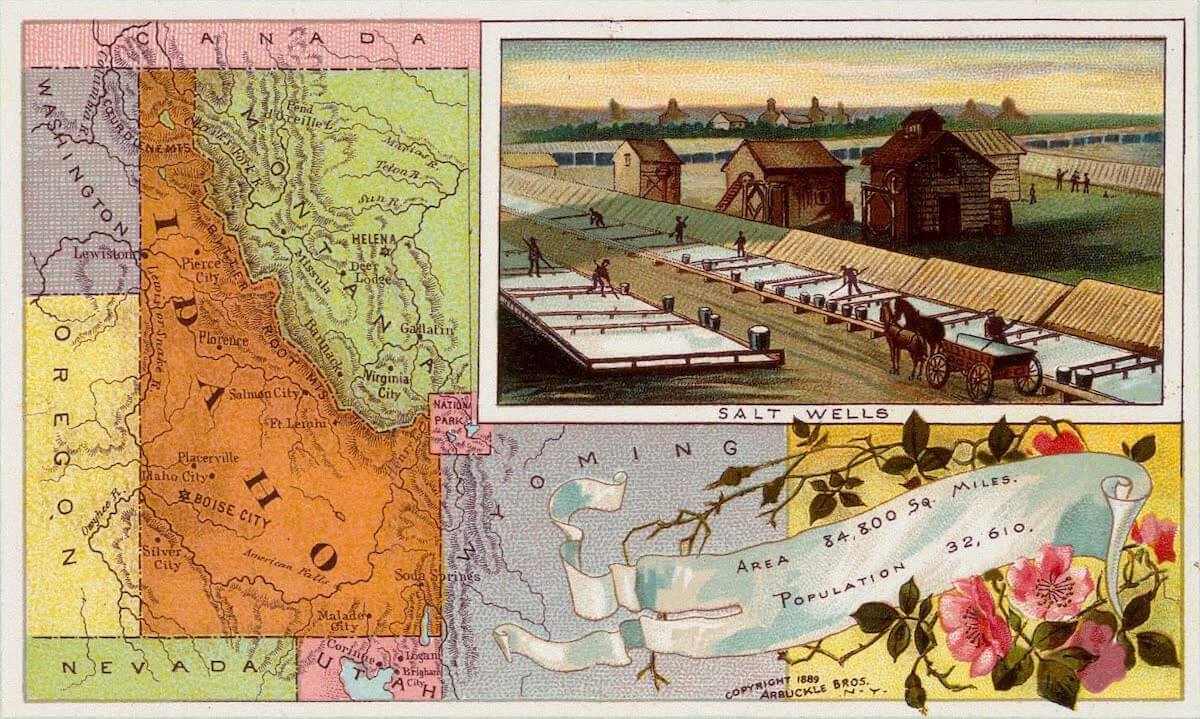 Idaho, the “Gem of the Mountains” or, from its peculiar shape, the “Panhandle State,” is in the extreme northwest of the United States. It is bounded on the north by Canada; on the east by Montana, the crest of the Rocky Mountains and Wyoming; on the south by Utah and Nevada; and on the west by Washington, Oregon and Snake River. Its greatest length, north and south, is 480 miles; east and west, 325 miles. Its total area is 84,600 square miles. The population numbers 325,594.

Idaho was used only as an emigrant trail to reach the coast until the discovery of gold in the north drew great numbers to Lewiston in 1860. In 1870 Idaho was created a territory. In 1890 it became a state. It is just entering upon a great development. Immigration is largely stimulated by the irrigation projects. Idaho's population is distributed through 23 counties. Boise, the capital, has 17,358 inhabitants. Other important towns are Wallace, Lewiston, Coeur d'Alene and Pocatello. There are 11 railroads, the chief being the Great Northern, the Northern Pacific, the Oregon Short Line and the Oregon, Railroad and Navigation Company. The Chicago, Milwaukee and St. Paul will also soon traverse Idaho.

Surface. The diverse surface makes Idaho scenery more varied than that of any other state in the Union and the peer in sublimity and grandeur of Switzerland. It has lofty mountains, some heavily timbered, some snow-capped the year round; sheer canyons with granite walls; upland meadows with tall grass, extensive plateaus; fertile valleys low foot-hills, suited, in the north of the state, both to summer and winter crops of wheat; lavabeds, the wonder of geologists; opal fields; placid lakes wooded to the very water's edge; large rivers; hot and mineral springs noted and developed for their medicinal properties and used to heat the houses in winter; and falls not surpassed in volume of water and depth by anything but Niagara. A large majority of the surface lies below an elevation of 5,000 feet.

Climate. The varied topography determines the climate, which is extremely diverse in different districts. It is extremely healthful and is noted for the invigorating quality which makes the most efficient work possible throughout the year. The winters, except at great altitudes, are neither severe nor protracted, and the summers are everywhere free from the humidity which makes the middle west and eastern states so trying.

Natural Features. The state has two drainage-systems, the more important emptying into the Pacific and the other into Great Salt Lake. The principal river, the Snake, winds for 850 miles through Idaho, 200 of these miles being navigable. There are about 60 mountain peaks and ranges and 20 lakes.

Resources and Industries. Idaho's great resources are its soil, minerals, timber and water-supply. The soil is very productive. The available water-supply, which, by the law of the state must be for public use, is practically unlimited. The Snake River is harnessed at American Falls. The government reclamation service and private individuals are reclaiming vast tracts of arid land in the south of the state by means of irrigation. A dam was erected at Minidoka in 1912 and electrical machinery installed to develop 30,000 horse power. A fine power-plant was erected at Shoshone Falls in 1906. Other plants for lighting cities and for operating street-railways are at Salmon Falls, Horse Shoe Bend on Payette River, Twin Falls and Alberta. Electric rural roads are being constructed throughout the state.

The chief industries are lumbering, mining, stockraising and farming. Its timber is chiefly red fir, white and yellow pine, tamarack and cedar. The Potlatch Lumber Company's mill at Potlatch is second in size to only one other mill in the world and is the largest one in the United States.

Education. Idaho from the start looked after its educational interests with great foresight and generosity. Its public school system is under the direction of a state board of education and a superintendent of public instruction. The state maintains an academy at Pocatello, Bannock County; the State Normal School at Albion; the Normal School at Lewiston; the Industrial Training School at St. Anthony; the School for the Deaf, Dumb and Blind at Boise; and the State University at Moscow.

The university includes the college of agriculture, the school of arts and sciences, the colleges of civil, electrical and mining engineering and the government experiment station. Excellent administration and magnificent land grants have already placed the university among the leading educational institutions for higher learning in the entire west. The state also maintains the free traveling library system, and has about 110 newspapers and four magazines.

There are no works available for the Idaho collection.