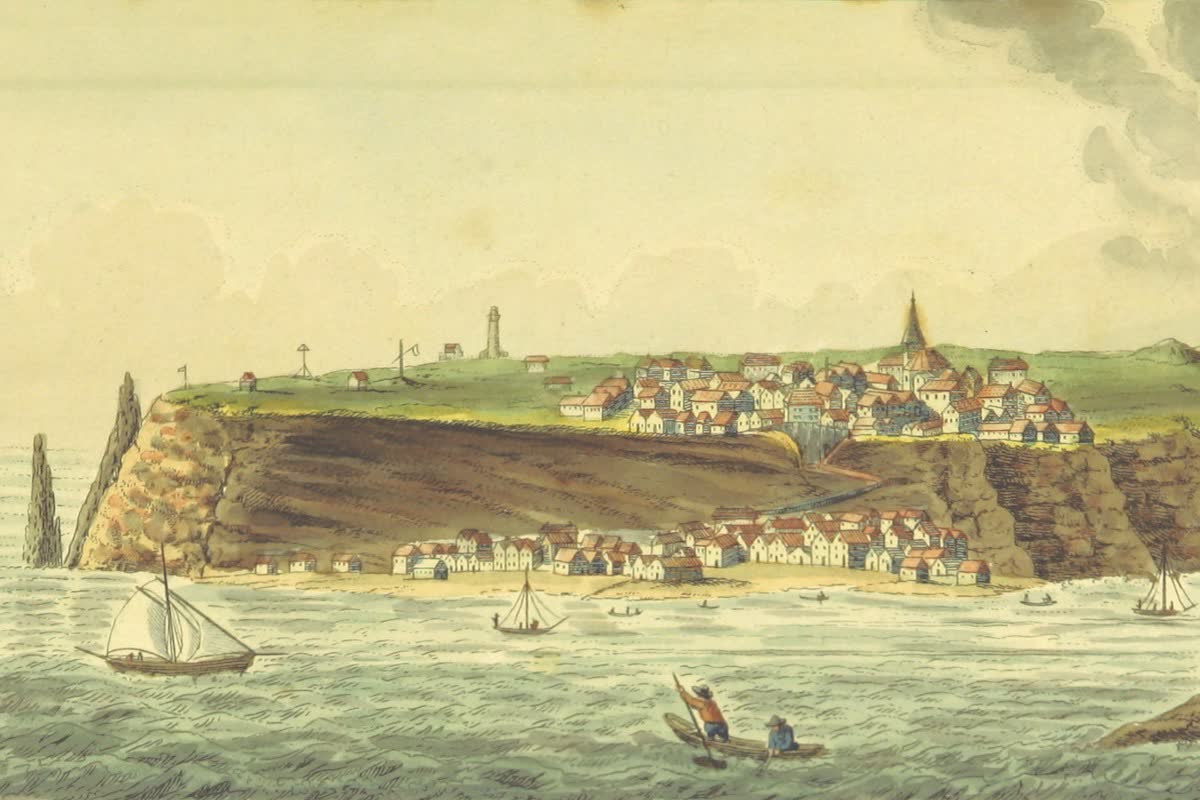 Heligoland (Ger. Helgoland), an island of Germany, in the North Sea, lying off the mouths of the Elbe and the Weser, 28m. from the nearest point in the mainland.

From 1807 to 1890 a British possession, it was ceded in 1890 to Germany, and since 1892 has formed part of the Prussian province of Schleswig-Holstein.

The latter is nearly triangular in shape and is surrounded by steep red cliffs, the only beach being the sandy spit near the south-east point, where the landing-stage is situated. The rocks composing the cliffs are worn into caves, and around the island are many fantastic arches and columns. The impression made by the red cliffs, fringed by a white beach and supporting the green Oberland, is commonly believed to have suggested the national colours, red, white and green, or, as the old Frisian rhyme goes: -

The lower town of Unterland, on the spit, and the upper town, or Oberland, situated on the cliff above, are connected by a wooden stair and a lift. There is a powerful lighthouse, and since its cession by Great Britain to Germany, the main island has been strongly fortified, the old English batteries being replaced by armored turrets mounting guns of heavy calibre. Inside the Dünen-Insel the largest ships can ride safely at anchor, and take in coal and other supplies. The greatest length of the main island, which slopes somewhat from west to east, is just a mile, and the greatest breadth less than a third of a mile, its average height 198 ft., and the highest point, crowned by the church, with a conspicuous spire, 216 ft.

The Dünen-Insel is a sand-bank protected by groines. It is only about 200 ft. above the sea at its highest point, but the drifting sands make the height rather variable. The sea-bathing establishment is situated here; a shelving beach of white sand presenting excellent facilities for bathing. Most of the houses are built of brick, but some are of wood. There are a theatre, a Kurhaus, and a number of hotels and restaurants. In 1892 a biological institute, with a marine museum and aquarium (1900) attached, was opened.

During the summer some 20,000 people visit the island for sea-bathing. German is the official language, though among themselves the natives speak a dialect of Frisian, barely intelligible to the other islands of the group. There is regular communication with Bremen and Hamburg. The winters are stormy. May and the early part of June are wet and foggy, so that few visitors arrive before the middle of he latter month.

The generally accepted derivation of Heligoland (or Helgoland) from Heiligeland, i.e. "Holy Land," seems doubtful. According to northern mythology, Forseti, a son of Balder and Nanna, the god of justice, had a temple on the island, which was subsequently destroyed by St Ludger. This legend may have given rise to the derivation "Holy Land." The more probable etymology, however, is that of Hallaglun, or Halligland, i.e. "land of banks, which cover and uncover." Here Hertha, according to tradition, had her great temple, and hither came from the mainland the Angles to worship at her shrine.

Here also lived King Radbod, a pagan, and on this isle St Willibrord in the 7th century first preached Christianity; and for its ownership, before and after that date, many sea-rovers have fought. Finally it became a fief of the dukes of Schleswig-Holstein, though often hypothecated for loans advanced to these princes by the free city of Hamburg. The island was a Danish possession in 1807, when the English seized and held it until it was formally ceded to them in 1814. In the picturesque old church there are still traces of a painted Dannebrog.

In 1890 the island was ceded to Germany, and in 1892 it was incorporated with Prussia, when it was provided that natives born before the year 1880 should be allowed to elect either for British or German nationality, and until 1901 no additional import duties were imposed. In 1900 the population was recorded at 2307 people.