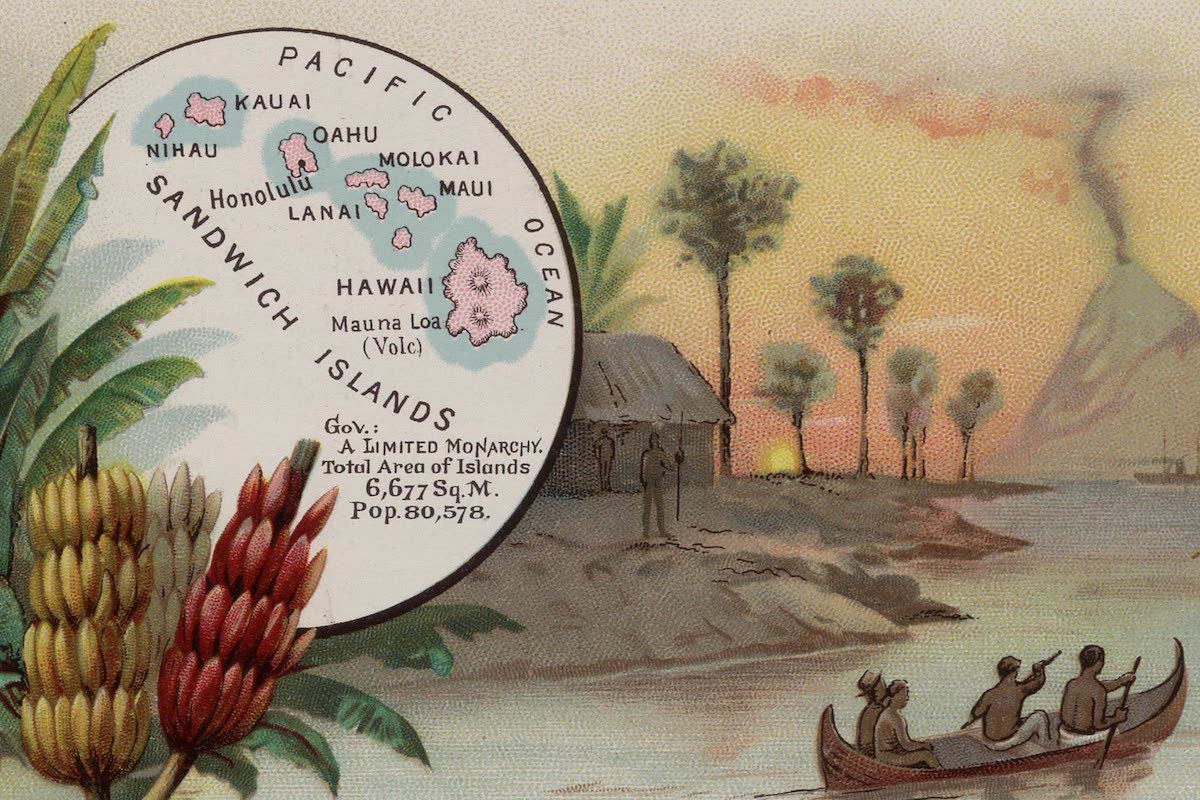 Hawaiian (hä-w??yan) or Sandwich Islands, a small archipelago in the northern Pacific, until lately forming the kingdom of Hawaii and named Sandwich Islands by Captain Cook. They are eight in number, and form a beautiful group, running from southeast to northwest — a territory now of the United States. The capital is Honolulu (pop. over 50,000) on the southwest coast of the island of Oahu. History.

The islands are said to have been found by Gaetano in 1542, and were rediscovered by Captain Cook in 1778. Formerly each island was governed by a separate king, but early in the 19th century, under Kamehameha I, they were united into one kingdom, whose ruler was vested with almost absolute power. This so remained until about 1886, when the powers of the king were greatly curtailed. Another Kamehameha, who died in 1874, was succeeded by Kalakaua. The latter died in 1891, and was succeeded by Queen Liliuokalani, who was deposed in January, 1893. The republic of Hawaii was proclaimed on July 4, 1894, and annexation to the United States was sought. After four years a treaty of annexation was passed by congress, and on July 7, 1898, the islands became a part of the United States.

The strategic value of the Hawaiian Islands to the United States is supreme. Lying within easy steaming distance of our Pacific coast, they afford a point from which the whole North Pacific Ocean can be patrolled by cruisers and the commerce of the Panama Canal be protected. In 1893 our greatest authority on seapower and naval strategy, Capt. A. T. Mahan, wrote in reference to the proposed annexation of Hawaii:

“To any one viewing a map that shows the full extent of the Pacific two circumstances will be strikingly and immediately apparent. He will see at a glance that the Sandwich Islands stand by themselves in a state of comparative isolation amid a vast expense of sea; and, again, that they form the center of a large circle whose radius is approximately the distance from Honolulu to San Francisco. To have a central position such as this and to be alone, having no rival, are conditions that at once fix the attention of the strategist. But to this striking combination is to be added the remarkable relations borne to the great commercial routes traversing this vast expanse. It is rarely that so important a factor in the attack or defense of a coastline — of a sea-frontier — is concentrated in a single position, and the circumstance renders it doubly imperative upon us to secure it if we righteously can.”

Government. The islands were organized as a territory of the United States; the new territorial government was inaugurated at Honolulu, June 14, 1900; and the first territorial legislature began its sessions at Honolulu on February 20, 1901. For military purposes the islands are attached to the department of California.

Climate and Products. The climate is fairly temperate, the mercury seldom rising above 90° F. and, in the cooler season, rarely falling below 52°. The valleys are beautiful and highly fertile, and are covered with sugar, cotton and rice plantations. The commerce of the islands is gradually increasing. In 1876 a reciprocity treaty was concluded with the United States, which led to an enormous development of the sugar-export trade. The other chief articles of export are rice, wool, molasses, tallow and bananas.