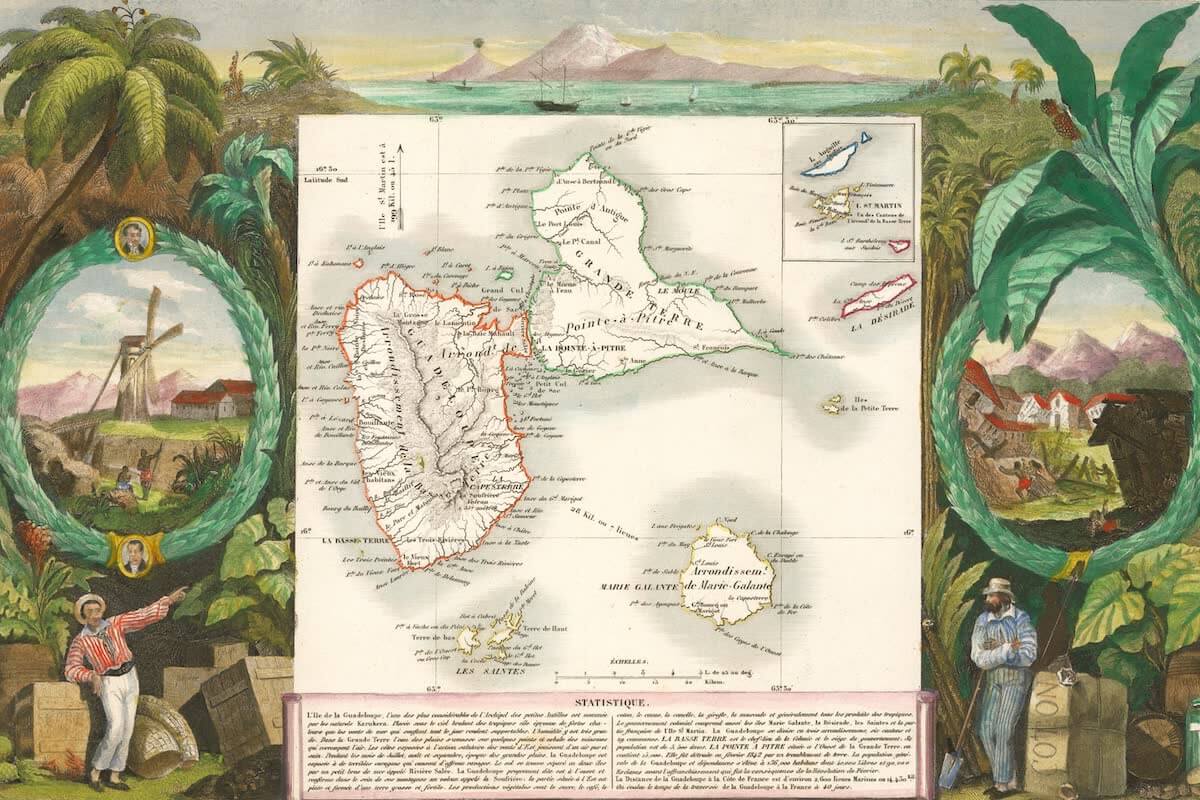 Guadeloupe is an archipelago as well as an overseas region of France in the Caribbean. It consists of six inhabited islands, Basse-Terre, Grande-Terre, Marie-Galante, La Desirade, and the Iles des Saintes, as well as many uninhabited islands and outcroppings. Christopher Columbus named the island Santa María de Guadalupe in 1493 after the Virgin Mary, venerated in the Spanish town of Guadalupe. Upon becoming a French colony, the Spanish name was retained though altered to French orthography and phonology. The islands are locally known as Gwada.

Originally the islands were first populated by indigenous peoples of the Americas about 5,000 years ago. Arawak people settled in the area, who were in turn replaced by the Kalina or Caribs around the year 300. The archipelago was called "Karukera" (or "The Island of Beautiful Waters") by the Arawak people, who settled on there in the year 300.

Christopher Columbus landed on the island in 1493. During the 1600s, the Kalina repelled Spanish settlers. The Compagnie des Iles de l'Amerique settled in Guadeloupe in 1635, took possession of the island, and brought in French farmers to colonize the land. This led to the death of many Caribs by disease and violence.

By 1640, the Compagnie des Iles de l'Amerique had gone bankrupt, and sold the land to Charles Houël du Petit Pre who began plantation agriculture, with the first African slaves arriving in 1650. Ownership of the island then passed to the French West India Company before it was annexed to France in 1674. Institutionalized slavery, enforced by the Code Noir from 1685, led to a booming sugar plantation economy.

During the Seven Years' War the English occupied Guadeloupe from the time of 1759 British Invasion of Guadeloupe until the 1763 Treaty of Paris. During this time Pointe-a-Pitre became a major harbor, and markets in Britain's North American colonies were opened to Guadeloupean sugar which was traded for cheap food and lumber. The economy expanded quickly, growing the wealth of colonists. During this time about 18,000 slaves were brought in. So prosperous was Guadeloupe at the time that under the 1763 Treaty of Paris France forfeited its Canadian colonies in exchange for Guadeloupe. Coffee planting began in 1770, increasing slavery, and by 1775 cocoa had become a major export product.

The 1789 French Revolution brought chaos to Guadeloupe. Under new revolutionary law free people of color were entitled to equal rights. In the anarchy that followed, the British invaded, to which the French responded by sending soldiers led by Victor Hugues who retook the lands and abolished slavery. In the Reign of Terror that followed more than 1,000 colonists were killed. In 1802 the First French Empire reinstated the pre-revolutionary government and slavery. In 1810 the British again seized the island, handing it over to Sweden in 1813. In the Treaty of Paris of 1814, Sweden ceded Guadeloupe to France, giving rise to the Guadeloupe Fund. In 1816 the Treaty of Vienna definitively acknowledged French control of Guadeloupe.

Six years after the final abolition of slavery in 1848, indentured servants from the French colony of Pondicherry in what is now India were brought in. Emancipated slaves had the vote from 1849, but French nationality and the vote was not granted to Indian citizens until 1921. In 1946, the colony of Guadeloupe became an overseas department of France.