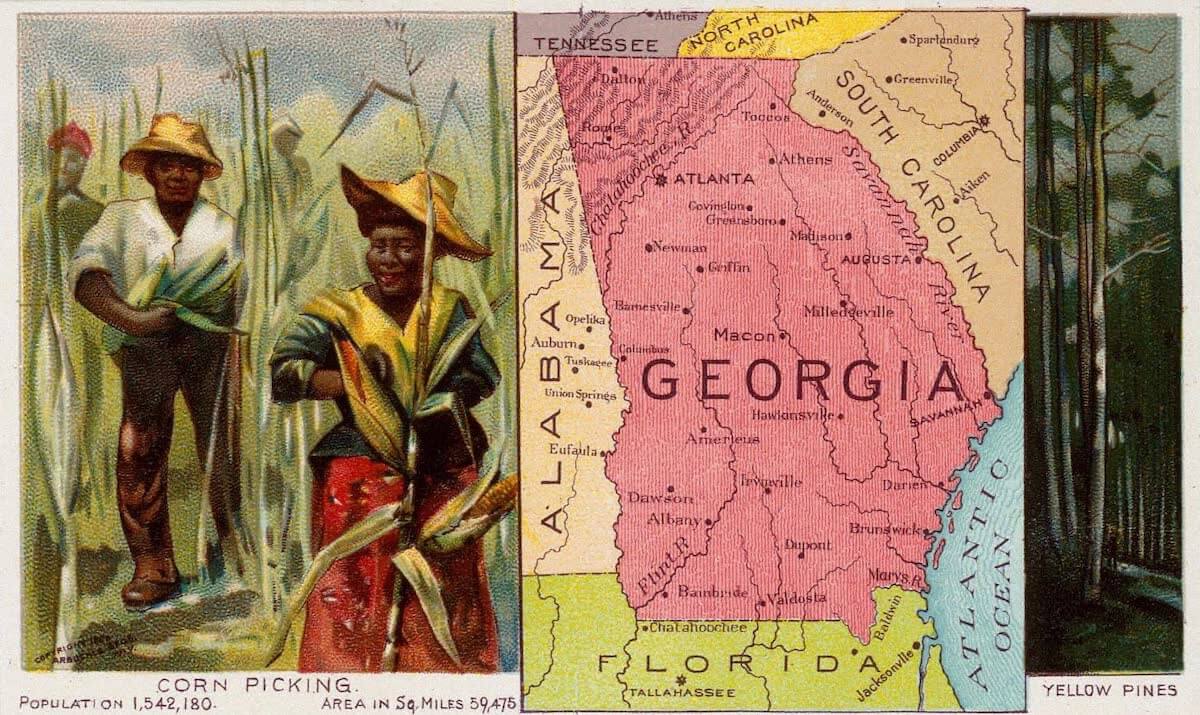 Georgia. Georgia is a southern, Atlantic state and the last settled of the original 13 colonies. It has an area of 59,475 square miles, being as large as England and Wales combined and nearly as large as all the New England States together. It is 320 miles long and 259 wide, and lies between Tennessee and North Carolina on the north; South Carolina and the Atlantic on the east; Florida on the south; and Alabama (with an angle of Florida) on the west.

Georgia, named in honor of George II of England, was founded by James Oglethorpe, an Englishman, who landed at Savannah in 1733. At that time the territory was occupied by the Cherokee Indians in the north and by the Creeks or Muscogees in the central and southern portions. With these tribes Oglethorpe established friendly relations. For 21 years Georgia existed under a colonial government. Georgia originally extended to the Mississippi, and until 1802 included the territory now embraced by Alabama and Mississippi.

Under the laws of the colony the introduction of rum and slaves was forbidden, and slavery was not introduced until 1749. In 1754 Georgia became a royal province, continuing such until the Revolution. In that struggle for freedom Georgia took an active part. Her representatives signed the Declaration of Independence, and on her soil some of the most important battles were fought. After the Revolution Georgia's increase in wealth and population was rapid. In 1861 Georgia seceded from the Union.

During the Civil War she furnished not less than 80,000 soldiers to the Confederate armies, and a large part of the gunpowder used by the southern troops was made in Augusta. During the war Georgia bore more than her share of misfortune. Great commercial depression was followed by actual deprivation. At the end of the war it was estimated that four fifths of the public wealth had been destroyed. In 1865 Georgia was placed under military rule, and its affairs were administered by a provisional government until 1870. Georgia has produced many distinguished men. Dr. Crawford W. Long was the first physician to use anesthesia, and Sydney Lanier ranks as one of the foremost American poets. Population 2,609,121.

Surface. The state lies both in the Appalachian and in the coastal-plain region, hence the surface is divided between highlands and lowlands. In the northern section the elevation is between 3,000 and 5,000 feet above the sea-level, the latter height being attained by only a few peaks, the highest of which is Sitting-Bull Mountain, 5,046 feet above the sea. An area of about 6,000 square miles in northern Georgia has an elevation of 1,000 feet or more. The lands bordering directly on the coast are flat and but slightly raised above the sea-level. The Okefenoke swamp in the southern part of the state is 45 miles long and 30 wide. The state is well-drained by rivers of moderate size. Among the larger of these are the Savannah River on the eastern boundary; the Oconee and the Ocmulgee, which form the Altamaha, in the central part of the state; and in the western section the Flint and the Chattahoochee, whose confluence forms the Appalachicola. The coast-line is indented by many deep inlets, some of which form excellent harbors. Separated from the mainland by a navigable channel is a chain of islands, some of them quite large, extending along the entire coast.

Climate. Of nine climatic belts found in the United States, eight are represented in Georgia. The lowest, found on the highest mountain peaks, has a mean annual temperature of less than 40°. Nearly all middle Georgia is in a climate-zone of between 60° and 65°, while that of the southern portion of the state ranges from 65° to 70°. The rainfall is greatest in the extreme north and smallest in the eastern part, averaging about 50 inches for the entire state.

Natural Resources. The forest-timbers of Georgia are many and valuable. An area of 16,000 square miles, chiefly in southern Georgia, is covered with forests of the long-leaf pine, while in the central and northern sections are immense forests of hardwoods, oak, hickory, maple and other varieties. From the pine-forests, besides the valuable timber, are produced large quantities of turpentine and rosin, almost equal in value to the timber-products. The state is divided into three main geological areas: the Paleozoic region in the northwest; the region of Crystalline rocks comprising the remainder of northern Georgia and continuing through the center of the state; and the coastal-plain region. In the Paleozoic area are found valuable deposits of coal, iron, manganese, roofing-slate and aluminum, while the rocks are mostly sandstones, limestones and shales. In the Crystalline area are found granites, gneisses and schists, while on the border of these two regions are found the marbles for which Georgia is famous in every section of the Union. Many magnificent buildings in every section of the United States are constructed of Georgia marble. Extensive and valuable clay-deposits exist in many parts of the state. These are used in the manufacture of bricks, terra-cotta, tiles, etc., while the finer clays are used for crockery and fine china. Gold, it is claimed, was first discovered in Georgia in Lumpkin County in 1828. The town of Dahlonega, in this county, is still the gold-mining center of the state. The other gold-producing counties are White, Dawson, Cherokee, Carroll, Hall, Gwinnett, Columbia and McDuffie. Other mineral products of the state are coal, iron, silver, copper, pyrite, asbestos, talc, mica, barite and marl. Extensive deposits of yellow ochre, used in the manufacture of paints, are foand near Cartersville, in Bartow County. There are a number of fine mineral springs in the state, among them Indian Spring, a sulphur spring in Butts County, and Bowden Lithia Springs in Douglas County. Throughout southern Georgia there are many artesian wells.

Agriculture. Agriculture is the leading industry. Owing to the variety of the climate and soil and the varying altitudes of the different sections, the state produces the greatest variety of crops of any state in the Union. In order of precedence the products of Georgia are cotton, corn, hay and grain, truck, horticulture, dairying and live-stock. In the swampy regions of southern Georgia and in the heavily timbered northern section there is much uncultivated land.

Georgia is the largest producer of sea-island cotton, although this variety covers less than five per cent. of its cotton-growing area. This cotton varies in price from 25 cents to 35 cents per pound. Georgia ranks second only to Texas in the production of cotton, the annual value of the crop being more than $100,000,000. Georgia's corn-crop in 1909 was valued at $52,598,000. Rice is an important crop in the coast-counties, about 8,000,000 bushels being produced annually. Sugar-cane is grown over the middle and southern section, the larger part of the crop being used in the manufacture of syrup. The state ranks first in the production of peaches and watermelons and second in peanuts and sweet-potatoes. Georgia has in its commercial orchards over 16,000,000 peach-trees, whose annual production is valued at over $5,000,000. The famous Elberta peach was originated by Mr. S. H. Rumph at Marshallville, Ga. Pecans are grown successfully in many sections. Tobacco is largely grown in the southern section of the state. Here is the largest tobacco-farm in the world, embracing 25,000 acres and employing 3,500 persons.

Manufactures. Georgia, because of her industrial importance, has long been known as the Empire State of the South. A number of conditions favor the growth of manufacturing interests, one of which is the great output of raw material and another the wide distribution of water-power. In the manufacture of bleached cotton-goods Georgia stands fourth in the Union. In 1909 there were 116 cotton-mills, and the value of the products amounted to more than $48,000,000. Thus the cotton industry, including cotton-seed products—oil and fertilizers—amounts to $100,000,000 annually. Other important manufactures are lumber-factories, printing-establishments, flour and grist-mills, woolen-mills, furniture-factories, foundries, carriage-factories, car-shops, manufactories of brick, tile and pottery. The state exceeds all others in the manufacture of cotton-gins.

Transportation and Commerce. Georgia has superior transportation-facilities The chief trade-centers are Atlanta, Savannah, Augusta, Macon, Columbus and Brunswick. Atlanta is at the junction of the streams of commerce from the northeast, the north and west. Augusta, Macon and Columbus are all situated at the head of steam-boat navigation in the rivers on which they are located. Savannah and Brunswick are the chief seaports of the state. Railway construction dates from 1833 when the Central of Georgia was built from Savannah to Macon. There now are 6,467 miles of railroad connecting the important cities and towns, and the rates of transportation are regulated by law.

Education. The public-school system was established in 1870, and it provides for instruction in the elementary branches at public expense for children between six and 18 years of age. The white and colored children are taught in separate schools. There is a board of education consisting of five members—the governor, the secretary of state, the attorney-general, the comptroller-general and the state school-commissioner. The last is the executive officer of the board. There is in each county a board of education, consisting of five members, elected by the grand jury, and a county school-commissioner, who supervises the county-schools and is elected by the county-board. In the cities and larger towns and in some counties the schools are operated under local laws, which provide for local taxation for schools. The state's public-school fund is about $2,500,000 yearly, and in addition to this over $1,800,000 is raised by local taxation and other means. There are about 740,000 children in the state, two thirds of whom are enrolled in the public schools and are instructed by about 12,600 teachers. In recent years there have been quite an awakened interest in education and much improvement in school-houses and school-work. The towns and cities and many rural communities maintain high-schools, and there are many excellent private preparatory schools.

The state university, established in 1785, is located at Athens. On the campus are located the following schools: Franklin College, State College of Agriculture and Mechanic Arts, State Law School and the College of Pharmacy. The following institutions also are branches of the university: The State Normal at Athens; the Georgia Normal and Industrial College at Milledgeville; the School of Technology at Atlanta; the North-Georgia Agricultural College at Dahlonega; the Georgia Medical College at Augusta; and the Georgia Normal and Industrial College for Colored Youths at Savannah; also, 11 district Agricultural High-Schools.

Emory College, located at Oxford was chartered in 1836, and is the property of the Methodist church. Mercer University, a Baptist college, is located at Macon, and was chartered in 1836. Wesleyan Female College, situated at Macon and belonging to the Methodist church, has the distinction of being the first female college in the world to confer degrees upon its graduates. Other important colleges are Shorter College at Rome; La Grange Female College at La Grange; Bessie Tift College at Forsyth; Southern Female College at College Park; Brenau College at Gainesville; Agnes Scott at Decatur; Lucy Cobb Institute at Athens. For colored students there are Atlanta University, Clark University, Atlanta Baptist College, Morris Brown College and Spellman Seminary, all in Atlanta.

There are no works available for the Georgia collection.