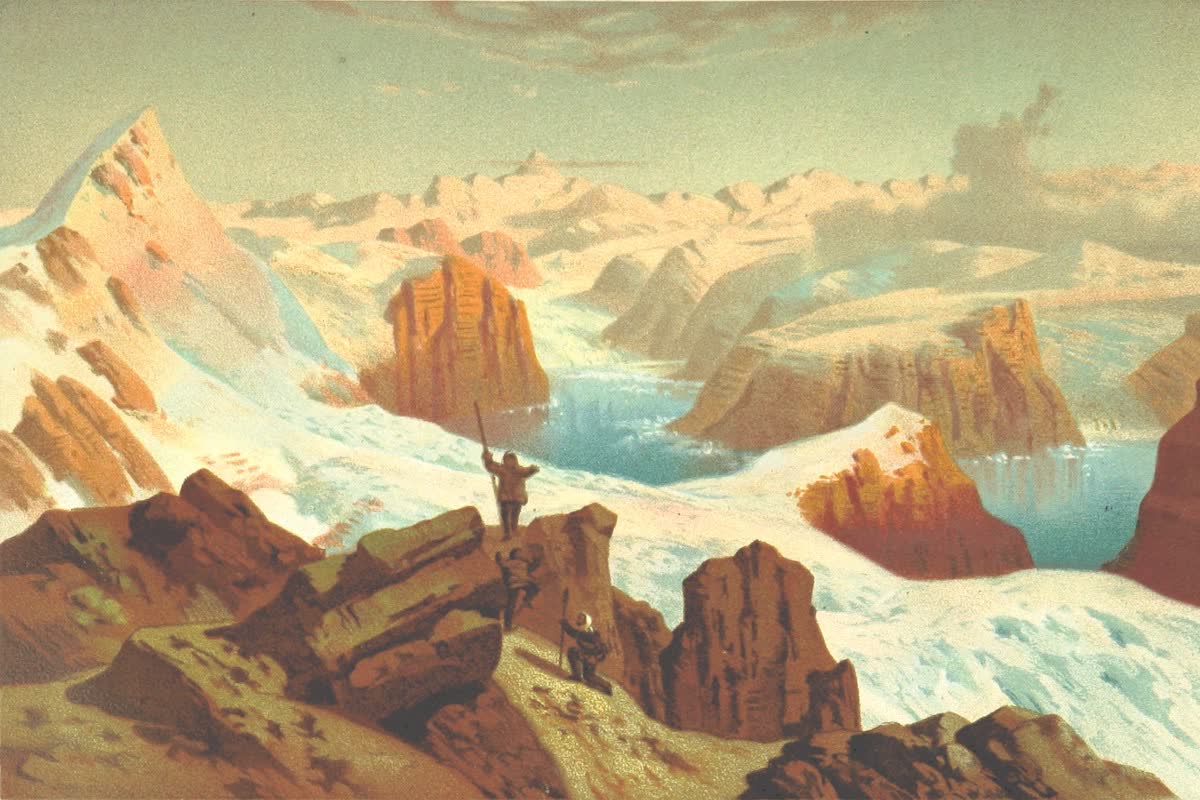 FRANZ JOSEF LAND, an arctic archipelago lying E. of Spitsbergen and N. of Novaya Zemlya, extending northward from about 80° to 85° N., and between 42° and 64° E. It is described as a lofty glacier-covered land, reaching an extreme elevation of about 2400 ft. The glaciers front, with a perpendicular ice-wall, a shore of debris on which a few low plants are found to grow—poppies, mosses and the like.

The islands are volcanic, the main geological formation being Tertiary or Jurassic basalt, which occasionally protrudes through the ice-cap in high isolated blocks near the shore. A connecting island-chain between Franz Josef Land and Spitzbergen is probable. The bear and fox are the only land mammals; insects are rare; but the avifauna is of interest, and the Jackson expedition distinguished several new species.

August Petermann expressed the opinion that Baffin may have sighted the west of Franz Josef Land in 1614, but the first actual discovery is due to Julius Payer, a lieutenant in the Austrian army, who was associated with Weyprecht in the second polar expedition fitted out by Count Wilczek on the ship "Tegetthof" in 1872. On the 13th of August 1873, the "Tegetthof" being then beset, high land was seen to the north-west. Later in the season Payer led expeditions to Hochstetter and Wilczek islands, and after a second winter in the ice-bound ship, a difficult journey was made northward through Austria Sound, which was reported to separate two large masses of land, Wilczek Land on the east from Zichy Land on the west, to Cape Fligely, in 82° 5? N., where Rawlinson Sound branched away to the north-east.

Cape Fligely was the highest latitude attained by Payer, and remained the highest attained in the Old World till I895. Payer reported that from Cape Fligely land (Rudolf Land) stretched north-east to a cape (Cape Sherard Osborn), and mountain ranges were visible to the north, indicating lands beyond the 83rd parallel, to which the names King Oscar Land and Petermann Land were given. In 1879 De Bruyne sighted high land in the Franz Josef Land region, but otherwise it remained untouched until Leigh Smith, in the yacht "Eira," explored the whole southern coast from 45° to 54° E. in 1881 and 1882, discovering many islands and sounds, and ascertaining that the coast of Alexandra Land, in the extreme west, trended to north-west and north.

After Leigh Smith came another pause, and no further mention is made of Franz Josef Land till 1894. In that year Mr Alfred Harmsworth (afterwards Lord Northcliffe) fitted out an expedition in the ship "Windward" under the leadership of Mr F. G. Jackson, with the object of establishing a permanent base from which systematic exploration should be carried on for successive years and, if practicable, a journey should be made to the Pole.

Mr Jackson and his party landed at "Elmwood" (which was named from Lord Northcliffe's seat in the Isle of Thanet), near Cape Flora, at the western extremity of Northbrook Island, on the 7th of September. After a preliminary reconnaissance to the north, which afterwards turned out to be vitally important, the summer of 1895 was spent in exploring the coast to the north-west by a boating expedition. This expedition visited many of the points seen by Leigh Smith, and discovered land, which it has been suggested may be the Gillies Land reported by the Dutch captain Gillies in 1707.

In 1896 the Jackson-Harmsworth expedition worked northwards through an archipelago for about 70 m. and reached Cape Richthofen, a promontory 700 ft. high, whence an expanse of open water was seen to the northward, which received the name of Queen Victoria Sea. To the west, on the opposite side of a wide opening which was called the British Channel, appeared glacier-covered land, and an island lay to the northward. The island was probably the King Oscar Land of Payer. To north and north-east was the land which had been visited in the reconnaissance of the previous year, but beyond it a water-sky appeared in the supposed position of Petermann Land. Thus Zichy Land itself was resolved into a group of islands, and the outlying land sighted by Payer was found to be islands also.

Meanwhile Nansen, on his southward journey, had approached Franz Josef Land from the north-east, finding only sea at the north end of Wilczek Land, and seeing nothing of Payer’s Rawlinson Sound, or of the north end of Austria Sound. Nansen wintered near Cape Norway, only a few miles from the spot reached by Jackson in 1895. He had finally proved that a deep oceanic basin lies to the north. On the 17th of June 1896 the dramatic meeting of Jackson and Nansen took place, and in the same year the “Windward” revisited “Elmwood” and brought Nansen home, the work of the Jackson-Harmsworth expedition being continued for another year. As the non-existence of land to the north had been proved, the attempt to penetrate northwards was abandoned, and the last season was devoted to a survey and scientific examination of the archipelago, especially to the west; this was carried out by Messrs Jackson, Armitage, R. Koettlitz, H. Fisher and W. S. Bruce.

Further light was thrown on the relations of Franz Josef Land and Spitsbergen during 1897 by the discoveries of Captain Robertson of Dundee, and Wyche’s Land was circumnavigated by Mr Arnold Pike and Sir Savile Crossley. The latter voyage was repeated in the following year by a German expedition under Dr Th. Lerner and Captain Rüdiger. In August 1898 an expedition under Mr Walter Wellman, an American, landed at Cape Tegetthof. Beginning a northward journey with sledges at the end of the winter, Wellman met with an accident which compelled him to return, but not before some exploration had been accomplished, and the eastern extension of the archipelago fairly well defined.

In June 1899 H.R.H. the duke of Abruzzi started from Christiania in his yacht, the “Stella Polare,” to make the first attempt to force a ship into the newly discovered ocean north of Franz Josef Land. The “Stella Polare” succeeded in making her way through the British Channel to Crown Prince Rudolf Land, and wintered in Teplitz Bay, in 81° 33? N. lat. The ship was nearly wrecked in the autumn, and the party had to spend most of the winter on shore, the duke of Abruzzi suffering severely from frost-bite. In March 1900 a sledge party of thirteen, under Captain Cagni, started northwards. They found no trace of Petermann Land, but with great difficulty crossed the ice to 86° 33? N. lat., 20 m. beyond Nansen’s farthest, and 240 m. from the Pole. The party, with the exception of three, returned to the ship after an absence of 104 days, and the “Stella Polare” returned to Tromsö in September 1900. In 1901–1902 the Baldwin-Ziegler expedition also attempted a northward journey from Franz Josef Land.