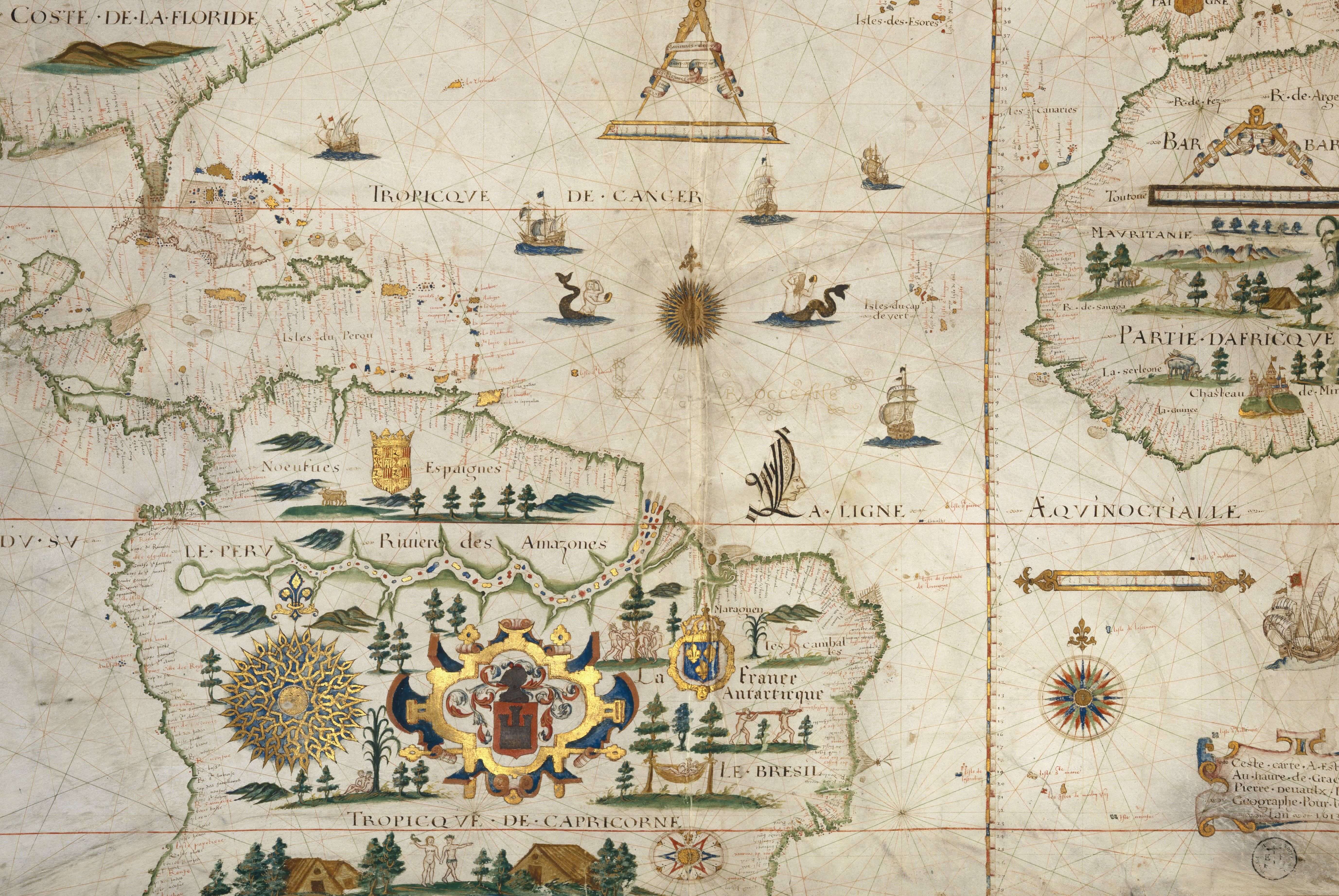 France Antarctique (formerly also spelled France antartique) was a French colony south of the Equator, in Rio de Janeiro, Brazil, which existed between 1555 and 1567, and had control over the coast from Rio de Janeiro to Cabo Frio. The colony quickly became a haven for the Huguenots, and was ultimately destroyed by the Portuguese in 1567.

Europeans first arrived in Brazil in April 1500, when a fleet commanded by Pedro Alvares Cabral on behalf of the Portuguese crown arrived in present-day Porto Seguro, Bahia. Except for Salvador (the first Brazilian capital city) and Sao Vicente (the first Portuguese settlement), however, the territory still remained largely unexplored half a century later.

Early expeditions of French Norman sailors to the New World have been suggested: Jean Cousin has been said to have discovered the New World in 1488, four years before Christopher Columbus, when he landed in Brazil around the mouth of the Amazon, but this remains unproven. His travels were succeeded by that of Binot Paulmier de Gonneville in 1504 onboard L'Espoir, which was properly recorded and brought back a Native American person named Essomericq. Gonneville affirmed that when he visited Brazil, French traders from Saint-Malo and Dieppe had already been trading there for several years.

France continued to trade with Portugal, especially loading Brazilwood (Pau-Brasil), for its use as a red dyes for textiles. In 1550, in the royal entry for Henry II of France, at Rouen, about fifty men depicted naked Indians and a battle between the Tupinamba allies of the French, and the Tabajaras Indians. On November 1, 1555, French vice-admiral Nicolas Durand de Villegaignon (1510-1575), a Catholic knight of the Order of Malta, who later would help the Huguenots to find a refuge against persecution, led a small fleet of two ships and 600 soldiers and colonists, and took possession of the small island of Serigipe in the Guanabara Bay, in front of present-day Rio de Janeiro, where they built a fort named Fort Coligny. The fort was named in honor of Gaspard de Coligny (then a Catholic statesman, that about a year later would become a Huguenot), an admiral who supported the expedition and would later use the colony in order to protect his Reformed co-religionists.

To the still largely undeveloped mainland village, Villegaignon gave the name of Henriville, in honour of Henry II, the King of France, who also knew of and approved the expedition, and had provided the fleet for the trip. Villegaignon secured his position by making an alliance with the Tamoio and Tupinamba Indians of the region, who were fighting the Portuguese. Unchallenged by the Portuguese, who initially took little notice of his landing, Villegaignon endeavoured to expand the colony by calling for more colonists in 1556. He sent one of his ships, the Grande Roberge, to Honfleur, entrusted with letters to King Henry II, Gaspard de Coligny and according to some accounts, the Protestant leader John Calvin.

After one ship was sent to France to ask for additional support, three ships were financed and prepared by the king of France and put under the command of Sieur De Bois le Comte, a nephew of Villegaignon. They were joined by 14 Calvinists from Geneva, led by Philippe de Corguilleray, including theologians Pierre Richier and Guillaume Chartrier. The new colonists, numbering around 300, included 5 young women to be wed, 10 boys to be trained as translators, as well as 14 Calvinists sent by Calvin, and also Jean de Lery, who would later write an account of the colony. They arrived in March 1557. The relief fleet was composed of:

The Grande Roberge, with about 120 on board, captained by Sieur de Sainte-Marie dit l'Espine.

The Rosee, with about 90 people, led by Captain Rosee

Doctrinal disputes arose between Villegaignon and the Calvinists, especially in relation to the Eucharist, and in October 1557 the Calvinists were banished from Coligny island as a result. They settled among the Tupinamba until January 1558, when some of them managed to return to France by ship together with Jean de Lery, and five others chose to return to Coligny island where three of them were drowned by Villegaignon for refusing to recant.

In 1560 Mem de Sa, the new Governor-General of Brazil, received from the Portuguese government the command to expel the French. With a fleet of 26 warships and 2,000 soldiers, on 15 March 1560, he attacked and destroyed Fort Coligny within three days, but was unable to drive off their inhabitants and defenders, because they escaped to the mainland with the help of the Native Brazilians, where they continued to live and to work. Admiral Villegaignon had returned to France in 1558, disgusted with the religious tension that existed between French Protestants and Catholics, who had come also with the second group (see French Wars of Religion).

Urged by two influential Jesuit priests who had come to Brazil with Mem de Sa, named Jose de Anchieta and Manuel da Nobrega, and who had played a big role in pacifying the Tamoios, Mem de Sa ordered his nephew, Estacio de Sa to assemble a new attack force. Estacio de Sa founded the city of Rio de Janeiro on March 1, 1565, and fought the Frenchmen for two more years. Helped by a military reinforcement sent by his uncle, on January 20, 1567, he imposed final defeat on the French forces and decisively expelled them from Brazil, but died a month later from wounds inflicted in the battle. Coligny's and Villegaignon's dream had lasted a mere 12 years. Largely in response to the two attempts of France to conquer territory in Brazil (the other one was named France equinoxiale and occupied present-day Sao Luis, state of Maranhao), between 1612 and 1615, the Portuguese crown decided to expand its colonization efforts in Brazil.

Other projects were made for the occupation of parts of Brazil in 1579, following the death of Sebastian of Portugal at the Battle of Alcacer Quibir, and also in 1582 under Admiral Filippo di Piero Strozzi, cousin of Catherine de Medicis. During that period the crowns of Spain and Portugal were united under the same king, the Dutch attacked and captured Salvador de Bahia and the island of Fernando de Noronha, but a Portuguese-Spanish fleet very soon recovered those cities.

In the 17th century, France again briefly established a colony in Brazil with the establishment of France Equinoxiale.

On 21 September 1711, in the 11-day Battle of Rio de Janeiro, Rene Duguay-Trouin captured Rio de Janeiro, then believed impregnable, with twelve ships and 6,000 men, in spite of the defence consisting of seven ships of the line, five forts and 12,000 men; he held the governor for ransom. Investors in this venture doubled their money, and Duguay-Trouin earned a promotion to Lieutenant general de la Marine.

History of a voyage to the land of Brazil, otherwise called America by Jean de Lery, p.5ff

Francis Parkman, Pioneers of France in the New World, University of Nebraska Press, 1996.