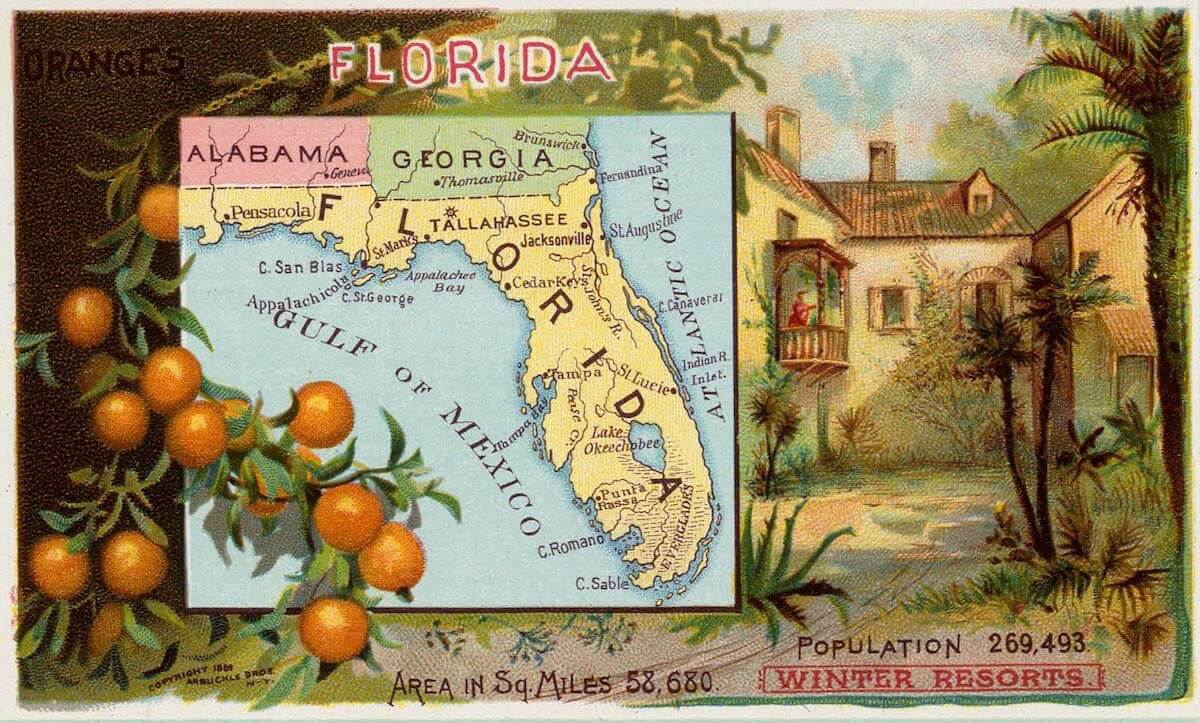 Florida, meaning the land of flowers, is the most southern portion of the United States. It is a peninsula, bordered by the Atlantic Ocean and the Gulf of Mexico. It covers an area of 58,680 square miles of which 4,400 square miles are water, and is about 450 miles long and 100 broad. Florida was discovered in 1512 by Ponce de Leon, when searching for the fountain of youth, and named by him the land of flowers.

It was explored by De Soto in 1539, and in 1562 a colony of Huguenots settled there, who were massacred by the Spaniards. The first permanent settlement was made at St. Augustine, which is almost the oldest city in the United States, by Spaniards, who kept possession of the territory until 1763, when it was ceded to England in exchange for Cuba. From 1781 until 1819 Spain held the country again. Florida was ceded to the United States in 1819, organized as a territory in 1822, and admitted into the Union in 1845. From 1835 to 1842 it suffered from the struggle with the Seminole Indians, which ended with the removal of the tribe to Indian Territory. The state seceded in 1861, and was readmitted in 1868. Population 752,619.

The state has developed rapidly within the last few years, and has become a popular winter-resort. Tallahassee is the capital, and Jacksonville, St. Augustine, Key West, Tampa and Pensacola are prominent cities. The revenue and disbursements about balance at $1,500,000 each, annually. Besides saving-banks, Florida has a number of state banks, with resources (exclusive of national banks) aggregating $15,000,000. In May, 1901, Jacksonville suffered severely from a conflagration, which destroyed nearly $15,000,000 worth of property.

Surface and Drainage. It is for the most part a swampy region; its lakes, which number about 1,200, and marshes and swamps covering about a fifteenth of the state. The Everglades are an example of these swamps. The Okeechobee is the largest lake. As a peninsula, it has a very long coast-line, of about 1,150 miles, with harbors at Fernandina, St. Augustine, Key West, Cedar Keys, Tampa and Pensacola Bay; it also has innumerable islands. There are 19 navigable rivers, the longest being the St. John's. This river is about 300 miles in length, one third of which can be navigated.

Climate. The climate is very healthful, and not intensely hot, being moderated by the sea breezes. There are 250 clear days in the year.

Natural Resources. With its extensive coast-line, Florida has a large fish-trade, the chief seat of which (in fresh fish) is Pensacola. About 8,000 men are employed in the fisheries. Alligator-hides are obtained here, besides sponge and coral. Of minerals, the most important is phosphate-rock, the value of this product amounting yearly to over $4,250,000. Mineral waters, lime and fullers' earth also are among its exports. There are said to be 25,000,000 acres of forest-land, upon which is found a very great variety of trees. Among these are hickory, live oak, long-leaved pine, pitch-pine, cypress, the wild orange, Indian almond, mahogany, satin-wood etc.

Products. The products are lemons, oranges, pineapples, figs, bananas, cocoanuts and other tropical fruits, with coffee, rice, cotton, tobacco, sea-island cotton, sweet and irish potatoes, melons, sugar-cane, peanuts and cassava, besides corn and other cereals for local use. Its most important crops, however, are oranges and pineapples.

Industries and Manufactures. Market-gardening and fruit-raising for the northern markets are among the principal industries, which also include the preparation of pine and live-oak timber used in shipbuilding, cigar-making, the production of turpentine, tar, resin and pitch, cotton-seed oil and sponge and coral fisheries. The manufactures of the state amounted in value to over $72,000,000 in 1909. These, besides the forest-products include fertilizers, cotton-seed oil, wooden boxes and barrels and cedar for lead-pencils; but the leading industry is the manufacture of tobacco and cigars. In 1910 the assessed valuation of property in the state exceeded $177,000,000.

Education. There are numerous colleges and public schools, including the University of Florida, at Gainesville, State College for Women and Agricultural College for Negroes, at Tallahassee, all having normal departments, and School for the Deaf and Blind, at St. Augustine. There are also private and denominational schools, among them being Rollins College and the John B. Stetson University, the latter affiliated with Chicago University, The public schools have a teaching staff of 4,500 and about 155,000 pupils.

See The Florida of To-day by J. W. Davidson.