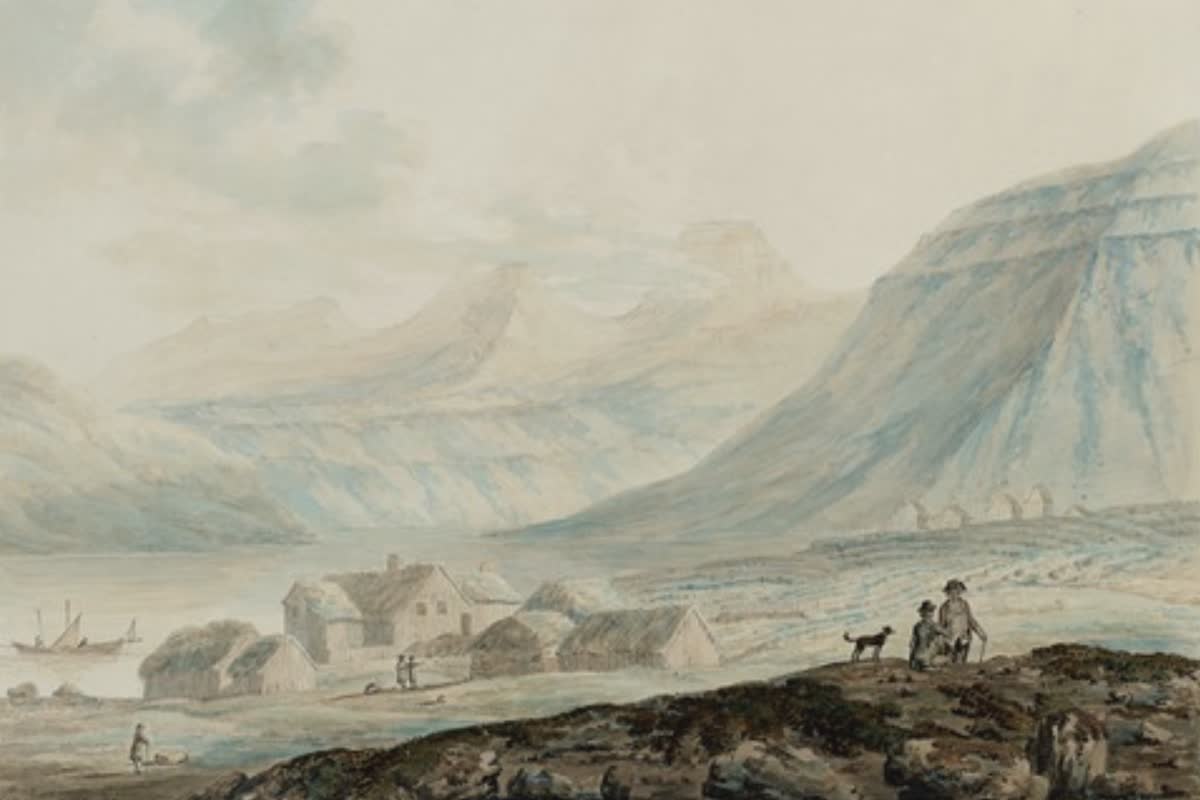 The Faroe Islands are a group of Danish islands rising from the sea some four hundred miles west of Norway and almost as far south of Iceland. It embraces fourteen inhabited and several uninhabited islands with an area of 500 square miles. Of this one-third belongs to Strömö. This archipelago is divided by a number of small sounds and consists of dark grey rocks which form plateaux usually about 300 yards high.

These plateaux slope towards the sea, are fissured by streams and are here and there surmounted by lofty peaks (Slattaretinden) over 2400 ft. The sky is usually clouded, showers and storms are frequent The surging waters make navigation dangerous generally in winter. The climate is oceanic, but as the summer heat rarely rises above 10 degree and the soil is poor, agriculture is possible only in sheltered spots.

Trees are few in number, but shrubs flourish in more abundance. The chief wealth and attraction of the islands are found in their flowery pastures, while the herds of sheep which graze upon them have given their name to the archipelago. Upwards of 100,000 of these animals live always in the open air and are famous for the superior quality of their wool. A few small, raw-boned horses are employed solely as beasts of burden, for roads are unknown nor is any shelter provided for them. More attention is paid to the horned cattle which number about 5000. Besides the above mentioned quadrupeds, rats and mice are the only land animals or mammals to be found. Many species of birds and in great numbers haunt the islands. The surrounding waters abound in delicious fish and whales and dolphins rich in blubber. The yearly catch of the round-headed dolphin alone (the Grind) amounts to a thousand. Reptiles and frogs are unknown, and there are but few insects.

The 16,000 inhabitants of the Faroe Islands are all Lutherans. They speak a dialect akin to the Old Norse, but Danish is used in public life, the schools, and the churches. The fisheries, cattle-breeding, and the more perilous bird-catching are the chief sources of income. The few local industries scarcely suffice for the needs of the natives. Turf is used for fires, there being no coal. There is considerable commerce. The exports are fish, blubber, meat, wool, feathers, and down; the imports are wood, coal, and large quantities of cereals and fruit. Thorshaven on Strömö is the capital and seat of government, and has a Realschule, or technical school. Throughout the rest of this island there are only wooden huts covered with turf.

From the work of Dicuil, an Irish monk, "De Mensurâ orbis terrae" (ed. Parthey, Berlin, 1872), written in the nineth century, we learn that the islands were discovered by Irish monks. Not long after this they were colonized by Normans. Herold Schonhaar (872-930) united them with the Kingdom of Norway and this was their political condition until 1814. Olaf Tryggvason converted the people to Christianity; as early as 1076 they had a bishop of their own. The bishops of the Faroe islands were usually chosen from the canons of Bergen, and were originally suffragans of Hamburg-Bremen, later of Lund (1104), finally (since 1152) of the Primate of Norway in Trondjem. There were in all twenty-three Catholic bishops, from Gunmund to Amund Olafson.

The latter was forced to yield to the Lutheran superintendent Jens Riber, who also took over the episcopal title. Later on only "provosts" were elected. The Catholic clergy remained steadfast in their faith, but were unable to resist the advance of Protestantism. By the end of sixteenth century the Catholic faith had disappeared; all later attempts to revive it proved vain. The mission founded some years ago in Thorshaven was abandoned and the few (mostly transient) Catholics on the land were attended once a year from Copenhagen. In the Catholic epoch, at least, no little attention paid to the construction and adornment of churches, as may be seen from the ruins of the unfinished cathedral of Kirkebö. The thick basaltic walls broken by high, massive windows are evidence that the original builders meant to erect a noble Gothic church. It remained unfinished because under the "new Gospel" the generosity of the faithful was soon extinguished. A small stone church of the twelfth century serves yet for Protestant worship. It contains sculpture belonging to Pre-Reformation times.