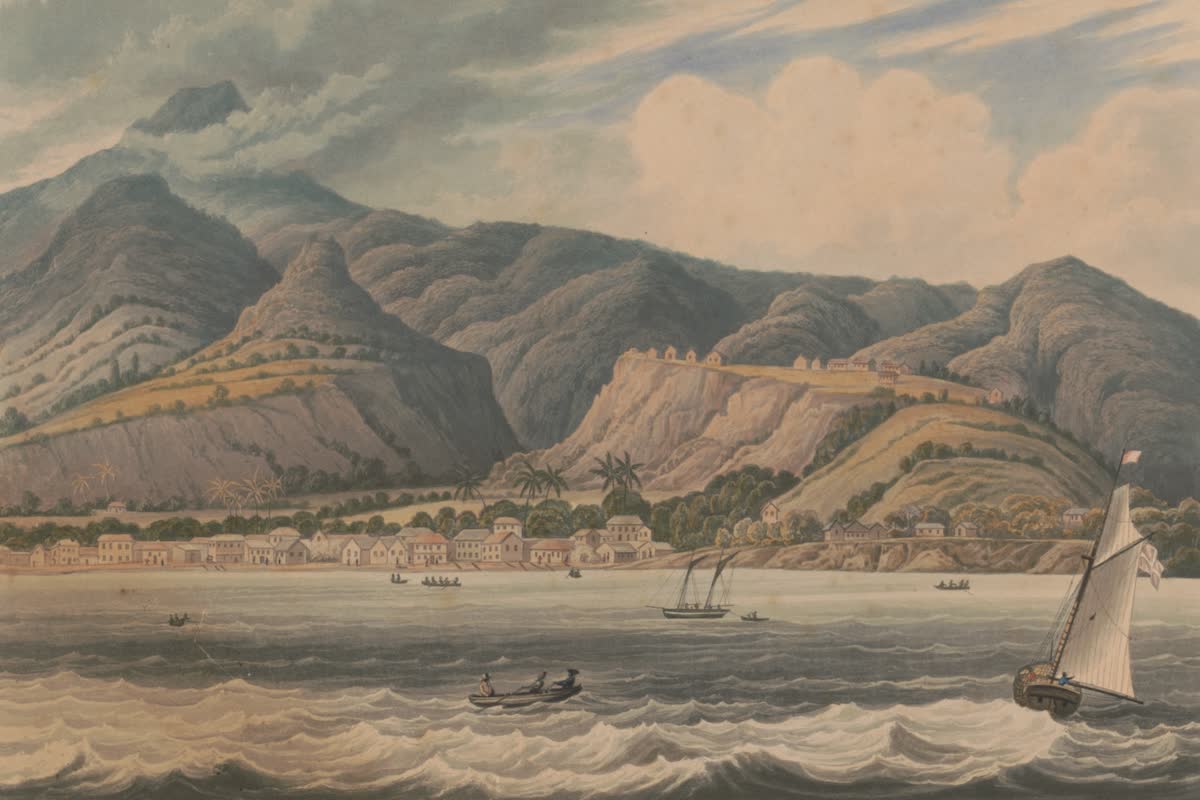 DOMINICA, the largest of the five presidencies in the colony of the Leeward Islands, British West Indies. It lies in 15° 30? N. and 61° 20? W., between the French islands of Martinique and Guadeloupe, at a distance of about 25 m. from each, is 29 m. long, has a maximum breadth of 16 m. and an area of 291 sq. m. A range of lofty rugged mountains traverses the island from N. to S., broken in the centre by a narrow plain drained by the rivers Layou and Pagoua, flowing W. and E. respectively.

The highest point is Morne Diablotin (5314 ft.), situated in the northern half of the range. Signs of volcanic activity abound in the shape of solfataras, subterranean vapours and hot springs; while in the south is the greatest natural curiosity, the renowned Boiling Lake. It lies on the mountain side, 2300 ft. above the sea, its banks are steep and its depth unknown, being more than 300 ft. at a short distance from the margin. Its seething waters are often forced 3 ft. above the normal level by the pressure of the escaping gases; and the fumes rising from the lake are occasionally poisonous.

The island is botanically remarkable for its great number of peculiar species, offering in this respect a marked contrast to the poverty of the adjacent islands. The hills are covered with valuable timber, while coffee, limes, oranges, india-rubber trees, spices and all tropical fruits grow luxuriantly in the rich brown mould of the lowlands. There are some thirty streams of considerable size, besides numerous mountain torrents, and this abundance of water renders the island very fertile. The fisheries are productive, and honey and wax are furnished by wild bees, originally introduced from Europe. The temperature varies from 78° to 86° F. in the hot season from August to October, and from 72° to 84° in the cooler months; the rainfall varies in different parts from 50 to 162 in. per annum, but the porous soil soon absorbs the rain, rendering the atmosphere dry and invigorating.

The manufactures include sugar, lime-juice and essential oils; the exports are coffee, cocoa, sugar, limes and lime-juice, essential oils and fruit of all kinds. The inhabitants in 1901 numbered 28,894. The majority are negroes; the whites are of French and British descent. There are also a few Caribs, the remnant of the aboriginal population. A French patois is the language of the peasantry, but English is generally understood. The capital, Roseau (5764), is a fortified town and a port; Portsmouth, the only other town, possesses the better harbour in Prince Rupert’s Bay on the north-west. In religion the Roman Catholics predominate, and a bishop resides at Roseau, but there is no established church. Education is free and compulsory, and the Cambridge local examinations are held annually.

Dominica was so named on its discovery by Columbus in 1493, in commemoration of the date, Sunday (Dies Dominica) the 3rd of November. Dominica was included in the grant of various islands in the Caribbean Sea made in 1627 by Charles I. to the earl of Carlisle, but the first European settlers (1632) were French. They brought with them negro slaves and lived on terms of friendship with the Caribs, who were then a numerous body.

In 1660 a treaty appears to have been made between the French, British and the natives assigning St Vincent and Dominica to the Caribs, but shortly afterwards attempts were made by the British to gain a foothold in the island. These attempts failed, and in 1748 it was once more agreed by France and Great Britain that Dominica should be left in the undisturbed possession of the natives. Nevertheless the French settlers increased, and the island came under the rule of a French governor.

Dominica was captured by the British in 1761 and formally ceded by France at the peace of Paris, 1763, French settlers being secured in their estates. In 1778 a French force from Martinique seized the island. Rodney’s victory over De Grasse in the neighbouring sea in 1782 was followed by the restoration of the island to Britain in 1783; in the interval the trade of Dominica had been ruined. In 1795 a force from Guadeloupe made an unsuccessful descent on the island, and in 1805 the French general La Grange, at the head of 4000 troops, took Roseau and pillaged the island—an event now remembered as the most memorable in its history. The French were, however, unable to make good their hold, and Dominica has remained since undisturbed in British possession. Its later history presents few features not common to the other British West Indian islands.

Since 1872 Dominica has formed part of the colony of the Leeward Islands, but local affairs are in the hands of an administrator, aided by an executive council of ten members. In 1898 the local legislature, in consideration of pecuniary assistance from Great Britain, passed an act abrogating the semi-elective constitution and providing for a legislative council of twelve nominated members, six of whom sit ex officio.