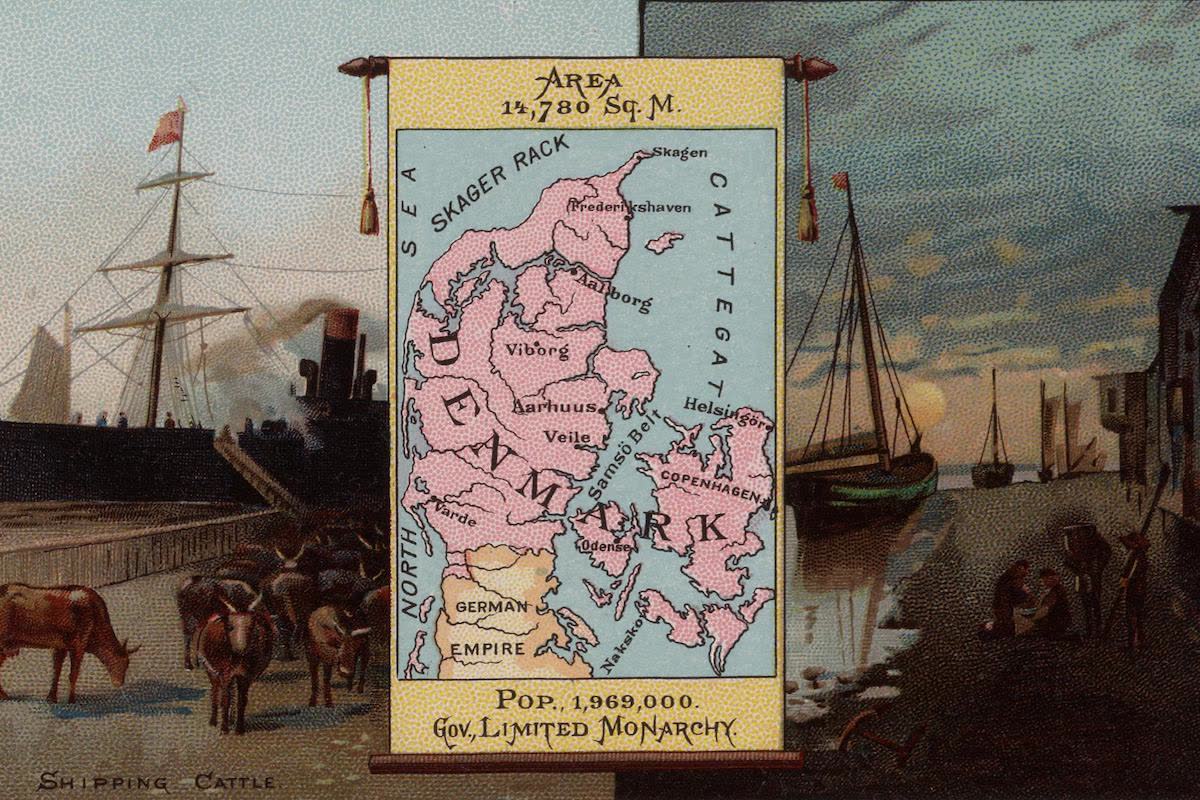 Denmark, the smallest of the three Scandinavian kingdoms, consists of the peninsula of Jutland and a group of islands in the Baltic. Besides Denmark proper, under the rule of the Danish king, are now the Faroe Islands, Iceland, Greenland and the Danish West Indies of St. Thomas, St. Croix and St. John. The area of Denmark proper is 15,592 square miles; that of Iceland, Greenland and the West Indies 86,634 square miles, with a total population of 2,775,076. Denmark is separated from Norway on the north by the Skager Rack, from Sweden on the east by the Sound and the Cattegat, and on the south it is bounded by the Prussian provinces of Schleswig-Holstein.

Denmark's history goes back to the dim twilight of the saga-period, out of which loom the figures of its heroes, their brave deeds and daring voyages. Here the Celts first had their home, and from these shores the Angles and Saxons set sail in the fifth century to conquer England; while in their place the Danes of Zealand settled on the deserted lands.

The missionary Ansgar baptized a Danish king as a Christian in 826, but their being Christians did not hinder the Danes from making their usual inroads into the territory of the Franks or check the piratical voyages of the famous vikings. Gorm the Old, who first united the islands and the mainland under one rule, opposed Christianity; but Canute, his grandson, the Conqueror of England, was its zealous friend. During the reigns following that of Canute, the nobles grew powerful by means of the feudal system and ground down the once free people to serfs. Waldemar I (1157-1182) conquered Norway; while Waldemar II conquered German lands, which were lost under his successors.

The great Queen Margaret (1375-1412) ruled Denmark, Norway and Sweden so well that for once the three rival Scandinavian kingdoms lived together quietly and peaceably. Christian I (1448-81), the founder of the Oldenburg line of kings, which maintained itself on the throne until 1863, was chosen king by the people, who in this case used their ancient right of election to the throne. Christian II (1513-23) was such a tyrant that he lost his throne and his freedom; the Danes chose his uncle, Frederick I, to be their king, while Sweden was forever separated from Denmark.

Under Christian IV, an able ruler handicapped by the opposition of the nobles, the Danish possessions still held in Sweden were lost, and with them the undivided control of the Sound. By the 18th century the peasants had become free from serfdom and the laws were better carried out. Copenhagen was bombarded in 1801 by the British under Nelson. A second British bombardment took place in 1807, when the Danish fleet was surrendered. From this time till 1813 Denmark was in the hands of Napoleon. Then she was forced to cede Norway to Sweden.

In 1864 Prussia and Austria, as the heads of the German confederation, at the point of the bayonet, forced this weak state, deserted by its allies, England and France, to give up Lauenburg, Holstein and Schleswig. Extensively dismembered as she has been, Denmark has, however, prospered through the steady and combined industries of her thrifty people. Christian IX, who came to the throne in 1863, died on Jan. 29, 1906, and was succeeded by his son who reigned as Frederick VIII until his death May 14, 1912.

Surface and Drainage. The greater part of Denmark proper is low, the highest point being less than 600 feet above the sea. The coast is usually flat, skirted by sand-ridges and shallow lagoons. On the east coast are many bays useful for navigation and valuable for their fisheries, and there are many good harbors. There are no rivers, though the canals are important.

Climate. Mists and sea-fogs are frequent, and rain, snow or hail on an average 150 days in a year. In the spring a cold, dry wind, called the skai, whirls clouds of fine sand from the coast inland, doing great damage to the crops.

Natural Resources. The commonest tree is the beech, which nowhere flourishes as it does in Denmark, though 300 years ago, the now rare oak was the great Danish tree. Denmark is poor in minerals. Peat from the many bogs, brown coal or lignite and seaweed take the place of wood as fuel. The value of the fisheries in one year exceeded 10 million dollars.

Agriculture. About 80 per cent. of Denmark is good soil, and nearly half the people are farmers. The land for the most part is parceled out into small holdings. The main crops are oats, barley and rye; wheat, flax, hemp, potatoes, butter and bacon are other leading products. Cattle, horses, sheep and goats are raised in sufficient numbers for exportation.

Manufactures. While Danish manufactures are not of great importance, the state in 1910 had 28 distilleries, whose brandy-output was 3,300,699 gallons. Other important manufactures are beer, beet-sugar and oleomargarine.

Education. The people are well-educated. Parents are compelled to send their children to school between the ages of 7 and 14 years. There are over 3,000 elementary schools, with 370,000 pupils, beside 80 high, 31 Latin and 19 agricultural schools. There are a Royal Academy of Arts, having 10 teachers and 300 pupils, and a Polytechnic Institution with a faculty numbering 40 and 600 students. The University of Copenhagen has 95 professors and about 2,000 students, and there are numerous colleges and other advanced schools.

Government and Religion. The established religion, to which the king must belong, is Lutheranism. Denmark is a constitutional monarchy, the king having a cabinet of eight ministers. The king was chosen by the people until 1660, when people and clergy, driven by hatred of the nobles, gave the king absolute power and made the crown hereditary. A constitution was afterward granted to the nation. The present form of government was adopted in 1849. The national legislature or rigsdag, consists of the upper house or landsthing and the lower house or folkething, which is chosen by the people.

Army and Revenue. The army numbers some 14,000; the war-strength is 50,000; and the navy, which is small and chiefly engaged in coast defense, comprises three monitors, three torpedo-gunboats and seven torpedo-boats. The revenue about equals the expenditure—about 100 million kroners annually. (The nominal value of the kroner is 25 cents.) The state in 1911 had about 2,120 English miles of railway, 1,212 miles of which it owned; 7,979 miles of telegraph lines, and 255,141 miles of telephonic wires.