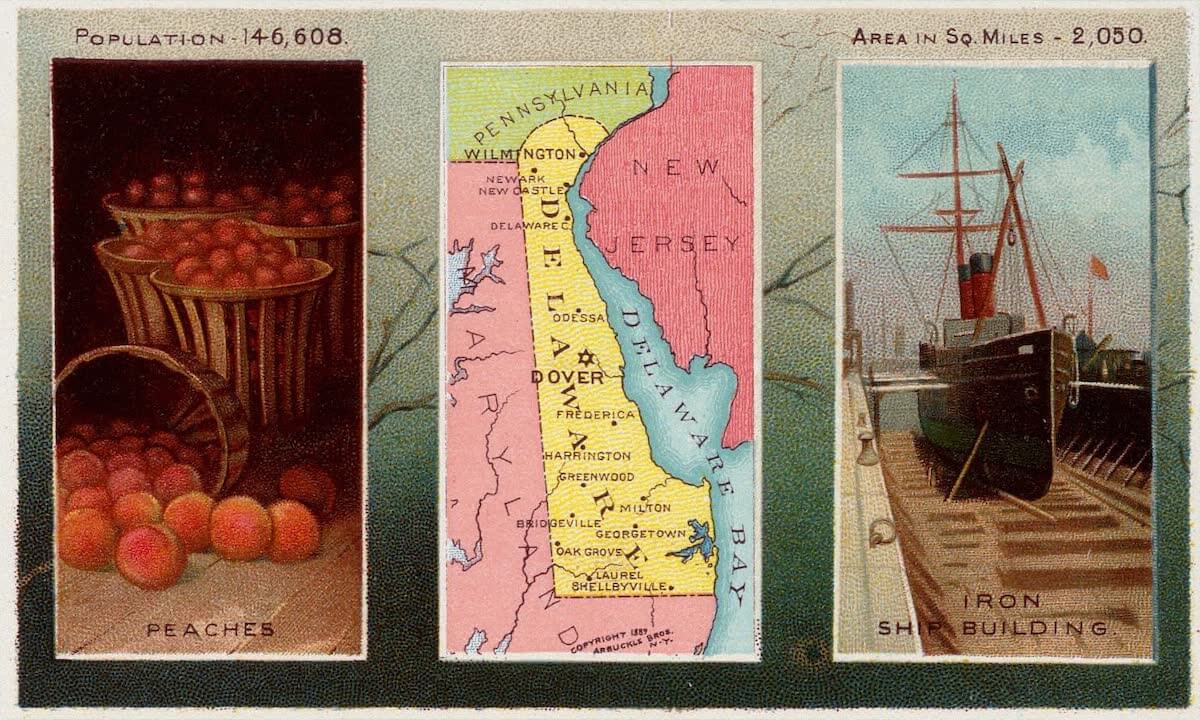 Delaware, State of. This is the smallest state of the Union, except Rhode Island, being 93 miles long and from 9 to 38 broad, and covers 1,960 square miles. It lies between Delaware Bay and Maryland. The first white settlers of Delaware were 32 Hollanders, who were all massacred by the Indians. In 1638 Peter Minuit was sent out by Queen Christina of Sweden, and built Fort Christina on the site of Wilmington, garrisoned with Swedes and Finns.

The Dutch afterward won the province from the Swedes, and in turn were ousted by the English. The duke of York, who was proprietor both of Delaware and of New Amsterdam, granted Delaware to William Penn in 1682; but it never was considered a part of Pennsylvania. The colony took an earnest part in the Revolutionary War and suffered for its patriotism, for Lewes was bombarded and Newark and Wilmington captured by the British. Delaware was the first state to ratify the constitution. Though a slave-holding state, it did not secede during the Civil War. Delawareans are called The Blue Hen's Chickens, a nickname given their soldiers in the Revolutionary War, because of the saying of one of their officers that no cock was game unless it came from a blue hen.

Surface. The most elevated ground in the state is behind Wilmington, and it forms the divide between Brandywine and Christiana Creeks. A fine rolling country is found in the extreme north where the Pennsylvania upland enters. A ridge which runs northwest and southeast through the state forms the watershed of Delaware and Chesapeake Bays, but follows the Atlantic coast-line. The rivers are small, but some are navigable.

Fisheries. The well-known Cypress-swamp, 50,000 acres in extent, is filled with game, and its salty inlets abound in the finest fish and oysters.

Climate. Delaware has a range of temperature between the severe extremes of New England and the heat of the south.

Agriculture. Products in the northern section consist of cereals, hay, wheat, corn, oats and sorghum; while the central and southern portion of the state is noted for its dairy-products as well as for its berries, grapes, melons, tomatoes—raised and canned—and especially its peaches. Some 10,000 carloads of peaches are shipped out yearly, besides the quantities sent by water or used in canneries and evaporating works.

Manufactures. The clays and kaolins of Wilmington are made into brick, terracotta and crockery. The shipyards, car-shops, powder-mills and bridge-works of Wilmington add largely to the other industries of the state. Chief among these are the manufacture of pumping and mining-apparatus, paper-making machinery and leather-goods, especially morocco.

Education. Delaware has good, public schools, furnishes free text-books and maintains separate schools for its colored population and a state agricultural college for them at Dover. There are 14 academies, seminaries and high-schools; Delaware College at Newark (co-educational) has scientific and normal departments.

Government. The governor serves for four years, and has larger power in appointing to office than most governors, but has no veto-power. The state is practically out of debt. The townships are called hundreds, after an English custom older than King Alfred's time. Every county-jail still has its pillory and whipping-post. One sixteenth of the people are foreigners, and one sixth are colored. There are but three counties, and in view of the many marshes Randolph of Roanoke once said that the Delaware senators represented three counties at low tide and one county at high tide. The state is well-served with railroads. The Chesapeake and Delaware Canal, which joins the two bays at their necks, was finished in 1829. The capital is Dover, and the only large city is Wilmington (population, 87,411). The population of the state is 202,322, making it the smallest state in population except Wyoming and Nevada.

There are no works available for the Delaware collection.