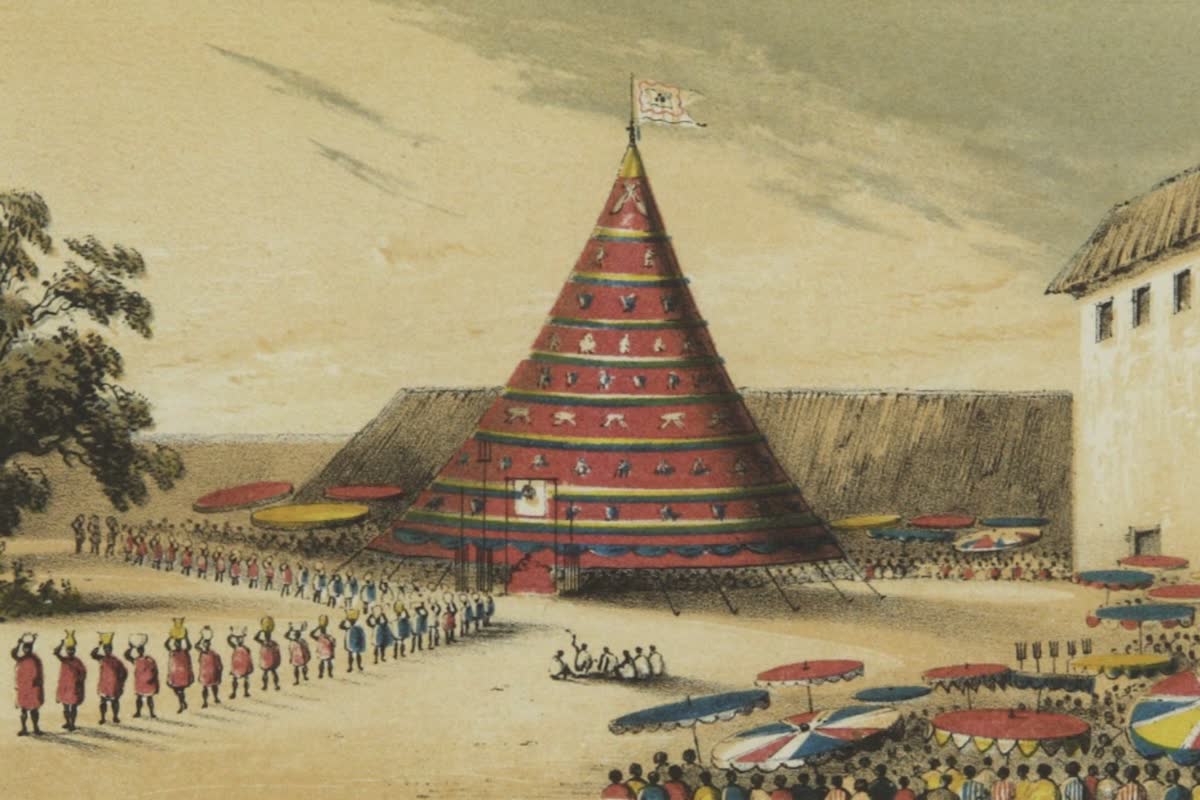 Dahomey (dä-h??m?), a French dependency since 1894 in western Africa on the upper Guinea coast, formerly a negro kingdom. It lies between the German colony of Togoland and the British territory of Lagos, and extends inland for about 130 miles. On the north it is bounded by the French military territory of the Niger. It is known to possess an area of 65,000 square miles, with 70 miles of seaboard.

It is almost surrounded by hostile tribes, and the boundaries used to change with the king's changing fortunes in war. The main port is Whydah, from which a road extends to the capital, Abomey, a distance of 65 miles. Dense forests and dismal swamps cover about two thirds of this distance; then vast rolling plains rise for many miles in the direction of the Kong uplands. The Avon and Denham lagoons receive the rivers of the country, none of which, however, are important. Groves of oil-palms encircle each town, from which palm-oil is made in great quantities; while the rich soil yields all the wealth of tropical growth.

Cotton-cloth is made, and weapons and tools are forged from native iron. The people are negroes, generally of small stature but robust and active. They are sociable, equally fond of dancing and of rum, but warlike and prone to theft. Fetish-worship prevails, the main gods being the snake-god, tree-gods, sea-gods and the thunder-gods. Human sacrifices are made to the sea-god. At Whydah is a temple to the snake-god, containing over a hundred sacred snakes. Annually, in October, are revived the grand “customs,” when as many as 500 victims are sometimes sacrificed.

The king, before his defeat by the French, was the most absolute of despots. Of his army of 10,000 soldiers, the best part consisted of Amazons, mighty and blood-thirsty women. Monster slave-hunts formerly occurred, but the slave-trade is now ruined. The Dahoman kingdom dated from the beginning of the 18th century, and reached the height of its power under Gezo, who reigned from 1818 to 1858. The seat of government is Porto Novo (19,000 inhabitants). Abomey, the old capital, about eight miles in circumference, has 15,000 people, and Whydah about 12,000.

The population is estimated at 1,000,000. The imports amounted to $7,139,655 in 1910, and the exports to $3,576,470. Cottons, machinery, drink and tobacco were the principal imports; palm-nuts and palm-oil the leading exports. Income and outgo balanced in 1910 at 3,235,000 francs. An iron pier marks the port of Kotonu, about 125 miles of railway on the projected line to Chaoru being completed from that point, with a branch 20 miles long to Segborué and Whydah. Ultimately the line will reach the Niger. Another railroad is building along the Lagos frontier. Kotonu is connected with Abomey, the Niger and the Senegal by telegraph, 1,725 miles altogether, with 120 miles of telephone lines.

There are no works available for the Dahomey collection.