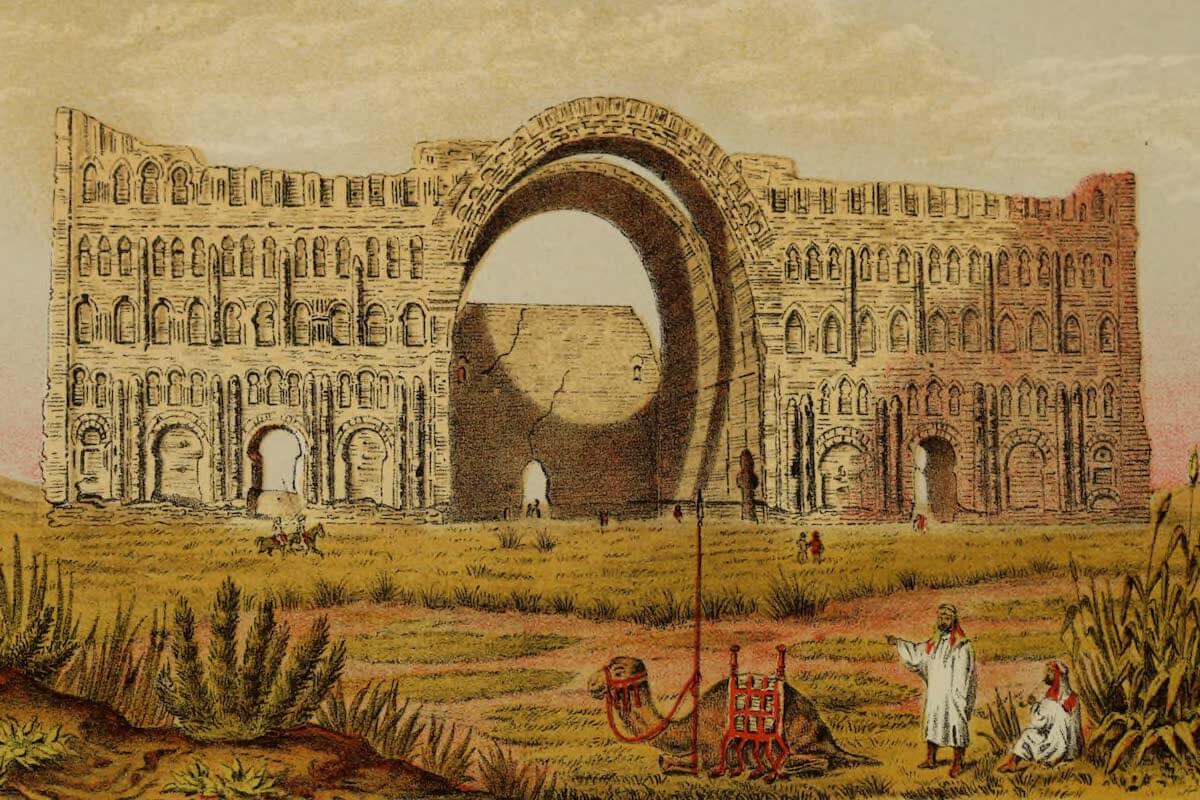 Ctesiphon was a large village on the left bank of the Tigris, opposite to Seleucia, of which it formed a suburb, about 25 m. below Bagdad. It is first mentioned in the year 220 by Polybius v. 45. 4. When the Parthian Arsacids had conquered the lands east of the Euphrates in 129 B.C., they established their winter residence in Ctesiphon.

They dared not stay in Seleucia, as this city, the most populous town of western Asia, always maintained her Greek self-government and a strong feeling of independence, which made her incline to the west whenever a Roman army attacked the Parthians. The Arsacids also were afraid of destroying the wealth and commerce of Seleucia, if they entered it with their large retinue of barbarian officials and soldiers (Strabo xvi. 743, Plin. vi. 122, cf. Joseph. Ant. xviii. 9, 2).

From this time Ctesiphon increased in size, and many splendid buildings rose; it had the outward appearance of a large town, although it was by its constitution only a village. From A.D. 36-43 Seleucia was in rebellion against the Parthians till at last it was forced by King Vardanes to yield. It is very probable that Vardanes now tried to put Ctesiphon in its place; therefore he is called founder of Ctesiphon by Ammianus Marcellinus (xxiii. 6. 23), where King Pacorus (78-110) is said to have increased its inhabitants and built its walls.

Seleucia was destroyed by the Romans in A.D. 164. When Ardashir I. founded the Sassanian empire (226), and fixed his residence at Ctesiphon, he built up Seleucia again under the name of Veh-Ardashir. Later kings added other suburbs; Chosroes I. in 540 established the inhabitants of Antiochia in Syria, whom he had led into captivity, in a new city, "Chosrau-Antioch" (or "the Roman city") near his residence. Therefore the Arabs designate the whole complex of towns which lay together around Seleucia and Ctesiphon and formed the residence of the Sassanids by the name Madāin, "the cities,"—their number is often given as seven.

In the wars between the Roman and Persian empires, Ctesiphon was more than once besieged and plundered, thus by Odaenathus in 261, and by Carus in 283; Julian in 363 advanced to Ctesiphon, but was not able to take it (Ammianus xxiv. 7). After the battle of Kadisiya (Qādisīya) Ctesiphon and the neighbouring towns were taken and plundered by the Arabs in 637, who brought home an immense amount of booty (see Caliphate). From then, these towns decayed before the increasing prosperity of the new Arab capitals Basra and Bagdad.

The site is marked only by the ruins of one gigantic building of brick-work, called Takhti Khesra, "throne of Khosrau" (i.e. Chosroes). It is a great vaulted hall ornamented with pilasters, the remainder of the palace and the most splendid example of Sassanian architecture (see Architecture, vol. ii. p. 558, for further details and illustration).

There are no works available for the Ctesiphon collection.