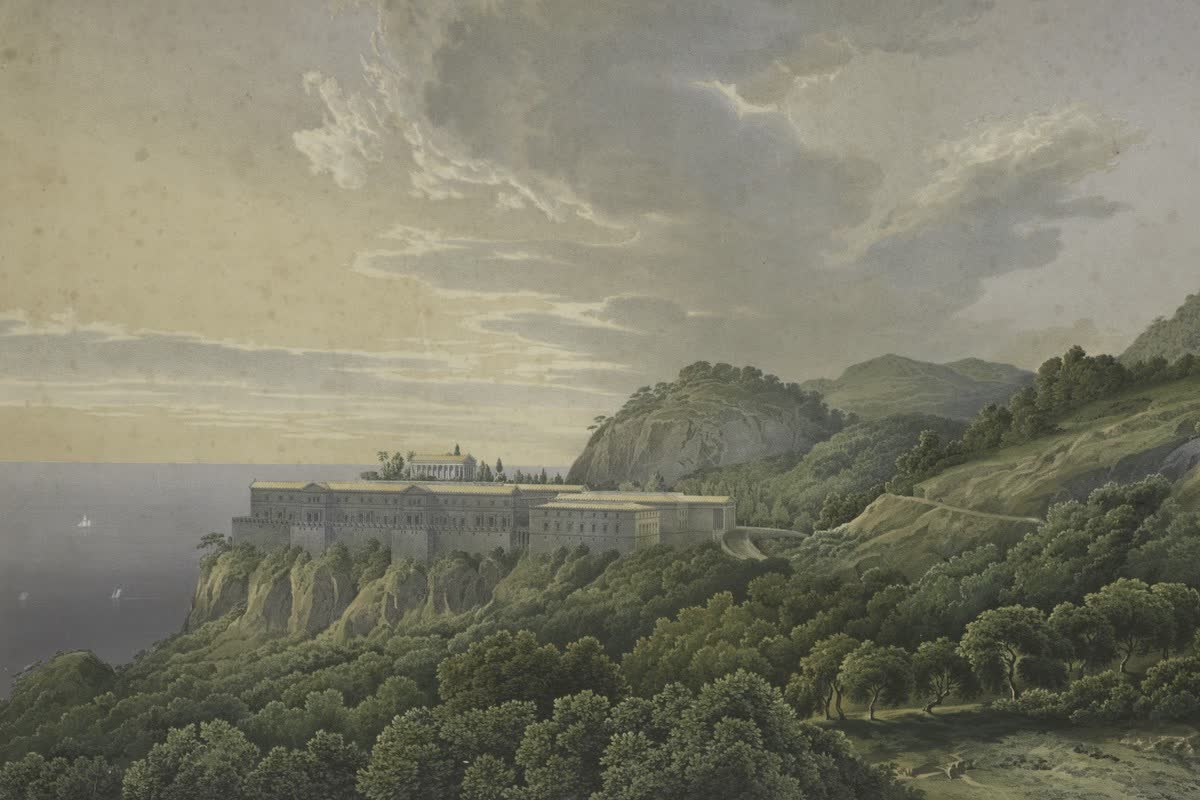 Crimea (ancient Tauris or Tauric Chersonese, called by the Russians by the Tatar name Krym or Crim), a peninsula on the north side of the Black Sea, forming part of the Russian government of Taurida, with the mainland of which it is connected by the Isthmus of Perekop (3-4 m. across). It is rudely rhomboid in shape, the angles being directed towards the cardinal points, and measures 200 m. between 44° 23' and 46° 10' N., and 110 m. between 32° 30' and 36° 40' E. Its area is 9700 sq. m.

The earliest inhabitants of whom we have any authentic traces were the Celtic Cimmerians, who were expelled by the Scythians during the 7th century B.C. A remnant, who took refuge in the mountains, became known subsequently as the Tauri. In that same century Greek colonists began to settle on the coasts, e.g. Dorians from Heraclea at Chersonesus, and Ionians from Miletus at Theodosia and Panticapaeum (also called Bosporus). Two centuries later (438 B.C.) the archon or ruler of the last-named assumed the title of king of Bosporus, a state which maintained close relations with Athens, supplying that city with wheat and other commodities. The last of these kings, Paerisades V., being hard pressed by the Scythians, put himself under the protection of Mithradates VI., king of Pontus, in 114 B.C.

After the death of this latter sovereign his son Pharnaces, as a reward for assistance rendered to the Romans in their war against his father, was (63 B.C.) invested by Pompey with the kingdom of Bosporus. In 15 B.C. it was once more restored to the king of Pontus, but henceforward ranked as a tributary state of Rome. During the succeeding centuries the Crimea was overrun or occupied successively by the Goths (A.D. 250), the Huns (376), the Khazars (8th century), the Byzantine Greeks (1016), the Kipchaks (1050), and the Mongols (1237).

In the 13th century the Genoese destroyed or seized the settlements which their rivals the Venetians had made on the Crimean coasts, and established themselves at Eupatoria, Cembalo (Balaklava), Soldaia (Sudak), and Kaffa (Theodosia), flourishing trading towns, which existed down to the conquest of the peninsula by the Ottoman Turks in 1475. Meanwhile the Tatars had got a firm footing in the northern and central parts of the peninsula as early as the 13th century, and after the destruction of the Golden Horde by Tamerlane they founded an independent khanate under a descendant of Jenghiz Khan, who is known as Hadji Ghirai.

He and his successors reigned first at Solkhat (Eski-krym), and from the beginning of the 15th century at Bakhchi-sarai. But from 1478 they ruled as tributary princes of the Ottoman empire down to 1777, when having been defeated by Suvarov they became dependent upon Russia, and finally in 1783 the whole of the Crimea was annexed to the Russian empire. Since that date the only important phase of its history has been the Crimean War of 1854-56, which is treated of under a separate article. At various times, e.g. after the acquisition by Russia, after the Crimean War of 1854-56, and in the first years of the 20th century, the Tatars emigrated in large numbers to the Ottoman empire.

Its coasts are washed by the Black Sea, except on the north-east, where is the Sivash or Putrid Sea, a shallow lagoon separated from the Sea of Azov by the Arabat spit of sand. The shores are broken by several bays and harbours—on the west side of the Isthmus of Perekop by the Bay of Karkinit; on the south-west by the open Bay of Kalamita, on the shores of which the allies landed in 1854, with the ports of Eupatoria, Sevastopol and Balaklava; by the Bay of Arabat on the north side of the Isthmus of Yenikale or Kerch; and by the Bay of Kaffa or Feodosiya (Theodosia), with the port of that name, on the south side of the same. The south-east coast is flanked at a distance of 5 to 8 m. from the sea by a parallel range of mountains, the Yaila-dagh, or Alpine Meadow mountains, and these are backed, inland, by secondary parallel ranges; but 75% of the remaining area consists of high arid prairie lands, a southward continuation of the Pontic steppes, which slope gently north-westwards from the foot of the Yaila-dagh.

The main range of these mountains shoots up with extraordinary abruptness from the deep floor of the Black Sea to an altitude of 2000 to 2500 ft., beginning at the south-west extremity of the peninsula, Cape Fiolente (anc. Parthenium), supposed to have been crowned by the temple of Artemis in which Iphigeneia officiated as priestess. On the higher parts of this range are numerous flat mountain pastures (Turk, yailas), which, except for their scantier vegetation, are analogous to the almen of the Swiss Alps, and are crossed by various passes (bogaz), of which only six are available as carriage roads. The most conspicuous summits in this range are the Demir-kapu or Kemal-egherek (5040 ft.), Roman-kosh (5060 ft.), Chatyr-dagh (5000 ft.), and Karabi-yaila (3975 ft.). The second parallel range, which reaches altitudes of 1500 to 1900 ft., likewise presents steep crags to the south-east and a gentle slope towards the north-west. In the former slope are thousands of small caverns, probably inhabited in prehistoric times; and several rivers pierce the range in picturesque gorges. A valley, 10 to 12 m. wide, separates this range from the main range, while another valley 2 to 3 m. across separates it from the third parallel range, which reaches altitudes of only 500 to 850 ft. Evidences of a fourth and still lower ridge can be traced towards the south-west.

A number of short streams, none of them anywhere navigable, leap down the flanks of the mountains by cascades in spring, e.g. the Chernaya, Belbek, Kacha and Alma, to the Black Sea, and the Salghir, with its affluent, the Kara-su, to the Sivash lagoon.

In point of climate and vegetation there exist marked differences between the open steppes and the south-eastern littoral, with the slopes of the Yaila-dagh behind it. The former, although grasses and Liliaceae grow on them in great variety and luxuriance in the early spring, become completely parched up by July and August, while the air is then filled with clouds of dust. There also high winds prevail, and snowstorms, hailstorms and frost are of common occurrence. Nevertheless this region produces wheat and barley, rye and oats, and supports numbers of cattle, sheep and horses. Parts of the steppes are, however, impregnated with salt, or studded with saline lakes; there nothing grows except the usual species of Artemisia and Salsola. As a rule water can only be obtained from wells sunk 200 to 300 ft. deep, and artesian wells are now being bored in considerable numbers. All over the steppes are scattered numerous kurgans or burial-mounds of the ancient Scythians. The picture which lies behind the sheltering screen of the Yaila-dagh is of an altogether different character. Here the narrow strip of coast and the slopes of the mountains are smothered with greenery.

This Russian Riviera stretches all along the south-east coast from Cape Sarych (extreme S.) to Feodosiya (Theodosia), and is studded with summer sea-bathing resorts—Alupka, Yalta, Gursuv, Alushta, Sudak, Theodosia. Numerous Tatar villages, mosques, monasteries, palaces of the Russian imperial family and Russian nobles, and picturesque ruins of ancient Greek and medieval fortresses and other buildings cling to the acclivities and nestle amongst the underwoods of hazel and other nuts, the groves of bays, cypresses, mulberries, figs, olives and pomegranates, amongst the vineyards, the tobacco plantations, and gardens gay with all sorts of flowers; while the higher slopes of the mountains are thickly clothed with forests of oak, beech, elm, pines, firs and other Coniferae. Here have become acclimatized, and grow in the open air, such plants as magnolias, oleanders, tulip trees, bignonias, myrtles, camellias, mimosas and many tender fruit-trees. Vineyards cover over 19,000 acres, and the wine they yield (3½ million gallons annually) enjoys a high reputation.

Fruits of all kinds are produced in abundance. In some winters the tops of the mountains are covered with snow, but snow seldom falls to the south of them, and ice, too, is rarely seen in the same districts. The heat of summer is moderated by breezes off the sea, and the nights are cool and serene; the winters are mild and healthy. Fever and ague prevail in the lower-lying districts for a few weeks in autumn. Dense fogs occur sometimes in March, April and May, but seldom penetrate inland. The difference of climate between the different parts of the Crimea is illustrated by the following data: annual mean, at Melitopol, on the steppe N. of Perekop, 48° Fahr.; at Simferopol, just within the mountains, 50°; at Yalta, on the south-east coast, 56.5°; the respective January means being 20°, 31° and 39.5°, and the July means 74°, 70° and 75.5°. The rainfall is small all over the peninsula, the annual average on the steppes being 13.8 in., at Simferopol 17.5, and at Yalta 18 in. It varies greatly, however, from year to year; thus at Simferopol it ranges between the extremes of 7.5 and 26.4 in.

Other products of the Crimea, besides those already mentioned, are salt, porphyry and limestone, and ironstone has recently been brought to light at Kerch. Fish abound all round the coast, such as red and grey mullet, herring, mackerel, turbot, soles, plaice, whiting, bream, haddock, pilchard, a species of pike, whitebait, eels, salmon and sturgeon. Manufacturing industries are represented by shipbuilding, flour-mills, ironworks, jam and pickle factories, soap-works and tanneries. The Tatars excel in a great variety of domestic industries, especially in the working of leather, wool and metal. A railway, coming from Kharkov, crosses the peninsula from north to south, terminating at Sevastopol and sending off branch lines to Theodosia and Kerch.

The bulk of the population consist of Tatars, who, however, are racially modified by intermarriage with Greeks and other ethnic elements. The remainder of the population is made up of Russians, Germans, Karaite Jews, Greeks and a few Albanians. The total in 1897 was 853,900, of whom only 150,000 lived in the towns. Simferopol is the chief town; others of note, in addition to those already named, are Eupatoria and Bakhchisarai, the old Tatar capital.