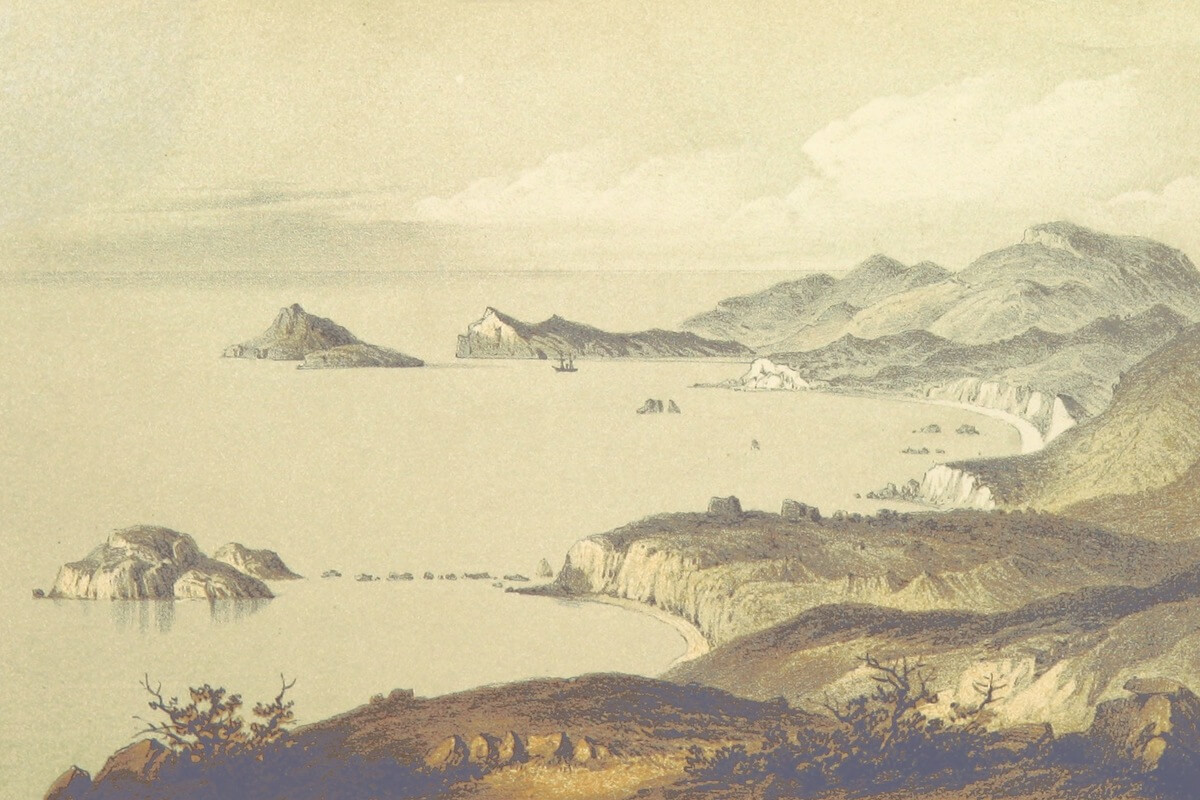 CRETE (Gr. ?????; Turk. Kirid, Ital. Candia), after Sicily, Sardinia and Cyprus the largest island in the Mediterranean, situated between 34° 50? and 35° 40? N. lat. and between 23° 30? and 26° 20? E. long. Its north-eastern extremity, Cape Sidero, is distant about 110 m. from Cape Krio in Asia Minor, the interval being partly filled by the islands of Carpathos and Rhodes; its north-western, Cape Grabusa, is within 60 m. of Cape Malea in the Morea. Crete thus forms the natural limit between the Mediterranean and the Archipelago.

Medieval to 19th Century.—Though it was continually torn by civil dissensions, the island maintained its independence of the various Macedonian monarchs by whom it was surrounded; but having incurred the enmity of Rome, first by an alliance with the great Mithradates, and afterwards by taking active part with their neighbours, the pirates of Cilicia, the Cretans were at length attacked by the Roman arms, and, after a resistance protracted for more than three years, were finally subdued by Q. Metellus, who earned by this success the surname of Creticus (67 B.C.).

The island was now reduced to a Roman province, and subsequently united for administrative purposes with the district of Cyrenaica or the Pentapolis, on the opposite coast of Africa. This arrangement lasted till the time of Constantine, by whom Crete was incorporated in the prefecture of Illyria. It continued to form part of the Byzantine empire till the 9th century, when it fell into the hands of the Saracens (823). It then became a formidable nest of pirates and a great slave mart; it defied all the efforts of the Byzantine sovereigns to recover it till the year 960, when it was reconquered by Nicephorus Phocas. In the partition of the Greek empire after the capture of Constantinople by the Latins in 1204, Crete fell to the lot of Boniface, marquis of Montferrat, but was sold by him to the Venetians, and thus passed under the dominion of that great republic, to which it continued subject for more than four centuries.

Under the Venetian government Candia, a fortress originally built by the Saracens, and called by them “Khandax,” became the seat of government, and not only rose to be the capital and chief city of the island, but actually gave name to it, so that it was called in the official language of Venice “the island of Candia,” a designation which from thence passed into modern maps. The ancient name of Krete or Kriti was, however, always retained in use among the Greeks, and is gradually resuming its place in the usage of literary Europe. The government of Crete by the Venetian aristocracy was, like that of their other dependencies, very arbitrary and oppressive, and numerous insurrections were the consequence. Daru, in his history of Venice, mentions fourteen between the years 1207 and 1365, the most important being that of 1361-1364,—a revolt not of the natives against the rule of their Venetian masters, but of the Venetian colonists against the republic. But with all its defects their administration did much to promote the material prosperity of the country, and to encourage commerce and industry; and it is probable that the island was more prosperous than at any subsequent time.

Their Venetian masters at least secured to the islanders external tranquillity, and it is singular that the Turks were content to leave them in undisturbed possession of this opulent and important island for nearly two centuries after the fall of Constantinople. The Cretans themselves, however, were eager for a change, and, disappointed in the hope of a Genoese occupation, were ready, as is stated in the report of a Venetian commissioner, to exchange the rule of the Venetians for that of the Turks, whom they fondly expected to find more lenient, or at any rate less energetic, masters. It was not till 1645 that the Turks made any serious attempt to effect the conquest of the island; but in that year they landed with an army of 50,000 men, and speedily reduced the important city of Canea. Retimo fell the following year, and in 1648 they laid siege to the capital city of Candia. This was the longest siege on record, having been protracted for more than twenty years; but in 1667 it was pressed with renewed vigour by the Turks under the grand vizier Ahmed Kuprili, and the city was at length compelled to surrender (September 1669). Its fall was followed by the submission of the whole island. Venice was allowed to retain possession of Grabusa, Suda and Spinalonga on the north, but in 1718 these three strongholds reverted to the Turks, and the island was finally lost to Venice.

From this time Crete continued subject to Ottoman rule without interruption till the outbreak of the Greek revolution. After the conquest a large part of the inhabitants embraced Mahommedanism, and thus secured to themselves the chief share in the administration of the island. But far from this having a favourable effect upon the condition of the population, the result was just the contrary, and according to R. Pashley (Travels in Crete, 1837) Crete was the worst governed province of the Turkish empire. In 1770 an abortive attempt at revolt, the hero of which was “Master” John, a Sphakiot chief, was repressed with great cruelty. The regular authorities sent from Constantinople were wholly unable to control the excesses of the janissaries, who exercised without restraint every kind of violence and oppression. In 1813 the ruthless severity of the governor-general, Haji Osman, who obtained the co-operation of the Christians, broke the power of the janissaries; but after Osman had fallen a victim to the suspicions of the sultan, Crete again came under their control.

When in 1821 the revolution broke out in continental Greece, the Cretans, headed by the Sphakiots, after a massacre at Canea at once raised the standard of insurrection. They carried on hostilities with such success that they soon made themselves masters of the whole of the open country, and drove the Turks and Mussulman population to take refuge in the fortified cities. The sultan then invoked the assistance of Mehemet Ali, pasha of Egypt, who despatched 7000 Albanians to the island. Hostilities continued with no decisive result till 1824, when the arrival of further reinforcements enabled the Turkish commander to reduce the island to submission. In 1827 the battle of Navarino took place, and in 1830 (3rd of February) Greece was declared independent.

The allied powers (France, England and Russia) decided, however, that Crete should not be included amongst the islands annexed to the newly-formed kingdom of Greece; but recognizing that some change was necessary, they obtained from the sultan Mahmud II. its cession to Egypt, which was confirmed by a firman of the 20th of December 1832. This change of masters brought some relief to the unfortunate Cretans, who at least exchanged the licence of local misrule for the oppression of an organized despotism; and the government of Mustafa Pasha, an Albanian like Mehemet Ali, the ruler of the island for a considerable period (1832-1852), was more enlightened and intelligent than that of most Turkish governors. He encouraged agriculture, improved the roads, introduced an Albanian police, and put down brigandage. The period of his administration has been called the “golden age” of Crete.

In 1840 Crete was again taken from Mehemet Ali, and replaced under the dominion of the Turks, but fortunately Mustafa still retained his governorship until he left for Constantinople to become grand vizier in 1852. Four years later an insurrection broke out, owing to the violation of the provisions of an imperial decree (February 1856), whereby liberty of conscience and equal rights and privileges with Mussulmans had been conferred upon Christians. The latter refused to lay down their arms until a firman was issued (July 1858), confirming the promised concessions.

These promises being again repudiated, in 1864 the inhabitants held an assembly and a petition was drawn up for presentation at Constantinople by the governor. The sultan’s reply was couched in the vaguest terms, and the Cretans were ordered to render unquestioning obedience to the authorities. After a period of great distress and cruel oppression, in 1866, on the demand for reforms being again refused, a general insurrection took place, which was only put down by great exertions on the part of the Porte. It was followed by the concession of additional privileges to the Christians of the island and of a kind of constitutional government and other reforms embodied in what is known as the “Organic Statute” of 1868.

Geography. The island is of elongated form; its length from E. to W. is 160 m., its breadth from N. to S. varies from 35 to 7½ m., its area is 3330 sq. m. The northern coast-line is much indented. On the W. two narrow mountainous promontories, the western terminating in Cape Grabusa or Busa (ancient Corycus), the eastern in Cape Spada, shut in the Bay of Kisamos; beyond the Bay of Canea, to the E., the rocky peninsula of Akrotiri shelters the magnificent natural harbour of Suda (8½ sq. m.), the only completely protected anchorage for large vessels which the island affords. Farther E. are the bays of Candia and Malea, the deep Mirabello Bay and the Bay of Sitia.

The south coast is less broken, and possesses no natural harbours, the mountains in many parts rising almost like a wall from the sea; in the centre is Cape Lithinos, the southernmost point of the island, partly sheltering the Bay of Messará on the W. Immediately to the E. of Cape Lithinos is the small bay of Kali Liménes or Fair Havens, where the ship conveying St Paul took refuge (Acts xxvii. 8). Of the islands in the neighbourhood of the Cretan coast the largest is Gavdo (ancient Clauda, Acts xxvii. 16), about 25 m. from the south coast at Sphakia, in the middle ages the see of a bishop. On the N. side the small island of Dia, or Standia, about 8 m. from Candia, offers a convenient shelter against northerly gales. Three small islands on the northern coast—Grabusa at the N.W. extremity, Suda, at the entrance to Suda harbour, and Spinalonga, in Mirabello Bay—remained for some time in the possession of Venice after the conquest of Crete by the Turks. Grabusa, long regarded as an impregnable fortress, was surrendered in 1692, Suda (where the flags of Turkey and the four protecting powers are now hoisted) and Spinalonga in 1715.

Towns.—The three principal towns are on the northern coast and possess small harbours suitable for vessels of light draught. Candia, the former capital and the see of the archbishop of Crete (pop. in 1900, 22,501), is officially styled Herákleion; it is surrounded by remarkable Venetian fortifications and possesses a museum with a valuable collection of objects found at Cnossus, Phaestus, the Idaean cave and elsewhere. It has been occupied since 1897 by British troops. Canea (Xaviá), the seat of government since 1840 (pop. 20,972), is built in the Italian style; its walls and interesting galley-slips recall the Venetian period. The residence of the high commissioner and the consulates of the powers are in the suburb of Halepa. Retimo (????????) is, like Canea, the see of a bishop (pop. 9311). The other towns, Hierapetra, Sitia, Kisamos, Selino and Sphakia, are unimportant.