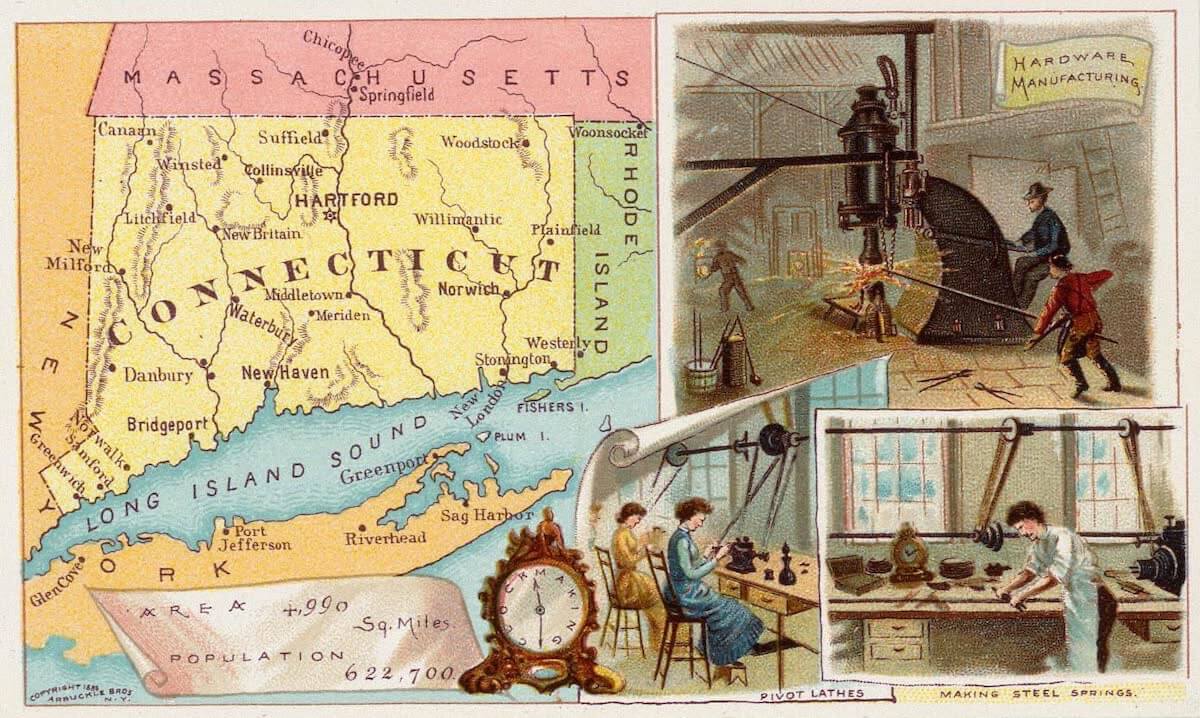 Connecticut (k?n-n?t??-k?t) (name derived from Indian word meaning land on the long tidal river) occupies the southwestern corner of the New England states. Its northern boundary is Massachusetts, 88 miles, its eastern, Rhode Island, 45 miles, western, New York, 72 miles. On the south 100 miles of irregular coast afford numerous good harbors, the best of which are New Haven and New London. The area of the state is 5,004 square miles. The census of 1900 gave a population of 908,420. A school census in 1907 showed a population of 1,037,614, and the census of 1910 gave a population of 1,114,756.

The first permanent settlements were made at Saybrook (1635), Hartford (1636) and New Haven (1637). Prominent men of this period were the Rev. Thomas Hooker and the Rev. Samuel Stone, who led about 100 men, women and children from Massachusetts to Hartford; John Winthrop, jr, afterward governor, who was commissioned by Lords Say and Brook to establish a fort at the mouth of the Connecticut, named Saybrook for its owners; and the Rev. John Davenport and Theophilus Eaton who founded the New Haven colony. The Indians of the Pequot, Narragansett and various smaller tribes were practically exterminated by the settlers in 1637.

Connecticut is known as the Constitution State from the fact that almost the first constitution adopted by vote of the people was drawn up and adopted by the Connecticut colony in 1639. In 1662 Gov. John Winthrop, jr, obtained a charter from King Charles II granting to the colony an unusual degree of independence. The hiding of the charter in an oak must be relegated to legend. It was, however, not surrendered at the demand of Sir Edmund Andros, royal governor of New England, but was withheld until 1689, when it was produced and the colonial government reestablished.

The charter provided the accepted form of government until the adoption of the present constitution in 1818. Its terms and forms have been largely preserved in the constitution, and still are the organic law of the state. A convention held in 1902 to consider the revision of the constitution accomplished nothing. Representation under this constitution is institutional, the towns in existence in 1818 having two representatives each, the towns incorporated later having one or more representatives as the population is below or above 5,000. The system has proved efficient and has worked no injustice.

The state furnished 40,000 soldiers during the War of the Revolution. Jonathan Trumbull, then governor, was a valued friend and adviser of Washington. William A. Buckingham, governor at the outbreak of the Civil War, made the record of the state in that war remarkable for promptness and zeal. Nearly 55,000 volunteers went from Connecticut. Immigration has changed the character of the population. In 1913 about 30,000 foreigners came into the state.

Geography. The rivers are the Connecticut, navigable to Hartford, the Housatonic and the Thames, navigable through the tidewater. The various tributaries are the Parmington, the Naugatuck, the Shepaug, the Willimantic, the Quinnebaug and the Shetucket. Ranges of hills cross from north to south, dividing the state into the eastern upland, the central lowland, the western upland and, south of these, the coast section. The rounded and fertile hills of the eastern upland have a lower average elevation than those of the western section, which in the extreme northwestern corner reach the height of 2,355 feet. The hills of the western upland are rugged and steep, broken by bold bluffs of trap-rock. Nearness to the ocean renders the climate less severe than that of inland states of the same latitude. The weather is changeable. The mean annual temperature is 50°.

The geological formation of the state is interesting. Ridges of trap-rock are numerous through the central portion. These ridges, forced up through red sandstone, slope abruptly to the west and gently to the east. Copper and lead, both combined with silver, are found in Hartford County. Copper was formerly mined, the first copper cents used in America being made from Connecticut copper. Later the mines proved unprofitable and were abandoned. In the western part of the state a rich deposit of iron has been mined since 1730. Limestone, marble, brownstone (freestone), granite and slate are quarried. The timber includes hickory, oak, chestnut, butternut, beech, birch, maple, ash, elm. Much valuable forest-land remains, in spite of the large tracts which have been cleared. Scientific protection and increase of forests are encouraged by a state-forester and the Yale school of forestry.

Four causes combine to make Connecticut prominent as a manufacturing state: the favorable location geographically, ease of transportation by land and water, excellent water-power and the inventive genius of the people. Among the manufactured products are small hardware of all sorts, machinery, india-rubber goods, paper, silver-plated ware, hats, clocks and watches, thread, musical instruments, typewriters, sewing-machines, firearms and ammunition carriages, bicycles and motor-vehicles, cotton and woolen-fabrics and silk-fabrics. One large shipyard and two smaller ones do a considerable amount of shipbuilding. The New York, New Haven and Hartford Railroad, with its branches and trolley-lines, covers the state. Steamers run from New York to New Haven, New London, Bridgeport and Hartford.

Agriculture is second in importance among the industries. Of the crops raised, hay is the most valuable and has the largest acreage. The soil of the upper valley of the Connecticut is a deep, rich loam, especially suited to tobacco-raising. Much tobacco is raised here and in the Housatonic valley. The highlands are devoted largely to dairy-farming, the west and southwest to market-gardening. Orchard-fruits are an important crop. Fishing for bluefish is followed along the shore, where there are also valuable shell-fisheries. The Connecticut yields a fair catch of shad.

Education. Supervision of the public-school system is in the hands of a board appointed by the legislature. Financial assistance of the towns is provided by a fund derived from the sale of Connecticut's share of land in the Western Reserve and by high-school grants, larger and more generally applicable than in any other state. The minimum school-year covers 36 weeks, the longest required by any state. Enforcement of child-labor laws is under the charge of the state board of education, and attendance laws are rigidly observed. Higher institutions of learning include Yale University, New Haven; Wesleyan University, Middletown; Trinity College, Hartford; Hartford Theological Seminary, Hartford; and Berkeley Divinity School, Middletown. The state maintains normal schools at New Britain, New Haven, Willimantic and Danbury. An agricultural college is maintained at Storrs by funds obtained in part from the U. S. government and in part from the state.