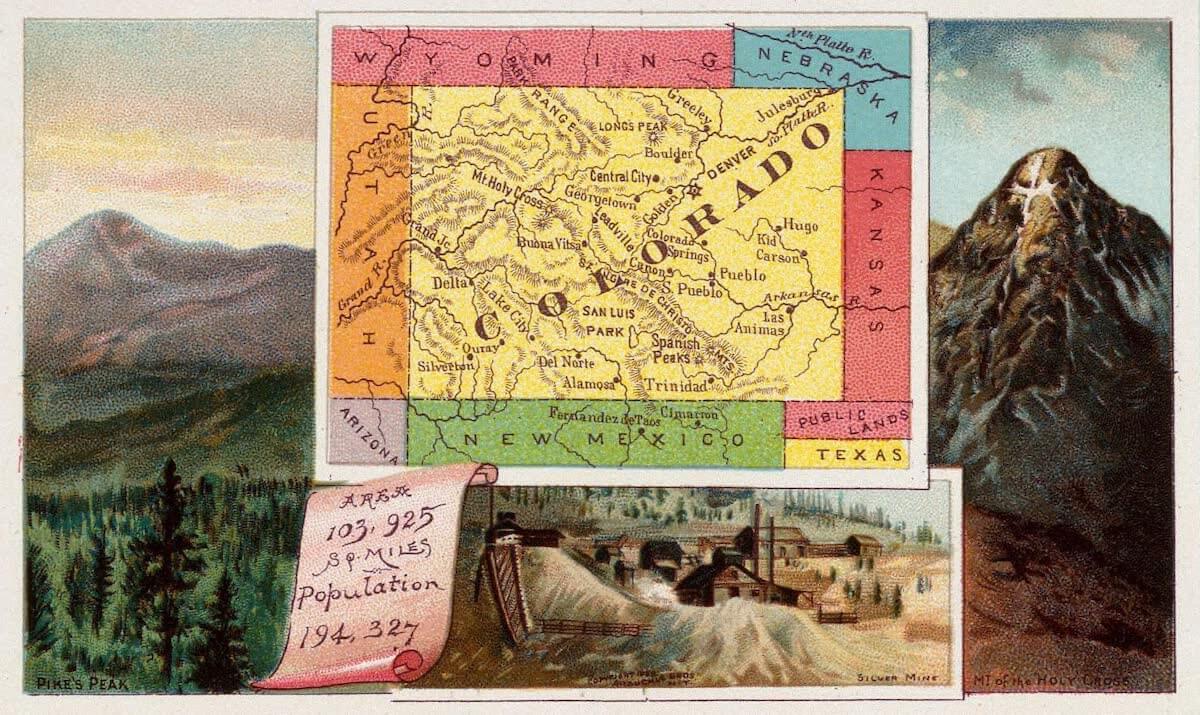 Colorado is located in the center of that portion of the United States west of the Mississippi River. The state is quadrilateral in shape; and is bounded by Wyoming and Nebraska on the north, Nebraska and Kansas on the east, Oklahoma and New Mexico on the south and Utah on the west. The surface of Colorado has two natural divisions,—mountains and plain. The mountain-division has an altitude from 5,000 feet to 14,000 feet. The plain-division is from 4,000 feet to 5,000 feet high.

Colorado was acquired in three tracts: a portion of the north and east by the Louisiana-purchase of 1803; a portion of the west and north by the Mexican cession of 1848; the remainder by a purchase from Texas in 1850. Coronado, in 1541, is supposed to have been the first white man to set foot within the present limits of Colorado. In 1776 Escalante traversed the western and southern portions. The first organized American exploration was made under government authority in 1806 by Lieutenant Zebulon N. Pike. The next expedition was undertaken in 1819 by Major Stephen S. Long. In 1842 John C. Fremont began a series of five explorations in search of practicable rail-routes.

The first important discovery of gold was made in 1858. At this time trappers and scouts were about the only white inhabitants of Colorado, and there were only a few forts, stockade and trading-posts; such a trading-post was established in 1840 on the present site of Pueblo. When the first gold-hunters came to Colorado the parks were inhabited by the Ute Indians; the plains by the Cheyennes, Arapahoes, Kiowas and Comanches. The Indians have since been placed upon reservations. In 1876 Colorado was admitted into the Union as the Centennial State. The prehistoric remains, consisting of numerous cave-dwellings and ruins found in southern Colorado, have been set apart as a governmental reservation.

Area. The state is about 370 miles long and 280 miles wide, while the gross area of the state is 103,948 square miles. Deducting a few small lakes and other bodies of water leaves 103,658 square miles of land area. Colorado is larger than Great Britain, half as large as France, and nearly equal in area to New York, Pennsylvania, New Jersey and Delaware combined.

Mountains. The continental range of the Rocky Mountains extends across the state from north to south near its center. Pike's Peak, west of Colorado Springs, is the most famous peak in the state, but not the highest, it being one of many that have an elevation of 14,000 feet to 14,500 feet.

Rivers. The principal rivers of the eastern slope are the South Platte and the Arkansas. The Rio Grande drains the San Luis valley. The Grand flows toward the southwest. The Yampa and White are tributaries of the Green, which unites with the Grand in eastern Utah and forms the Colorado River. None of these rivers is navigable. These rivers with their numerous branches furnish a supply of water for irrigation purposes.

Climate. The climate is delightful; the air is dry, the sunshine abundant. There are rains throughout the warm parts of the year and snows in winter, but both are moderate in quantity. The altitude and dryness minimize the heat in summer and the cold in winter. The perpetual-snow line varies between 13,000 and 14,000 feet, except on the side of the mountains sloping to the north and in deep canyons where it is lower.

Land. The report of 1911 of the Commissioner of the United States General Land-Office, Washington, D. C., shows that 20,599,100 acres of government land were unappropriated and unreserved, of which 19,069,624 acres had been surveyed and 1,529,476 acres had not been surveyed. Since the date of that report there have been many entries by settlers on such lands. When Colorado was admitted to the Union, Congress granted to the state two sections of land in every township for the support of the public schools. The soil on the uplands is a rich, sandy loam, varied in some localities by clay or adobe. Along the river-bottoms it is largely alluvial; in some places siliceous and micaceous.

Agriculture. The recent development of agriculture through irrigation has been the wonder of western civilization. In 1910 there were 46,170 farms, average value $10,645. The average number of acres per farm was 293, which was more than twice the size of the average farm in the United States. This is due to the number of stock-grazing-farms. Farm-products are cereals, roots, vegetables, fruit, hay-fodder, live stock, wool, dairying, poultry, honey, etc. Colorado excels other states in the average value per acre of farm-crops. Owing to the superior quality of Colorado fruit, it is very extensively shipped to other states.

Mining. Colorado leads in the production of the precious and allied metals, producing twice as much gold and silver as any other state and more than one third of the total output of the United States. Colorado possesses inexhaustible coal-deposits, and in 1906 was seventh among the coal-producing states, surpassed by Pennsylvania, Illinois, West Virginia, Ohio, Alabama and Indiana in the order named. It ranked second among the states as a producer of anthracite, being surpassed by Pennsylvania. The Colorado coal-fields are found on both sides of the Rocky Mountains, those on the western slope being the largest and most important in quantity and quality. In the year 1910 the state produced 11,973,736 tons, which were valued at $17,026,934, and employed 15,864 men in and about the mines. Coke is manufactured extensively, the state ranking sixth in the amount of coke produced.

Manufacturing. The great variety of raw materials gives Colorado advantages as a manufacturing state. The leading manufacturing industries are the iron and steel plant at Pueblo, foundries and machine-shops at Denver, smelting of gold, silver, copper, lead and other ores, canning-factories, creameries and cheese-factories, flouring and grist-mills, printing and publishing plants, saw-mills, beet-sugar factories, etc.

Railroads. Colorado has better railroad accommodations than any other Rocky Mountain state, only one county, Baca, being without railroad communication. There already are over 5,000 miles of railroad within its boundaries, and more are being constructed. The principal railroads are the Denver and Rio Grande, Colorado and Southern, Union Pacific, Burlington, Atchison, Topeka and Santa Fe, Colorado Midland, the Denver, Northwestern and Pacific and the Missouri Pacific roads.

Education. Colorado ranks among the foremost in education. There are more than 2,000 school-buildings, with 5,000 teachers and an attendance of 168,000 pupils. The annual expenditure for school purposes is five and one-half million dollars. The state institutions of higher education are the State University at Boulder, State School of Mines at Golden, State Agricultural College at Fort Collins and the State Normal School at Greeley.