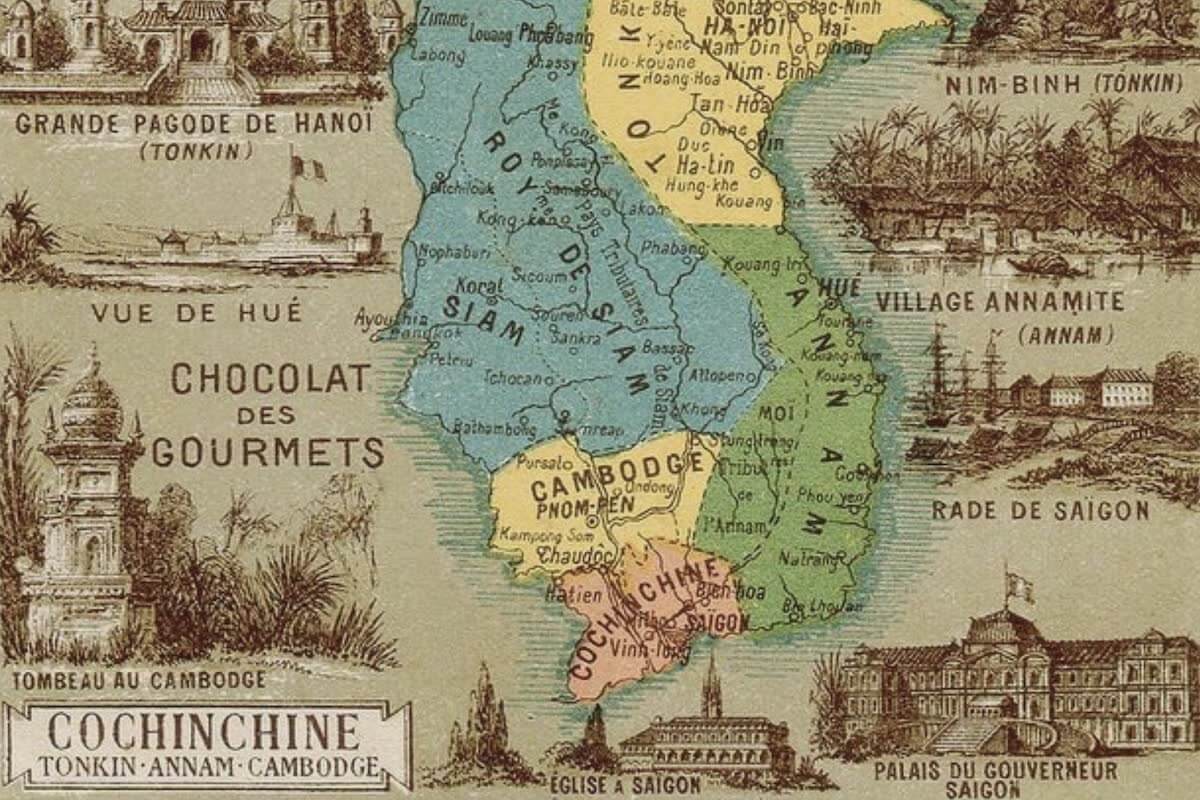 COCHIN-CHINA, a French colony in the extreme south of French Indo-China. The term formerly included the whole Annamese empire—Tongking, Annam, and Lower Cochin-China, but it now comprises only the French colony, which corresponds to Lower Cochin-China, and consists of the six southern provinces of the Annamese empire annexed by France in 1862 and 1867. Cochin-China is bounded W. by the Gulf of Siam, N.W. and N. by Cambodia, E. by Annam, and S.E. by the China Sea. Except along part of the north-west frontier, where the canal of Vinh-Thé divides it from Cambodia, its land-limits are conventional. Its area is about 22,000 sq. m.

The Khmer kingdom (see Cambodia), at its zenith from the 9th to the 12th centuries, included a large portion of the modern colony of Cochin-China, the coastal portion and perhaps the eastern region being under the dominion of the empire of Champa, which broke up during the 15th century. This eastern region was occupied in the 17th century by the Annamese, who in the 18th century absorbed the western provinces. From this period the history of Cochin-China follows that of Annam till 1867, when it was entirely occupied by the French and became a French colony. In 1887 it was united with Cambodia, Annam and Tongking to form the Indo-Chinese Union. In 1901 the population numbered 2,968,529, of whom 4932 were French (exclusive of French troops, who numbered 2537), 2,558,301 Annamese, 231,902 Cambodians, 92,075 Chinese, 42,940 savages (Min Huong), the rest being Asiatics of other nationalities, together with a few Europeans other than French.

Geography.—Cochin-China consists chiefly of an immense plain, flat and monotonous, traversed by the Mekong and extending from Ha-Tien in the west to Baria in the east, and from Bien-Hoa in the north-east to the southern point of the peninsula of Ca-Mau in the south-west. The last spurs of the mountains of Annam, which come to an end at Cape St Jacques, extend over parts of the provinces of Tay-Ninh, Bien-Hoa and Baria in the north-east and east of the colony, but nowhere exceed 2900 ft. in height; low hills are found in the north-western province of Chau-Doc.

Cochin-China is remarkable for the abundance of its waterways. The Mekong divides at Pnom-Penh in Cambodia into two arms, the Fleuve supérieur and the Fleuve inférieur, which, pursuing a course roughly parallel from north-west to south-east, empty into the China Sea by means of the numerous channels of its extensive delta. From June to October the inundations of the Mekong cover most of the country, portions of which, notably the Plaine des Joncs in the north and a large tract of the peninsula of Ca-Mau, are little else than marshes. Besides a great number of small coastal streams there are four other rivers of secondary importance, all of which water the east of the colony, viz. the Don-Nai, which rising in the Annamese mountains flows west, then abruptly south, reaching the sea to the west of Cape St Jacques; the Saigon river, which flowing from north-west to south-east passes Saigon, the capital of the colony, 12 m. below which it unites with the Don-Nai; and the two Vaicos, which join the Don-Nai close to its mouth.

These rivers flow into the sea through numerous winding channels, forming a delta united by canals to that of the Mekong. The waterways of Cochin-China communicate by means of natural or artificial channels (arroyos), facilitating transport and aiding in the uniform distribution of the inundation to which the country owes its fertility. Canals from Chau-Doc to Ha-Tien and from Long Xuyen to Rach-Gia join the Mekong with the Gulf of Siam. East of Cape St Jacques the mountains of Annam come down close to the sea; west of that point, as far as the southern headland of Ca-Mau, the coast-line of Cochin-China runs north-east to south-west for about 160 m. in a straight line broken only by the mouths of the Don-Nai and Mekong. From Cape Ca-Mau to Rach-Gia it runs north for a distance of 120 m., then north-west as far as Ha-Tien, where the boundary line between it and Cambodia meets the sea.

Climate and Fauna.—The climate of the country is warm, humid, and very trying to Europeans. The wet season, during which heavy rain falls almost daily, lasts from April to October, coinciding with the south-west monsoon. The hottest period lasts from the middle of April to the middle of June, the thermometer during that time often reaching 94° F., and never descending below 86°. The forest regions of Cochin-China harbour the tiger, panther, leopard, tiger-cat, ichneumon, wild boar, deer, buffalo, rhinoceros and elephant, as well as many varieties of monkeys and rats. Of birds some species of parrakeet, the “mandarin” blackbird, and the woodcock are not found in the rest of Indo-China. Duck, teal, cranes and other aquatic birds abound in the delta. Venomous reptiles are numerous, and the Mekong contains crocodiles.

Agriculture and Industries.—The cultivation of the rice-fields, which cover large extents of the plains of Cochin-China, is by far the chief industry of the colony. Pepper is grown in considerable quantities in the districts of Ha-Tien and Bien-Hoa, and sugar-canes, coffee, cotton, tobacco and jute are also produced. The buffalo, used both for transport and in the rice-fields, and swine, the flesh of which forms an important element in the native diet, are the principal domestic animals. Oxen and cows are of secondary importance and the climate is unsuitable for sheep; horses of a small breed are used to some extent. The chief industrial establishments are those for the decortication of rice at Saigon and Cholon; they are in the hands of the Chinese, by whom most of the trade in the colony is conducted. Sugar-making, the distillation of rice-spirit, silk-weaving, fishing and the preparation of a fish-sauce (nuoc-mam) made from decayed fish, and the manufacture of salt from sea-water and of lime are carried on in many localities.

Commerce.—Rice is the chief article of export, dried or salted fish, pepper and cotton ranking next in order of value. Imports include woven goods, metals, ironware, machinery, tea, wines and spirits, mineral oils, opium, paper, and arms and powder. The ports of Saigon and Mytho are accessible to the largest vessels, and are connected by a railway. The roadsteads of Rach-Gia, Ca-Mau, and Ha-Tien can accommodate only vessels of low tonnage. In 1905 exports reached a value of £3,816,000, and imports a value of £4,834,000 (not including treasure and transit trade).

Government and Administration.—Cochin-China is administered by a lieutenant-governor under the authority of the governor-general of Indo-China. He is assisted by the conseil colonial numbering sixteen members, six of whom are French citizens elected by the French, six natives elected by the natives, the other four being members of the chamber of commerce of Saigon and the conseil privé. The conseil colonial, besides its advisory functions, discusses and votes the budget, determines the nature of the taxes, has supreme control over the tariffs, and extensive powers in the administration of colonial domains. The conseil privé is a deliberative body under the presidency of the lieutenant-governor, composed of colonial officials together with two native members. The colony is divided into four circumscriptions (Saigon, My-Tho, Vinh-Long, Bassac), at the head of each of which is an inspector of native affairs.

These are subdivided into twenty provinces, each administered by an administrator of native affairs by whose side is the provincial council consisting of natives and occupied with the discussion of ways and means and questions of public works. The provinces are divided into cantons and subdivided into communes. The commune forms the basis of the native social system. Its assembly of notables or municipal council forms a sort of oligarchy, the members of which themselves elect individuals from among the more prominent inhabitants to fill vacancies. The notables elect the provincial councillors in the proportion, usually, of one to every canton, and their delegates elect the chief of the canton, who voices the wishes of the natives to the government.

Local administration, e.g. supervision of markets, policing, land-transfer, &c., are carried on by a mayor and two assistants, to whom the municipal council delegates its powers. The same body draws up the list of males liable to the poll-tax and of the lands liable to land-tax, these being the chief sources of revenue. There are French tribunals of first instance in nine of the chief towns of the colony, and in four of these there are criminal courts. These administer justice in accordance both with French law and, in the case of natives, with Annamese law, which has been codified for the purpose. Saigon has two chambers of the court of appeal of French Indo-China and a tribunal of commerce. Primary instruction is given in some six hundred schools. Cochin-China is represented in the French chamber by a deputy. The capital is Saigon; of the other towns, Cholon, My-Tho, Vinh-Long and Chau-Doc are of importance.

There are no works available for the Cochinchina collection.