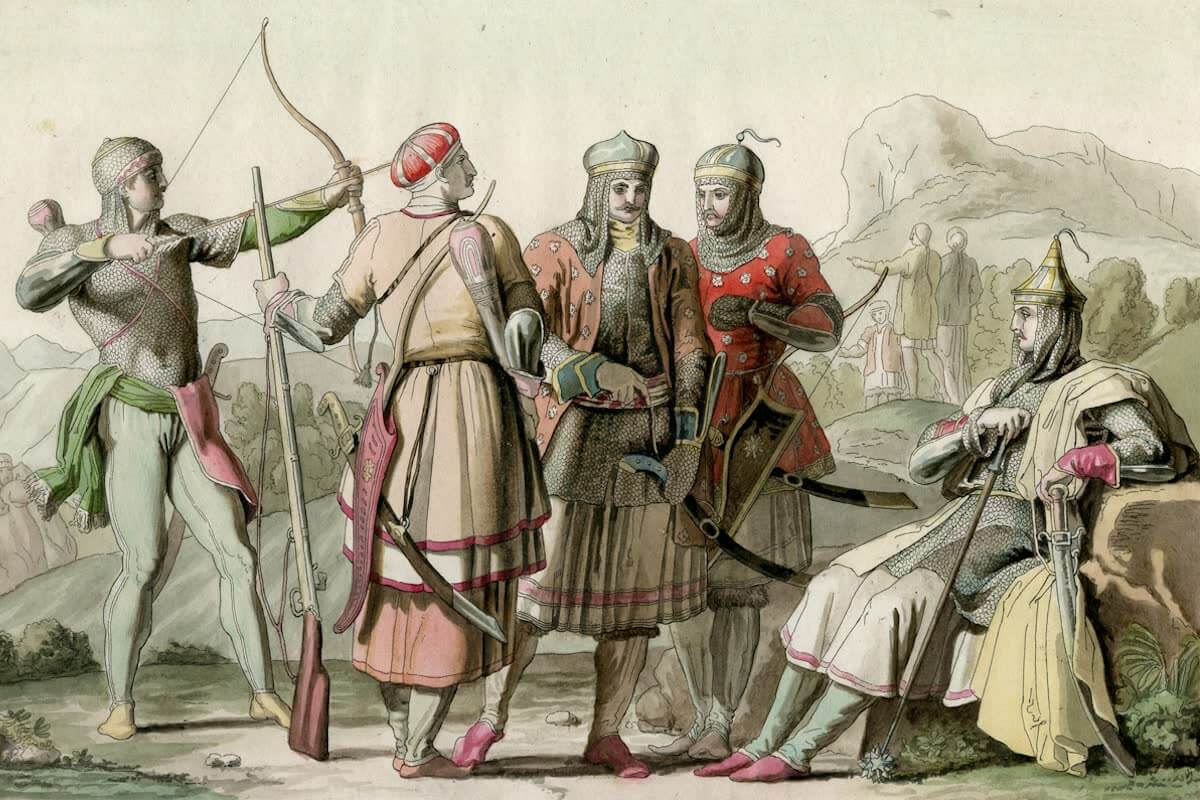 Circassia is a name formerly given to the north-western portion of the Caucasus, including the district between the mountain range and the Black Sea, and extending to the north of the central range as far as the river Kuban. Its physical features are described in the article on the Russian province of Kuban, with which it approximately coincides. The present article is confined to a consideration of the ethnographical relations and characteristics of the people, their history being treated under Caucasia.

The Cherkesses or Circassians, who gave their name to this region, of which they were until lately the sole inhabitants, are a peculiar race, differing from the other tribes of the Caucasus in origin and language. They designate themselves by the name of Adigheb, that of Cherkesses being a term of Russian origin. By their long-continued struggles with the power of Russia, during a period of nearly forty years, they attracted the attention of the other nations of Europe in a high degree, and were at the same time an object of interest to the student of the history of civilization, from the strange mixture which their customs exhibited of chivalrous sentiment with savage customs. For this reason it may be still worth while to give a brief summary of their national characteristics and manners, though these must now be regarded as in great measure things of the past.

In the patriarchal simplicity of their manners, the mental qualities with which they were endowed, the beauty of form and regularity of feature by which they were distinguished, they surpassed most of the other tribes of the Caucasus. At the same time they were remarkable for their warlike and intrepid character, their independence, their hospitality to strangers, and that love of country which they manifested in their determined resistance to an almost overwhelming power during the period of a long and desolating war. The government under which they lived was a peculiar form of the feudal system. The free Circassians were divided into three distinct ranks, the princes or pshi, the nobles or uork (Tatar usden), and the peasants or hokotl. Like the inhabitants of the other regions of the Caucasus, they were also divided into numerous families, tribes or clans, some of which were very powerful, and carried on war against each other with great animosity. The slaves, of whom a large proportion were prisoners of war, were generally employed in the cultivation of the soil, or in the domestic service of some of the principal chiefs.

The will of the people was acknowledged as the supreme source of authority; and every free Circassian had a right to express his opinion in those assemblies of his tribe in which the questions of peace and war, almost the only subjects which engaged their attention, were brought under deliberation. The princes and nobles, the leaders of the people in war and their rulers in peace, were only the administrators of a power which was delegated to them. As they had no written laws, the administration of justice was regulated solely by custom and tradition, and in those tribes professing Mahommedanism by the precepts of the Koran. The most aged and respected inhabitants of the various auls or villages frequently sat in judgment, and their decisions were received without a murmur by the contending parties. The Circassian princes and nobles were professedly Mahommedans; but in their religious services many of the ceremonies of their former heathen and Christian worship were still preserved. A great part of the people had remained faithful to the worship of their ancient gods—Shible, the god of thunder, of war and of justice; Tleps, the god of fire; and Seosseres, the god of water and of winds. Although the Circassians are said to have possessed minds capable of the highest cultivation, the arts and sciences, with the exception of poetry and music, were completely neglected. They possessed no written language. The wisdom of their sages, the knowledge they had acquired, and the memory of their warlike deeds were preserved in verses, which were repeated from mouth to mouth and descended from father to son.

The education of the young Circassian was confined to riding, fencing, shooting, hunting, and such exercises as were calculated to strengthen his frame and prepare him for a life of active warfare. The only intellectual duty of the atalik or instructor, with whom the young men lived until they had completed their education, was that of teaching them to express their thoughts shortly, quickly and appropriately. One of their marriage ceremonies was very strange. The young man who had been approved by the parents, and had paid the stipulated price in money, horses, oxen, or sheep for his bride, was expected to come with his friends fully armed, and to carry her off by force from her father’s house.

Every free Circassian had unlimited right over the lives of his wife and children. Although polygamy was allowed by the laws of the Koran, the custom of the country forbade it, and the Circassians were generally faithful to the marriage bond. The respect for superior age was carried to such an extent that the young brother used to rise from his seat when the elder entered an apartment, and was silent when he spoke. Like all the other inhabitants of the Caucasus, the Circassians were distinguished for two very opposite qualities—the most generous hospitality and implacable vindictiveness. Hospitality to the stranger was considered one of the most sacred duties. Whatever were his rank in life, all the members of the family rose to receive him on his entrance, and conduct him to the principal seat in the apartment. The host was considered responsible with his own life for the security of his guest, upon whom, even although his deadliest enemy, he would inflict no injury while under the protection of his roof.

The chief who had received a stranger was also bound to grant him an escort of horse to conduct him in safety on his journey, and confide him to the protection of those nobles with whom he might be on friendly terms. The law of vengeance was no less binding on the Circassian. The individual who had slain any member of a family was pursued with implacable vengeance by the relatives, until his crime was expiated by death. The murderer might, indeed, secure his safety by the payment of a certain sum of money, or by carrying off from the house of his enemy a newly-born child, bringing it up as his own, and restoring it when its education was finished. In either case, the family of the slain individual might discontinue the pursuit of vengeance without any stain upon its honour. The man closely followed by his enemy, who, on reaching the dwelling of a woman, had merely touched her hand, was safe from all other pursuit so long as he remained under the protection of her roof.

The opinions of the Circassians regarding theft resembled those of the ancient Spartans. The commission of the crime was not considered so disgraceful as its discovery; and the punishment of being compelled publicly to restore the stolen property to its original possessor, amid the derision of his tribe, was much dreaded by the Circassian who would glory in a successful theft. The greatest stain upon the Circassian character was the custom of selling their children, the Circassian father being always willing to part with his daughters, many of whom were bought by Turkish merchants for the harems of Eastern monarchs. But no degradation was implied in this transaction, and the young women themselves were generally willing partners in it. Herds of cattle and sheep constituted the chief riches of the inhabitants. The princes and nobles, from whom the members of the various tribes held the land which they cultivated, were the proprietors of the soil. The Circassians carried on little or no commerce, and the state of perpetual warfare in which they lived prevented them from cultivating any of the arts of peace.