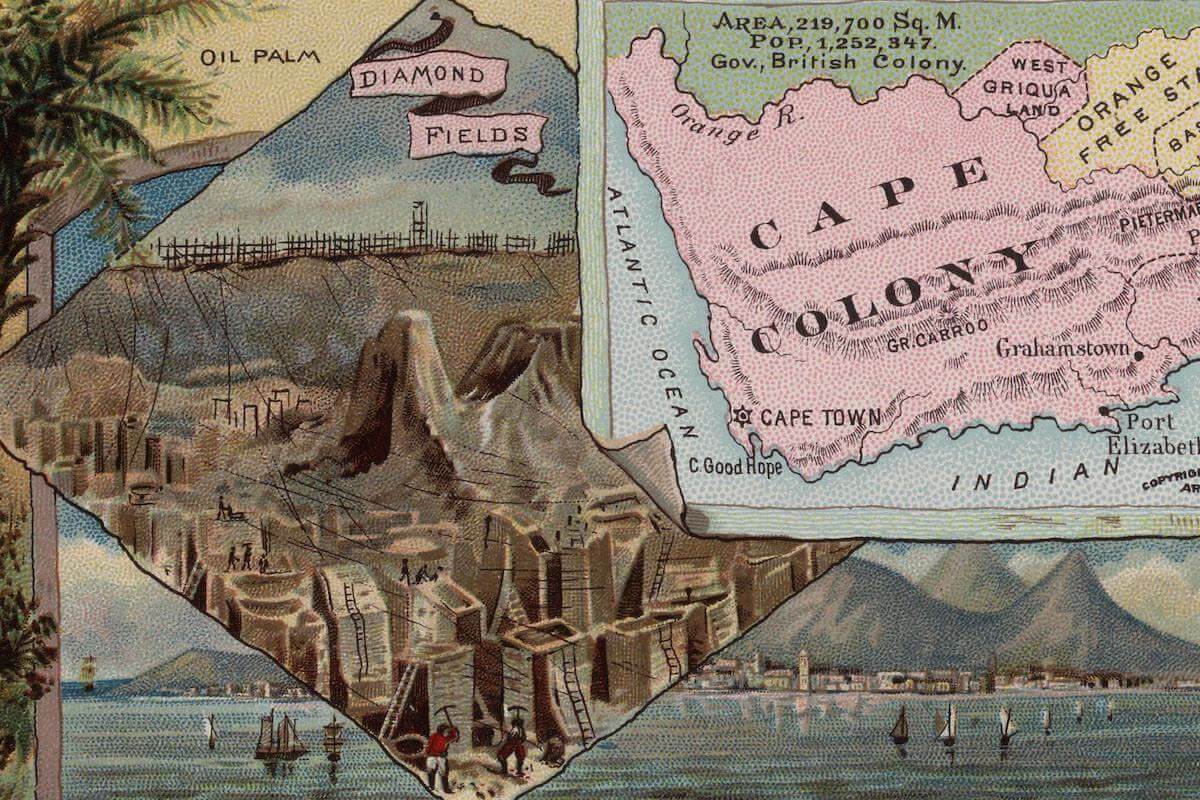 CAPE COLONY (officially, “Province of the Cape of Good Hope”), the most southern part of Africa, a British possession since 1806. It was named from the promontory on its south-west coast discovered in 1488 by the Portuguese navigator Diaz, and near which the first settlement of Europeans (Dutch) was made in 1652. From 1872 to 1910 a self-governing colony, in the last-named year it entered the Union of South Africa as an original province. Cape Colony as such then ceased to exist. In the present article, however, the word “colony” is retained. The “provinces” referred to are the colonial divisions existing before the passing of the South Africa Act 1909, except in the sections Constitution and Government and Law and Justice, where the changes made by the establishment of the Union are set forth. (See also South Africa.)

The British Settlers of 1820.—The war of 1817–19 led to the first introduction of English settlers on a considerable scale, an event fraught with far-reaching consequences. The then governor, Lord Charles Somerset, whose treaty arrangements with the Kaffir chiefs had proved unfortunate, desired to erect a barrier against the Kaffirs by settling white colonists in the border district. In 1820, on the advice of Lord Charles, parliament voted £50,000 to promote emigration to the Cape, and 4000 British were sent out.

These people formed what was known as the Albany settlement, founding Port Elizabeth and making Graham’s Town their headquarters. Intended primarily as a measure to secure the safety of the frontier, and regarded by the British government chiefly as a better means of affording a livelihood to a few thousands of the surplus population, this emigration scheme accomplished a far greater work than its authors contemplated. The new settlers, drawn from every part of the British Isles and from almost every grade of society, retained, and their descendants retain, strong sympathy with their native land. In course of time they formed a valuable counterpoise to the Dutch colonists, and they now constitute the most progressive element in the colony. The advent of these immigrants was also the means of introducing the English language at the Cape. In 1825, for the first time, ordinances were issued in English, and in 1827 its use was extended to the conduct of judicial proceedings. Dutch was not, however, ousted, the colonists becoming to a large extent bilingual.

Dislike of British Rule.—Although the colony was fairly prosperous, many of the Dutch farmers were as dissatisfied with British rule as they had been with that of the Dutch East India Company, though their ground of complaint was not the same. In 1792 Moravian missions had been established for the benefit of the Hottentots,[4] and in 1799 the London Missionary Society began work among both Hottentots and Kaffirs. The championship of Hottentot grievances by the missionaries caused much dissatisfaction among the majority of the colonists, whose views, it may be noted, temporarily prevailed, for in 1812 an ordinance was issued which empowered magistrates to bind Hottentot children as apprentices under conditions differing little from that of slavery.

Meantime, however, the movement for the abolition of slavery was gaining strength in England, and the missionaries at length appealed from the colonists to the mother country. An incident which occurred in 1815–1816 did much to make permanent the hostility of the frontiersmen to the British. A farmer named Bezuidenhout refused to obey a summons issued on the complaint of a Hottentot, and firing on the party sent to arrest him, was himself killed by the return fire. This caused a miniature rebellion, and on its suppression five ringleaders were publicly hanged at the spot—Slachters Nek—where they had sworn to expel “the English tyrants.” The feeling caused by the hanging of these men was deepened by the circumstances of the execution—for the scaffold on which the rebels were simultaneously swung, broke down from their united weight and the men were afterwards hanged one by one.

An ordinance passed in 1827, abolishing the old Dutch courts of landroost and heemraden (resident magistrates being substituted) and decreeing that henceforth all legal proceedings should be conducted in English; the granting in 1828, as a result of the representations of the missionaries, of equal rights with whites to the Hottentots and other free coloured people; the imposition (1830) of heavy penalties for harsh treatment of slaves, and finally the emancipation of the slaves in 1834[5]—all these things increased the dislike of the farmers to the government. Moreover, the inadequate compensation awarded to slave-owners, and the suspicions engendered by the method of payment, caused much resentment, and in 1835 the trekking of farmers into unknown country in order to escape from an unloved government, which had characterized the 18th century, recommenced. Emigration beyond the colonial border had in fact been continuous for 150 years, but it now took on larger proportions.

BIBLIOGRAPHY—The majority of the books concerning Cape Colony deal also with South Africa as a whole. The following list gives books specially relating to the Cape. For ethnography see the works mentioned under Bushmen, Hottentots, Kaffirs and Bechuana.

(a) Descriptive accounts, geography, commerce and economics:—The best early accounts of the colony are found in de la Caille's Journal historique du voyage fait au Cap de Bonne Espérance (Paris, 1763), the Nouvelle Description du Cap de Bonne Espérance (Amsterdam, 1778); F. le Vaillant's Voyage dans l'intérieur de l'Afrique (Paris, 1790), and Second Voyage (Paris, an III. [1794–1795]); C. P. Thunberg's “Account of the Cape of Good Hope” in vol. xvi. of Pinkerton's Travels (London, 1814); A. Sparman's Voyage to the Cape of Good Hope … 1772–1776 (translated into English from the Swedish, London, 1785)—an excellent work; and W. Paterson's A Narrative of Four Journeys … 1777–1779 (London, 1789). P. Kolbe or Kolben's Present State of the Cape of Good Hope (English translation from the German, London, 1731) is less trustworthy. Sir J. Barrow's Account of Travels into the Interior of Southern Africa in 1797–1798 (2 vols., London, 1801–1804); H. Lichtenstein's Travels in Southern Africa in 1803–1806 (translated from the German, 2 vols., London, 1812–1815), and W. J. Burchell's Travels in the Interior of Southern Africa (2 vols., London, 1822–1824) are standard works. Burchell's book contains the best map of the Cape published up to that time. W. P. Greswell's Geography of Africa south of the Zambesi (Oxford, 1892) deals specially with Cape Colony; the Illustrated Official Handbook of the Cape and South Africa (Cape Town, 1893) includes chapters on the zoology, flora, productions and resources of the colony. A. R. E. Burton, Cape Colony To-day (Cape Town, 1907), a useful guide to the country and its resources. A Statistical Register is issued yearly by the Cape government. The Census of the Colony, 1904: General Report (Cape Town, 1905) and previous census reports contain much valuable matter.

There are no works available for the Cape Colony collection.