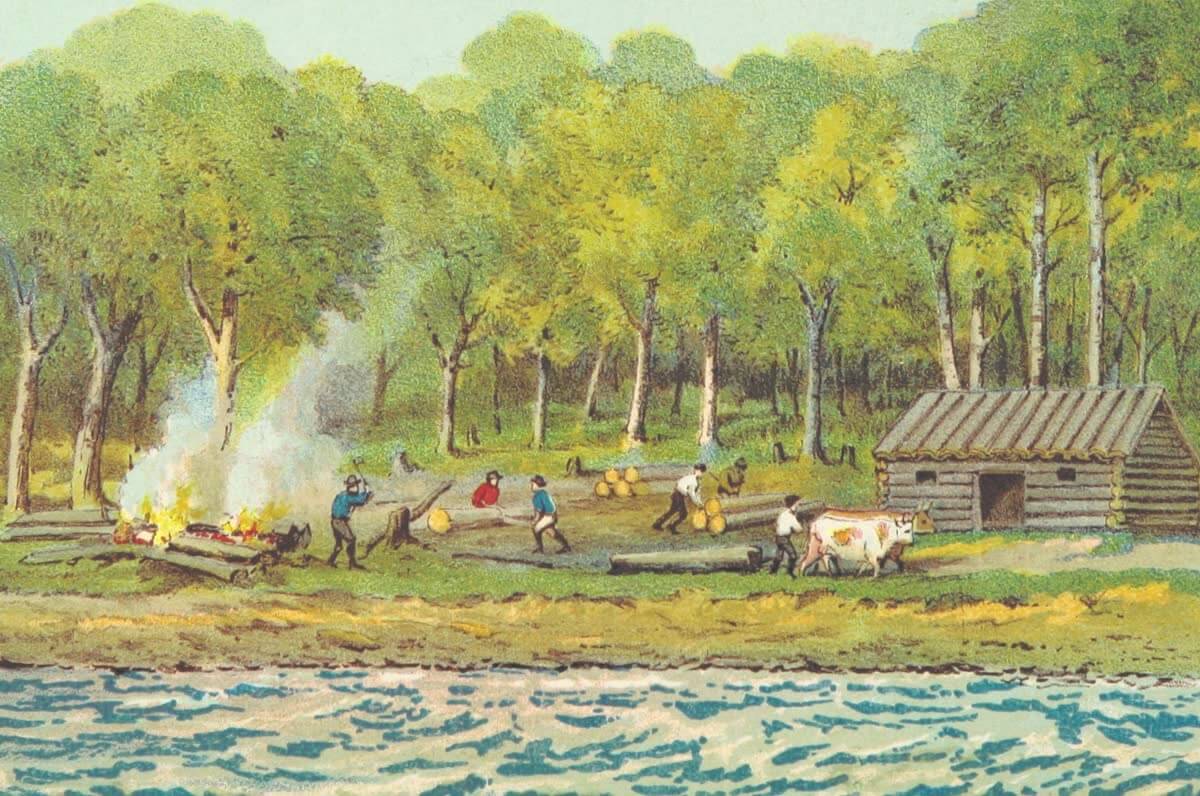 Canada comprises the northern half of the continent of North America and its adjacent islands, excepting Alaska, which belongs to the United States. Its boundary on the south is the parallel of latitude 49&176;, between the Pacific Ocean and Lake-of-the-Woods, then a chain of small lakes and rivers eastward to the mouth of Pigeon river on the north-west side of Lake Superior, and the Great Lakes with their connecting rivers to Cornwall, on the St Lawrence.

From this eastward to the state of Maine the boundary is an artificial line nearly corresponding to lat. 45&176;; then an irregular line partly determined by watersheds and rivers divides Canada from Maine, coming out on the Bay of Fundy. The western boundary is the Pacific on the south, an irregular line a few miles inland from the coast along the "pan handle" of Alaska to Mount St Elias, and the meridian of 141&176; to the Arctic Ocean. A somewhat similar relationship cuts off Canada from the Atlantic on the east, the north-eastern coast of Labrador belonging to Newfoundland.

The first few decades of the period of British rule were lean years indeed so far as native literature is concerned. This period of unrest gave birth to little beyond a flood of political pamphlets, of no present value save as material for the historian. We may perhaps except the able though thoroughly partisan writings of Sir John Beverley Robinson and Bishop Strachan on the one side, and Robert Fleming Gourlay and William Lyon Mackenzie on the other.

In the far West, however, a little group of adventurous fur-traders, of whom Sir Alexander Mackenzie, David Thompson, Alexander Henry and Daniel Williams Harmon may be taken as conspicuous types, were unfolding the vast expanse of the future dominion. They were men of action, not of words, and had no thought of literary fame, but their absorbingly interesting journals are none the less an essential part of the literature of the country.

Barring the work of Francis Parkman, who was not a Canadian, no history of the first rank has yet been written in or of Canada. Canadian historians have not merely lacked so far the genius for really great historical work, but they have lacked the point of view; they have stood too close to their subject to get the true perspective. At the same time they have brought together invaluable material for the great historian of the future.

Robert Christie's History of Lower Canada (1848-1854) was the first serious attempt to deal with the period of British rule. William Kingsford's (1819-1898) ambitious work, in ten volumes, comes down like Christie's to the Union of 1841, but goes back to the very beginnings of Canadian history. In the main it is impartial and accurate, but the style is heavy and sometimes slovenly. J. C. Dent's (1841-1888) Last Forty Years (1880) is practically a continuation of Kingsford.

Dent also wrote an interesting though one-sided account of the rebellion of 1837. Histories of the maritime provinces have been written by Thomas Chandler Haliburton, Beamish Murdoch and James Hannay. Haliburton's is much the best of the three. The brief but stirring history of western Canada has been told by Alexander Begg (1840-1898); and George Bryce (b. 1844) and Beckles Willson (b. 1869) have written the story of the Hudson's Bay Company.

Much scholarship and research have been devoted to local and special historical subjects, a notable example of which is Arthur Doughty's exhaustive work on the siege of Quebec. J. McMullen (b. 1820), Charles Roberts (b. 1860) and Sir John Bourinot (1837-1902) have written brief and popular histories, covering the whole field of Canadian history more or less adequately. Alpheus Todd's (1821-1884) Parliamentary Government in England (1867-1869) and Parliamentary Government in the British Colonies (1880) are standard works, as is also Bourinot's Parliamentary Procedure and Practice (1884).