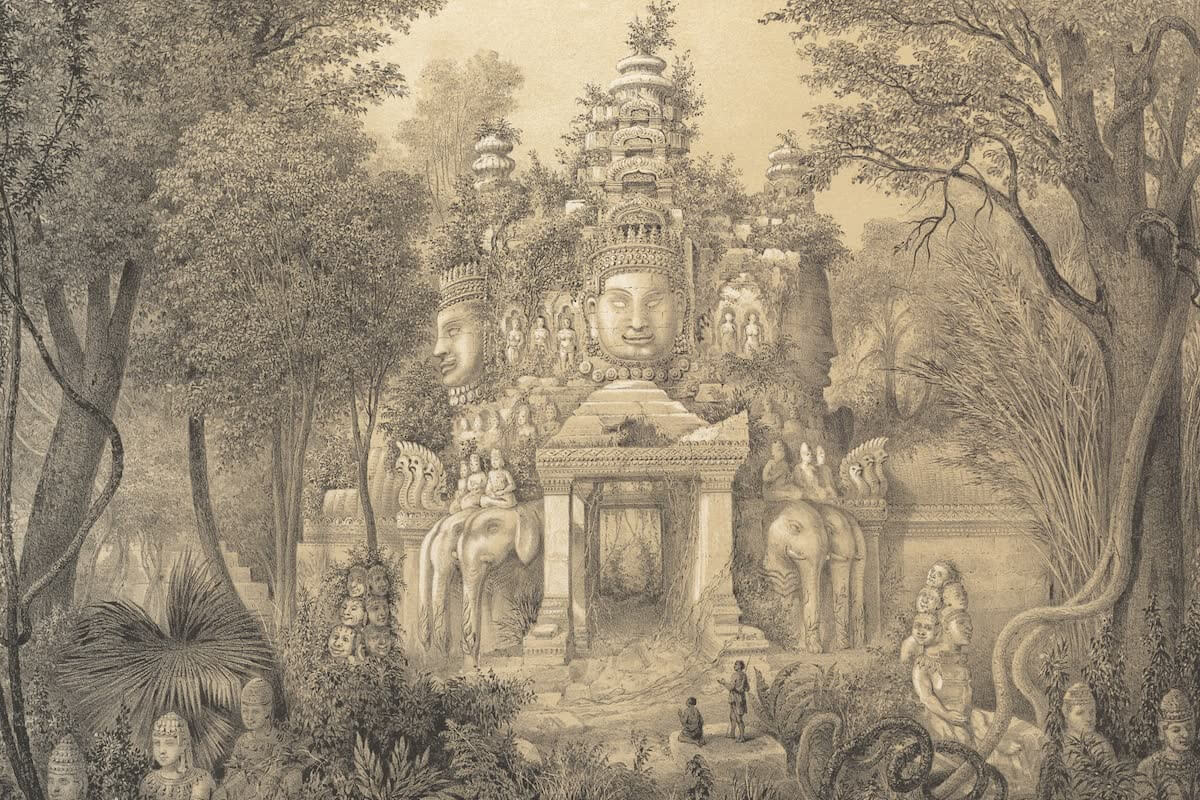 Cambodia, a state in Indo-China under French control, on the lower course of the Mekong River, south of Siam. It is 220 miles long and 150 miles broad, with an area of 37,400 square miles, not including the region ceded to France in 1907 by Siam. Along the coast are several islands, one bay and but one port, Kampot. Its external trade is carried on mostly through Saigon in Cochin China.

The ancient kingdom of Cambodia or Khmer extended over a large part of Indo-China. In the 17th century it was dismembered, and Anam and, later, Siam acquired large portions of it. The Portuguese in the 16th century were the first Europeans to enter the country, and were followed by the Spaniards and the Dutch. In 1858 France first appeared in Indo-China, and in 1863 made a treaty with Norodom, king of Cambodia, by which Cambodia was placed under a French protectorate.

Cambodia has now placed over it a resident-general under the governor-general of Indo-China. The most remarkable thing in Cambodia is the splendid ruins of the architecture of the Khmer kingdom. The temples, palaces and monuments scattered everywhere are wonderful for their size and artistic grandeur. In a single temple there are 1,532 columns. Among the ruins are also massive stone bridges, one measuring 470 feet in length, with 34 arches. The present inhabitants look upon these structures of their ancestors as the work of angels or giants. Population about 1,500,000.

The mountains in the north and west contain iron, limestone, sandstone and some copper. The greater part of the country consists of plains of rich loam, which yield abundantly with almost no cultivation. The main river, the Mekong, flows through the country in a generally southwesterly direction. Great Lake has an area of 100 miles by 25, and its greatest depth is 65 feet. Rice, cotton, indigo, betel, tobacco, maize, cinnamon, pepper, sugar-cane, etc. are raised; and among the animals are the elephant, tiger, panther and rhinoceros. Crocodiles are found in most of the rivers.

The people are tall and robust, copper-colored, with long skull, flat nose and eyes slightly oblique. They are, however, indolent and passive from long oppression and because of the little work required for subsistence. Fishing in Great Lake is the main industry. Lines of steamers ply on the Mekong. Pnom-Penh, the capital, has a population of 50,000. Here is a large school, with two French professors and a native teacher. The religion is developed from Buddhism, the worship of ancestors forming an important part. The language is much like those of Siam and Anam.

There are no works available for the Cambodia collection.