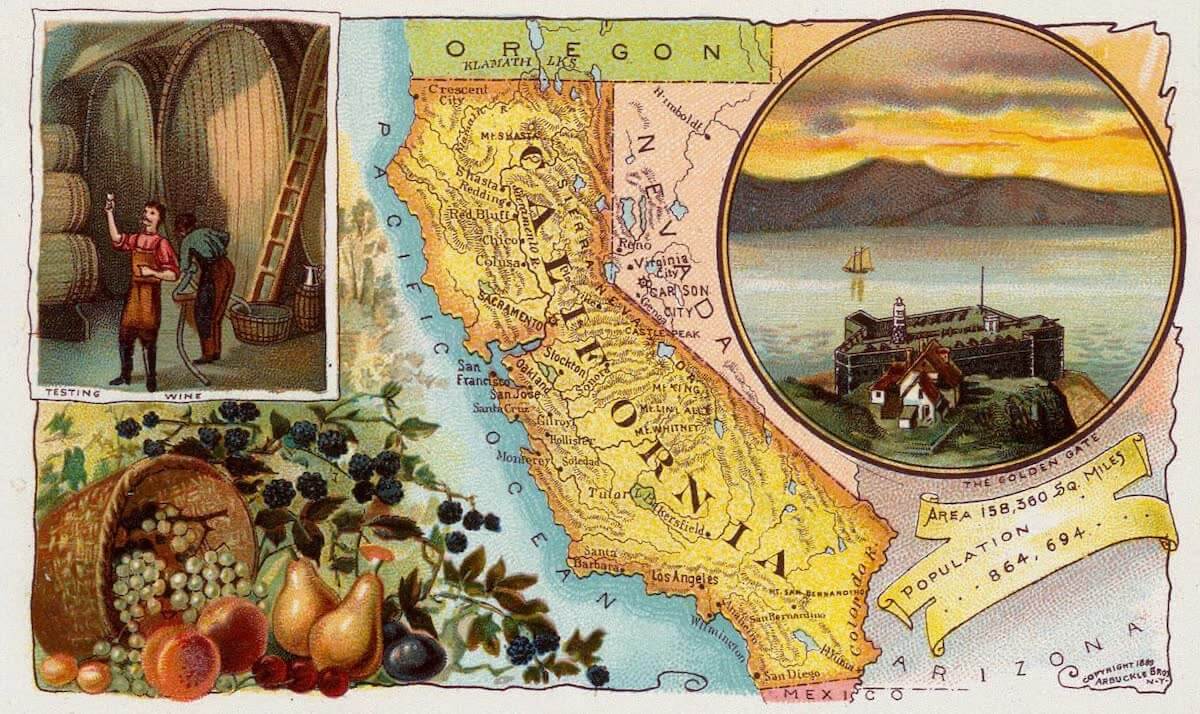 Excepting Texas, California is the largest state in the Union. It extends from the Oregon line on the north to the Mexican boundary on the south, a length of nearly a thousand miles; and from the waters of the Pacific Ocean on the west to the crest line of the Sierra Nevada Mountains on the east, a width of over two hundred miles. It is two and one half times as large as all New England, containing 158,360 square miles.

The coast was visited by Sir Francis Drake in 1579. The first settlement was made at San Diego in 1769 by Spanish priests coming from Mexico. A chain of twenty-one missions for christianizing the Indians was built along the coast by the Franciscan fathers during the next fifty years, among them San Luis Rey, San Juan Capistrano, San Gabriel, San Buenaventura, Santa Barbara, Santa Ynez, San Luis Obispo and Monterey, reaching from San Diego in the south to Sonoma in the north.

These missions became rich in flocks and herds and choicest lands. The social life and the political history of California revolved around them. The Mexican government secularized the missions in 1834, and during the next few years the Mexican governors of California granted their rich lands to Spanish and Mexican families. These grants form the basis of the land-system to the present day.

California came into the possession of the United States in 1848, at the close of the Mexican War, by the treaty of Guadalupe Hidalgo. Gold was discovered at Coloma in the Sacramento Valley the same year. This at once brought a rush of population that was the wonder of the world. In 1850 the state was admitted full fledged to the Union. Since that time its history has been merged in that of the United States.

The population at the census of 1910 was 2,377,549. The largest city is San Francisco, with a population of 416,912. Los Angeles is a close second, having now passed the 300,000 mark. Other chief cities in the order of size are Oakland, San Jose, Sacramento (the state capital), San Diego, Stockton and Fresno.

It is a state of striking contrasts. It contains the highest land in the United States (excluding Alaska) in the summit of Mt. Whitney, 14,500 feet above sea-level; and also the lowest land, in the bottom of Death Valley, some 300 feet below the level of the sea. In the southeastern corner are the vast areas of the Colorado Desert, the hottest and driest region of our country, where there is practically no rainfall, and the thermometer rises to 130° in the shade; and in the opposite or northwestern corner are the dark and dripping forests of Del Norte County, where the rainfall is eighty inches per year. There are alpine climates in the Sierran counties; marine climates in the coast counties; humid climates in the northern counties; arid climates in the eastern counties; semi-tropic climates in the southern counties. There are many thermal belts and local areas of special climatic conditions, as for instance, Boulder Creek in Santa Cruz County, where the rainfall is eighty or ninety inches, although surrounded by lands where it is only twenty inches or less; and Imperial County, below the level of the sea, where melons and apricots ripen in the open air in May, peaches and grapes in June; and the orchards of Butte County in the northern part of the state, where great orange groves produce abundantly in the latitude of Ohio and New York.

Products and Industries. This variety in surface and climate makes a corresponding variety in the soils, the crops and the activities and occupations of man. Thus, the north coast is devoted to lumbering. Three hundred million feet of lumber per year are made from the splendid redwood trees (Sequoia Sempervirens) and shipped to the markets of the world, particularly to the ports of the Pacific Ocean.

The middle coast is devoted to dairying. The cool, even temperature and abundant moisture produce fine pasturage nearly all the year. Swiss, Italian and Portuguese settlers are found in large numbers, and butter and cheese are the staple products.

The southern coast is a vast summer resort. The soft, luxurious climate, the sea-bathing, the picturesque scenery, the fruits and flowers form attractions that draw countless thousands of people from all parts of the United States and from foreign countries as well. Santa Barbara, San Buenaventura, Venice, Newport, Long Beach, Naples, Ocean Park, Huntington Beach, San Diego, Oceanside, Coronado and Santa Monica are some of the best known towns.

The interior of California on the north consists of the Sacramento Valley, an empire of agricultural land. It is abundantly watered by the streams flowing down from the neighboring mountains in to the Sacramento River. The soil is deep and rich and is adapted to all the agricultural and horticultural products of the temperate zone. Sacramento ships each year 6,000 carloads of fruit to the eastern states, principally peaches, strawberries, pears and grapes. Wheat, barley, potatoes and asparagus are produced in great quantities for the world's markets.

The central interior consists of the San Joaquin Valley, which is cut off from the southern part of the state by the Tehachapi Mountains, a transverse range connecting the Sierras and Coast Range. This valley rivals the Sacramento in its great extent and its fertility, but, lying further south, it is not so abundantly watered. Wheat and raisins are its staple crops. Fresno ships 5,000 carloads of raisins per year. The oil fields of Kern County are assuming great importance. There is a Standard-Oil pipe-line leading two hundred miles northerly to San Francisco.

The southern interior is largely devoted to growing citrus fruits, Riverside, Redlands, Ontario, Pomona, Azusa and Highlands are some of the centers for the orange and lemon groves. Riverside alone ships 6,000 carloads of oranges per year. This region depends upon irrigation for its prosperity. It virtually is a reclaimed desert. All the fruits and flowers of the temperate and semitropic regions thrive. In one orchard maybe grown oranges, lemons, citrons, pomelos, apples, peaches, pears, apricots, nectarines, plums, prunes, pomegranates, guavas, quinces, figs, olives, grapes of more than a hundred kinds, blackberries, raspberries, strawberries, loganberries, walnuts, chestnuts and almonds. The wealth of ornamental trees and flowering plants is too great to catalogue. A number of ostrich farms raise plumes for the market. Hundreds of apiaries produce honey in hundreds of tons.

The chief products, with the approximate annual output, are as follows: fruit products, 90 thousand carloads; lumber, 600 million feet; wool, 25 million pounds; wheat, 17 million bushels; petroleum, 33 million barrels. Of vinuous liquors the State of California alone produces 68.1% of the total for the United States, and California champagne took the Grand Prize in Paris in 1912.

The Sierran region yields the gold that makes California the golden state. It includes great lumbering interests in pine, cedar and giant-redwood forests. It affords pasturage for innumerable flocks and herds. Its streams and waterfalls are the source of power sufficient to gridiron the entire state with electric railways and to turn the wheels and light the lamps of a thousand industries. The central part of this great mountain mass is known as the High Sierras, and affords the playground for the continent. Nineteen peaks are above 10,000 feet in height. There are many hundreds of lovely lakes, of which Tahoe is the largest. There are scores of magnificent waterfalls, such as those of the Yosemite Valley. There are stupendous chasms bordered by minarets and towers, as King's River, Hetch-Hetchy and Kern River Canyons.

There are rich mountain meadows and clear, cold trout-streams and snow-covered mountain tops above the timber line. The botanist, the fisherman, the hunter, the lover of out door nature may wander for months in this wide wonderland among the clouds, traveling all the time and never seeing the same thing twice. The exquisite golden trout of Volcano Creek is here. The big-tree groves of Sequoia Gigantea are here, with single trees 325 feet high, 120 feet in circumference. There are canyons with perpendicular walls 4,000 feet deep. The whole region should be set apart as the great pleasure-ground of America, to be held and cared for by the nation through all generations.

Minerals. There is a very wide range in mineral products. Gold has already been spoken of. Silver and lead are produced in the south. Shasta County has great copper smelters. Mercury is produced by Santa Clara and Lake Co on ties. The gem-mines of San Diego County are becoming famous for their tourmalines, beryls, kunzites and garnets. Opals, jade, turquoise, diamonds and chrysoprase are found in merchantable quantities within the state. There are great slate-quarries and asbestos mines in El Dorado County. Iron is being smelted in an electric furnace in Shasta County. Lithia rock is mined in San Diego County, and lignite coal in Contra Costa County. The borax, soda and salt deposits of the southern deserts are important exports. Manganese, molybdenum, onyx, gypsum, serpentine, talc, graphite, marble, magnesite, fluor spar, heavy spar, lime, cement, potters' clay, glass sand, infusorial earth, mica, asphaltum, tin and antimony also are found in different parts of the state. The total value of mineral products was over 86 million dollars in 1910. The petroleum output was largest, amounting to over 35 millions. Gold stands next in importance, and Portland cement third.

Transportation. In commerce, California is the gate to the Orient. The spacious and noble harbor of San Francisco floats the ships of the world. Second in excellence is the harbor of San Diego in the south. Humboldt Bay, San Pedro Bay and Tomales Bay afford good harbors. The Sacramento and San Joaquin Rivers are navigable into the heart of the agricultural interior, making cheap freight rates for farm-products. Five transcontinental railroads come into the state from the east. There are 6,000 miles of steam railroads within the state. Suburban electric lines for passengers and freight reach for trade in every direction, stimulated by the abundant power of the mountain waterfalls. The completion of the Panama Canal will greatly add to California's commercial advantage, extending her markets and lowering the freight rates to the eastern states and all Atlantic ports.

Manufactures. The manufacturing establishments are mostly found in San Francisco and around the shores of San Francisco Bay. They include sugar refineries, oil refineries, flour mills, powder mills, reduction works, tanneries, machine shops, chemical works. There are extensive canneries for fruit and vegetables in all parts of the state. There are nine large beet-sugar factories, producing more than 40 thousand tons of sugar per year. The value of manufactured products is over five hundred million dollars per year.

Education. The educational system stands very high. It undertakes to provide as good a teacher and as well equipped a school for the small remote rural communities as for the larger centers of population. Every district must maintain a free school for at least six months every year. Sixty dollars per month are a minimum salary for the rural teacher. Thirty dollars per year per pupil are raised for the schools by public taxation on the state and the county. The rural school houses and grounds throughout the state are remarkably handsome and well improved. Few of them cost less than $2,000 each. The county is the unit in school administration, presided over by a county superintendent of schools and a county board of education. Over the whole state there are a superintendent of public instruction and a state board of education. By way of higher education there are eight state normal schools, over two hundred high schools, one polytechnic school, a state university with 3,000 students, the famous Leland Stanford Jr. University, with an endowment of thirty million dollars, and a large number of sectarian and private institutions. There are two state reform-schools and about forty orphan schools.