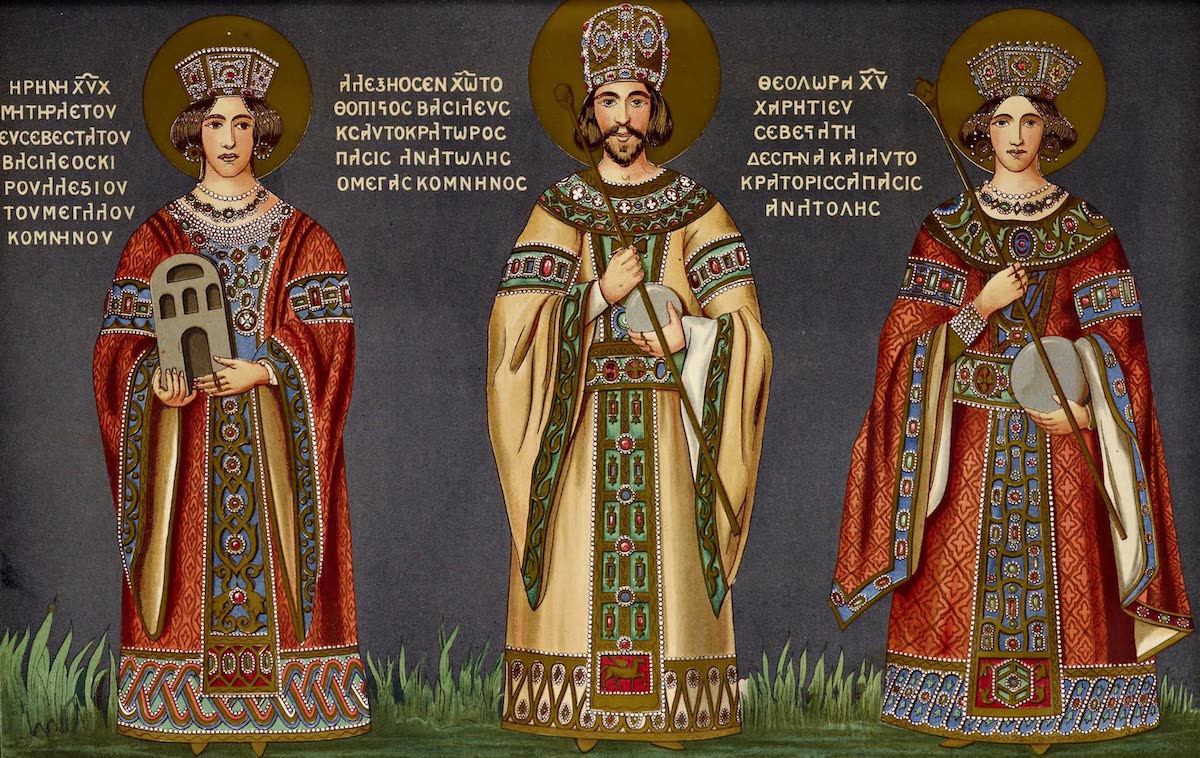 Byzantine Empire, also called the East Roman, Eastern, Greek or Lower Empire, was founded in 395 A. D., when Theodosius the Great divided the Roman empire between his two sons, Honorius and Arcadius. Arcadius was made emperor of the eastern division: Syria, Asia Minor and Pontus in Asia; Egypt in Africa; and Thrace, Moesia (now Bulgaria), Macedonia, Greece and Crete in Europe. The empire thus formed lasted for more than a thousand years, and underwent a great variety of fortune. It took the name Byzantine from Byzantium, the old name of its capital, which, after 330 A. D., was usually called Constantinople or New Rome.

The period of Greek revival (395-716), as it is called, is marked by the victories of Justinian and Heraclius. Justinian (527-565) is celebrated for his code of laws and the victories of his great generals, Belisarius and Narses. Maurice (582-602), by his weak rule brought the country to a condition of lawlessness from which it was rescued by Heraclius, who overthrew him, and reigned from 610 to 641. Great as his genius was, he suffered 12 years of defeat before he could organize a victorious army. In 622 he began those splendid campaigns in which Persia was crushed, and which, Gibbon says, were equal to those of Scipio or Hannibal.

The period of prosperity lasted from 716-1057, and was marked by successful defense against Saracens and Bulgarians. Leo III, Constantine V, Leo IV, Basilius I and Nicephorus Phocas all won victories over the Saracens and Bulgarians. The dynasty founded by Basilius held the throne most of the time from 867 to 1056. John Zimices (969-976) won victories over Saracens, Bulgarians and Russians, while Basilius II (976-1025) conquered the Bulgarian kingdom. At the beginning of the 11th century the Saracen power, which had so long been dangerous to the empire, broke up, but the Seljuk Turks, a yet more formidable enemy, appeared on the eastern frontier.

The period of the decline (1057-1204) was marked by the crusades and the advance of the Turkish power. With Isaac Comnenus (1057-1059) the Comnenian dynasty began. In the reign of Alexius Comnenus (1081-1118) began the crusades, in which the Byzantine emperors had a hard part to play. The crusades, however, helped greatly to check the advance of the Turks, whose power already reached to the Hellespont. The last Comnenian prince, Andronicus, was killed in a rising excited by his own cruelty, in 1185, and left the country in a state of utter confusion.

The period of Latin occupation lasted from 1204 to 1261. In 1204 the French and Venetians, together called Latins, marched on Constantinople and captured it. The European part of the empire was carved into four divisions; the first part, including Constantinople, fell to the lot of Baldwin, the Count of Flanders. In Asia, Theodoras Lascaris set up a government at Nicaea, and Alexius Comnenus ruled at Trebizond. The Latin occupation was hurtful to the empire, which never regained its lost unity. Michael (VIII) Palaeologus, one of the rulers of Nicaea, captured Constantinople in 1261 with the aid of the Genoese, and so put an end to the Latin dynasty.

The period of the fall (1261-1453) was marked by the quick oncoming of the Turks. They took Nicaea in 1339, and first made a settlement in Europe by capturing Gallipoli in 1354. Adrianople fell in 1361, and became the Ottoman capital. By 1381 all that was left of the Byzantine empire became tributary to the Turks. The sultan, Bajazet, by defeating the Hungarians in 1396 forced Manuel II to cede to him a street in Constantinople. The whole city would soon have fallen had not Timur, the Tartar conqueror, defeated Bajazet at Angora in 1402. At last the capital fell before Mohammed II, May 29, 1453, when the Byzantine empire was brought to a close.

On the throne of this great empire, to which modern Europe owes its moral and intellectual development and which maintained a struggle with darkness for 1,000 years, sat 76 emperors and five empresses. Of these, 15 were put to death; seven were blinded or otherwise mutilated; four were deposed or imprisoned in monasteries; and ten were compelled to abdicate. In the 4th century she fought the Goths; in the 5th the Huns and Vandals; in the 6th the Slavs; in the 7th the Persians and Arabs; in the 8th, 9th and 10th the Bulgars, Magyars and Russians; in the 11th the Seljukian Turks; the Ottomans, Normans, Venetians, Crusaders and the Genoese. "No wonder she at last fell exhausted."

Reviewing its entire annals, the history of the fall of the empire may be said to be the record of a noble struggle in the face of overwhelming odds. For many centuries it was the bulwark of Christian culture.

See Gibbon's Decline and Fall of the Roman Empire and Finlay's and Grote's Histories of Greece.