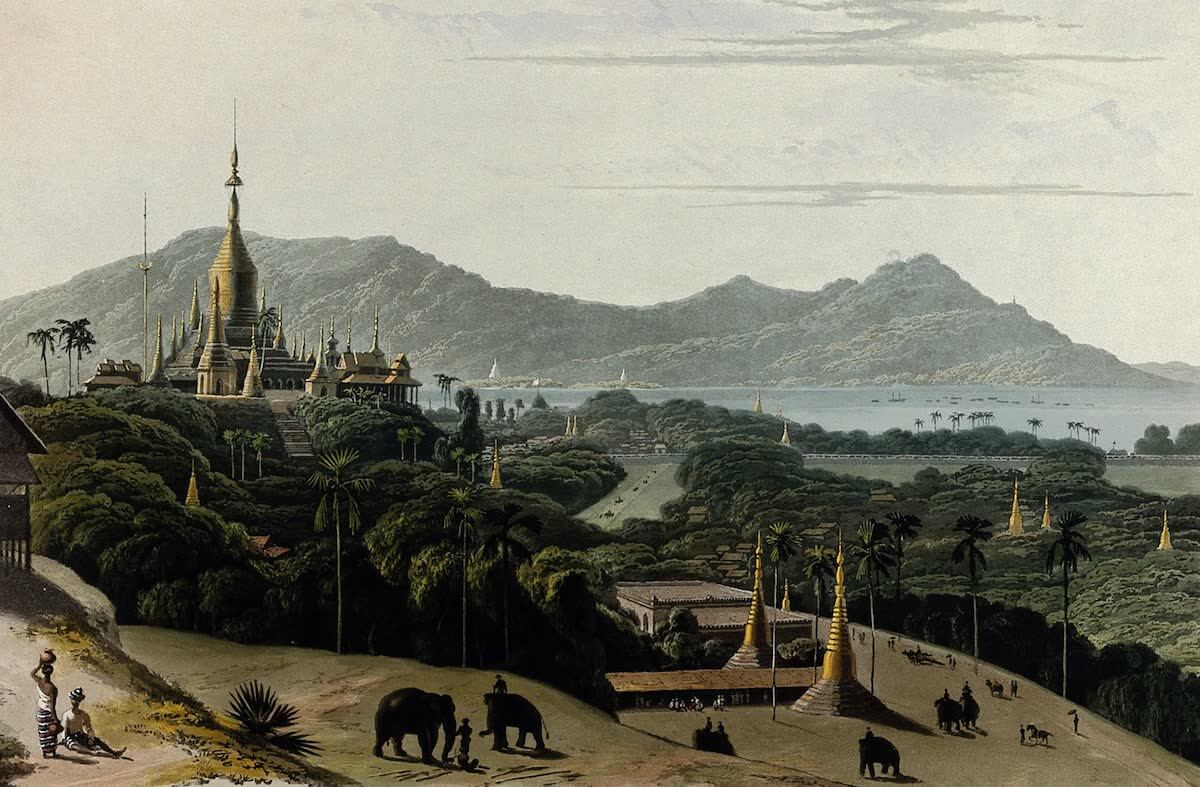 Burma, presently known as Myanmar, is a country in Southeast Asia. Myanmar is bordered by India and Bangladesh to its west, Thailand and Laos to its east and China to its north and northeast. Burma is the largest of the mainland Southeast Asian states.

Early civilisations in Myanmar included the Tibeto-Burman-speaking Pyu city-states in Upper Burma and the Mon kingdoms in Lower Burma. In the 9th century, the Bamar people entered the upper Irrawaddy valley and, following the establishment of the Pagan Kingdom in the 1050s, the Burmese language, culture and Theravada Buddhism slowly became dominant in the country. The Pagan Kingdom fell due to the Mongol invasions and several warring states emerged.

In the 16th century, reunified by the Taungoo dynasty, the country was for a brief period the largest empire in the history of Mainland Southeast Asia.[10] The early 19th century Konbaung dynasty ruled over an area that included modern Myanmar and briefly controlled Manipur and Assam as well. The British took over the administration of Myanmar after three Anglo-Burmese Wars in the 19th century and the country became a British colony. Burma was once a province of British India, including the former kingdom of independent Burma, as well as British Burma. It was acquired by the British Indian government in the two wars of 1826 and 1852. It is divided into Upper and Lower Burma, the former being the territory annexed on 1st January 1886. Myanmar was granted independence in 1948, as a democratic nation. Following a coup d'état in 1962, it became a military dictatorship under the Burma Socialist Programme Party.

The province lies to the east of the Bay of Bengal, and covers a range of country extending from the Pakchan river in 9° 55' north latitude to the Naga and Chingpaw, or Kachin hills, lying roughly between the 27th and 28th degrees of north latitude; and from the Bay of Bengal on the west to the Mekong river, the boundary of the dependent Shan States on the east, that is to say, roughly, between the 92nd and 100th degrees of east longitude. The extreme length from north to south is almost 1200 m., and the broadest part, which is in about latitude 21° north, is 575 m. from east to west.

On the N. it is bounded by the dependent state of Manipur, by the Mishmi hills, and by portions of Chinese territory; on the E. by the Chinese Shan States, portions of the province of Yunnan, the French province of Indo-China, and the Siamese Shan, or Lao States and Siam; on the S. by the Siamese Malay States and the Bay of Bengal; and on the W. by the Bay of Bengal and Chittagong. The coast-line from Taknaf, the mouth of the Naaf, in the Akyab district on the north, to the estuary of the Pakchan at Maliwun on the south, is about 1200 m. The total area of the province is estimated at 238,738 sq.m., of which Burma proper occupies 168,573 sq.m., the Chin hills 10,250 sq.m., and the Shan States, which comprise the whole of the eastern portion of the province, some 59,915 sq.m.

It is probable that Burma is the Chryse Regio of Ptolemy, a name parallel in meaning to Sonaparanta, the classic P?li title assigned to the country round the capital in Burmese documents. The royal history traces the lineage of the kings to the ancient Buddhist monarchs of India. This no doubt is fabulous, but it is hard to say how early communication with Gangetic India began.

From the 11th to the 13th century the old Burman empire was at the height of its power, and to this period belong the splendid remains of architecture at Pagan. The city and the dynasty were destroyed by a Chinese (or rather Mongol) invasion (1284 A.D.) in the reign of Kublai Khan. After that the empire fell to a low ebb, and Central Burma was often subject to Shan dynasties. In the early part of the 16th century the Burmese princes of Toungoo, in the north-east of Pegu, began to rise to power, and established a dynasty which at one time held possession of Pegu, Ava and Arakan.

They made their capital at Pegu, and to this dynasty belong the gorgeous descriptions of some of the travelers of the 16th century. Their wars exhausted the country, and before the end of the century it was in the greatest decay. A new dynasty arose in Ava, which subdued Pegu, and maintained their supremacy throughout the 17th and during the first forty years of the 18th century. The Peguans or Talaings then revolted, and having taken the capital Ava, and made the king prisoner, reduced the whole country to submission. Alompra, left by the conqueror in charge of the village of Môtshobo, planned the deliverance of his country. He attacked the Peguans at first with small detachments; but when his forces increased, he suddenly advanced, and took possession of the capital in the autumn of 1753.