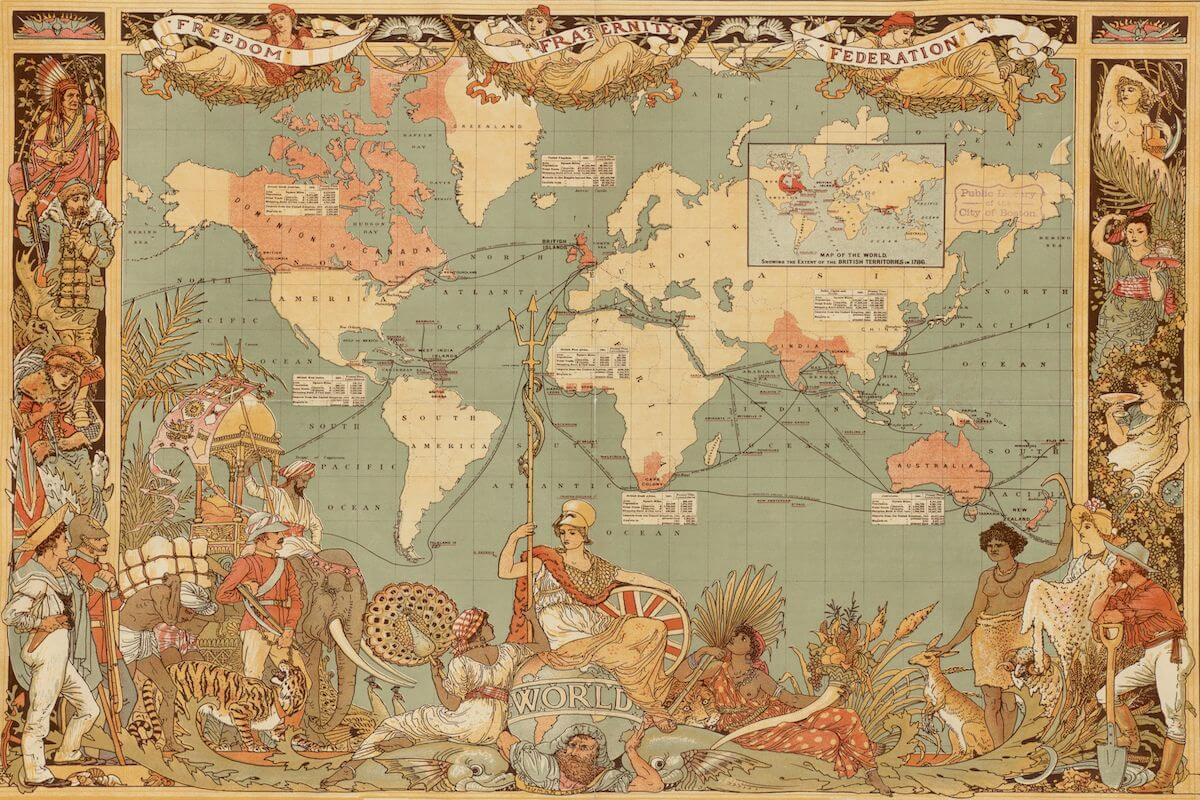 BRITISH EMPIRE, the name now loosely given to the whole aggregate of territory, the inhabitants of which, under various forms of government, ultimately look to the British crown as the supreme head. The term "empire" is in this connexion obviously used rather for convenience than in any sense equivalent to that of the older or despotic empires of history.

The land surface of the earth is estimated to extend over about 52,500,000 sq. m. Of this area the British empire occupies nearly one-quarter, extending over an area of about 12,000,000 sq. m. By far the greater portion lies within the temperate zones, and is suitable for white settlement. The notable exceptions are the southern half of India and Burma; East, West and Central Africa; the West Indian colonies; the northern portion of Australia; New Guinea, British Borneo and that portion of North America which extends into Arctic regions.

As a matter of fact, however, the eastern portions of Australasia border so nearly upon the western hemisphere that the distribution of day and night throughout the empire is, like the alternations of the seasons, almost complete, one-half enjoying daylight, while the other half is in darkness. These alternations of time and of seasons, combined with the variety of soils and climates, are calculated to have an increasingly important effect upon the material and industrial, as well as upon the social and political developments of the empire. This will become evident in considering the industrial productions of the different divisions, and the harvest seasons which permit the summer produce of one portion of the empire to supply the winter requirements of its other markets, and conversely.

The empire contains or is bounded by some of the highest mountains, the greatest lakes, and the most important rivers of the world. Its climates may be said to include all the known climates of the world; its soils are no less various. In the prairies of central Canada it possesses some of the most valuable wheat-producing land; in the grass lands of the interior of Australia the best pasture country; and in the uplands of South Africa the most valuable gold- and diamond-bearing beds which exist.

The United Kingdom at present produces more coal than any other single country except the United States. The effect of climate throughout the empire in modifying the type of the Anglo-Saxon race has as yet received only partial attention, and conclusions regarding it are of a somewhat empiric nature. The general tendency in Canada is held to be towards somewhat smaller size, and a hardy active habit; in Australia to a tall, slight, pale development locally known as “cornstalkers,” characterized by considerable nervous and intellectual activity.

In New Zealand the type preserves almost exactly the characteristics of the British Isles. The South African, both Dutch and British, is readily recognized by an apparently sun-dried, lank and hard habit of body. In the tropical possessions of the empire, where white settlement does not take place to any considerable extent, the individual alone is affected. The type undergoes no modification. It is to be observed in reference to this interesting aspect of imperial development, that the multiplication and cheapening of channels of communication and means of travel throughout the empire will tend to modify the future accentuation of race difference, while the variety of elements in the vast area occupied should have an important, though as yet not scientifically traced, effect upon the British imperial type.

It is a matter of first importance in the geographical distribution of the empire that the five principal divisions, the United Kingdom, South Africa, India, Australia and Canada are separated from each other by the three great oceans of the world. The distance as usually calculated in nautical miles: from an English Divisions.port to the Cape of Good Hope is 5840 m.; from the Cape of Good Hope to Bombay is 4610; from Bombay to Melbourne is 5630; from Melbourne to Auckland is 1830; from Auckland to Vancouver is 6210; from Halifax to Liverpool is 2744. From a British port direct to Bombay by way of the Mediterranean it is 6272; from a British port by the same route to Sydney 11,548 m.

These great distances have necessitated the acquisition of intermediate ports suitable for coaling stations on the trade routes, and have determined the position of many of the lesser crown colonies which are held simply for military and commercial purposes. Such are the Bermudas, Gibraltar, Malta, Aden, Ceylon, the Straits Settlements, Labuan, Hong-Kong, which complete the chain of connexion on the eastern route, and such on other routes are the lesser West African stations, Ascension, St. Helena, the Mauritius and Seychelles, the Falklands, Tristan da Cunha, and the groups of the western Pacific. Other annexations of the British empire have been rocky islets of the northern Pacific required for the purpose of telegraph stations in connexion with an all-British cable.

For purposes of political administration the empire falls into the three sections of the United Kingdom of Great Britain and Ireland, with the dependencies of the Channel Islands and the Isle of Man; the Indian empire, consisting of British India and the feudatory native states; and the colonial empire, comprising all other colonies and dependencies.

In the Indian Ocean there are, besides the colonies already mentioned, Rodriguez, the Chagos Islands, St Brandon Islands, Amirante Islands, Aldabra, Kuria Muria Islands, Maldive Islands and some other small groups.

In certain dependencies the sovereignty of Great Britain is not absolute. The island of Cyprus is nominally still part of the Turkish empire, but in 1878 was handed over to Great Britain for occupation and administration; Great Britain now making to the Porte on account of the island an annual payment of £5000. The administration is in the hands of an official styled high commissioner, who is invested with the powers usually conferred on a colonial governor. In Zanzibar and other regions of equatorial Africa the native rulers retain considerable powers; in the Far East certain areas are held on lease from China.

Egypt, without forming part of the British empire, came under the military occupation of Great Britain in 1882. "By right of conquest" Great Britain subsequently claimed a share in the administration of the former Sudan provinces of Egypt, and an agreement of the 19th of January 1899 established the joint sovereignty of Great Britain and Egypt over what is now known as the Anglo-Egyptian Sudan.

The Indian section of the empire was acquired during the 17th-19th centuries under a royal charter granted to the East India Company by Queen Elizabeth in 1600. It was transferred to the imperial government in 1858, and Queen Victoria was proclaimed empress under the Royal Titles Act in 1877. The following list gives the dates and method of acquisition of the centres of the main divisions of the Indian empire. They have, in most instances, grown by general process of extension to their present dimensions.

In addition to these there are British tracts known as the Upper Burma frontier and the Burma frontier. There is also a sphere of British influence in the border of Afghanistan. The state of Nepal, though independent as regards its internal administration, has been since the campaign of 1814-15 in close relations with Great Britain. It is bound to receive a British resident, and its political relations with other states are controlled by the government of India. All these native states have come into relative dependency upon Great Britain as a result of conquest or of treaty consequent upon the annexation of the neighbouring provinces. The settlement of Aden, with its dependencies of Perim and Sokotra Island, forms part of the government of Bombay.