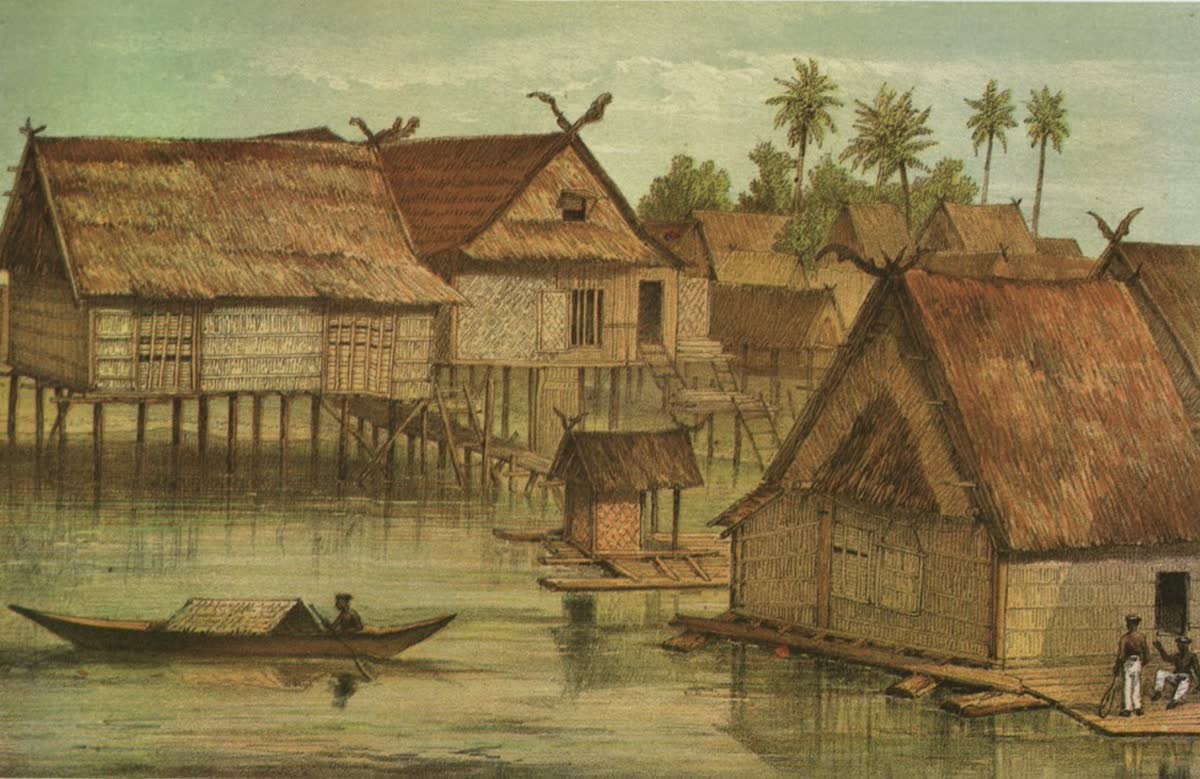 Politically Borneo is divided into four portions: (1) British North Borneo, the territory exploited and administered by the Chartered British North Borneo Company, to which a separate section of this article is devoted; (2) Brunei, a Malayan sultanate under British protection; (3) Sarawak, the large territory ruled by raja Brooke, and under British protection in so far as its foreign relations are concerned; and (4) Dutch Borneo, which comprises the remainder and by far the largest and most valuable portion of the island.

As far as is known, Borneo never formed a political unity, and even its geographical unity as an island is a fact unappreciated by the vast majority of its native inhabitants. The name of Kalamantan has been given by some Europeans (on what original authority it is not possible now to ascertain) as the native name for the island of Borneo considered as a whole; but it is safe to aver that among the natives of the island itself Borneo has never borne any general designation. To this day, among the natives of the Malayan Archipelago, men speak of going to Pontianak, to Sambas or to Brunei, as the case may be, but make use of no term which recognizes that these localities are part of a single whole.

The only archaeological remains are a few Hindu temples, and it is probable that the early settlement of the south-eastern portion of the island by Hindus dates from some time during the first six centuries of our era. There exist, however, no data, not even any trustworthy tradition, from which to reconstruct the early history of Borneo. Borneo began to be known to Europeans after the fall of Malacca in 1511, when Alphonso d'Albuquerque despatched Antonio d'Abreu with three ships in search of the Molucca or Spice Islands with instructions to establish friendly relations with all the native states that he might encounter on his way. D'Abreu, sailing in a south-easterly direction from the Straits of Malacca, skirted the southern coast of Borneo and laid up his ships at Amboyna, a small island near the south-western extremity of Ceram.

He returned to Malacca in 1514, leaving one of his captains, Francisco Serrano, at Ternate, where Magellan's followers found him in 1521. After Magellan's death, his comrades sailed from the Moluccas across the Celebes into the Sulu Sea, and were the first white men who are known to have visited Brunei on the north-west coast of Borneo, where they arrived in 1522. Pigafetta gives an interesting account of the place and of the reception of the adventurers by the sultan. The Molucca Islands being, at that time, the principal objective of European traders, and the route followed by Magellan's ships being frequently used, Borneo was often touched at during the remainder of the 16th century, and trade relations with Brunei were successfully established by the Portuguese. In 1573 the Spaniards tried somewhat unsuccessfully to obtain a share of this commerce, but it was not until 1580, when a dethroned sultan appealed to them for assistance and by their agency was restored to his own, that they attained their object.

Thereafter the Spaniards maintained a fitful intercourse with Brunei, varied by not infrequent hostilities, and in 1645 a punitive expedition on a larger scale than heretofore was sent to chastise Brunei for persistent acts of piracy. No attempt at annexation followed upon this action, commerce rather than territory being at this period the prime object of both the Spaniards and the Portuguese, whose influence upon the natives was accordingly proportionately small. The only effort at proselytizing of which we have record came to an untimely end in the death of the Theatine monk, Antonio Ventimiglia, who had been its originator. Meanwhile the Dutch and British East India Companies had been formed, had destroyed the monopoly so long enjoyed by the Portuguese, and to a less extent the Spaniards, in the trade of the Malayan Archipelago, and had gained a footing in Borneo. The establishment of Dutch trading-posts on the west coast of Borneo dates from 1604, nine years after the first Dutch fleet, under Houtman, sailed from the Texel to dispute with the Portuguese the possession of the Eastern trade, and in 1608 Samuel Blommaert was appointed Dutch resident, or head factor, in Landak and Sukedana.

The first appearance of the British in Borneo dates from 1609, and by 1698 they had an important settlement at Banjermasin, whence they were subsequently expelled by the influence of the Dutch, who about 1733 obtained from the sultan a trading monopoly. The Dutch, in fact, speedily became the predominant European race throughout the Malay Archipelago, defeating the British by superior energy and enterprise, and the trading-posts all along the western and southern coasts of Borneo were presently their exclusive possessions, the sultan of Bantam, who was the overlord of these districts, ceding his rights to the Dutch. The British meanwhile had turned their attention to the north of the island, over which the sultan of Sulu exercised the rights of suzerain, and from him, in 1759, Alexander Dalrymple obtained possession of the island of Balambangan, and the whole of the north-eastern promontory. A military post was established, but it was destroyed in 1775 by the natives under the dâto', or vassal chiefs, who resented the cession of their territory. This mishap rendered a treaty, which had been concluded in 1774 with the sultan of Brunei, practically a dead letter, and by the end of the century British influence in Borneo was to all intents and purposes at an end.

The Dutch also mismanaged their affairs in Borneo and suffered from a series of misfortunes which led Marshal Daendels in 1809 to order the abandonment of all their posts. The natives of the coasts of Borneo, assisted and stimulated by immigrants from the neighbouring islands to the north, devoted themselves more and more to organized piracy, and putting to sea in great fleets manned by two and three thousand men on cruises that lasted for two and even three years, they terrorized the neighbouring seas and rendered the trade of civilized nations almost impossible for a prolonged period. During the occupation of Java by the British an embassy was despatched to Sir Stamford Raffles by the sultan of Banjermasin asking for assistance, and in 1811 Alexander Hare was despatched thither as commissioner and resident.

He not only obtained for his government an advantageous treaty, but secured for himself a grant of a district which he proceeded to colonize and cultivate. About the same time a British expedition was also sent against Sambas and a post established at Pontianak. On the restoration of Java to the Dutch in 1816, all these arrangements were cancelled, and the Dutch government was left in undisputed possession of the field. An energetic policy was soon after adopted, and about half the kingdom of Banjermasin was surrendered to the Dutch by its sultan in 1823, further concessions being made two years later. Meanwhile, George Müller, while exploring the east coast, obtained from the sultan of Kutei an acknowledgment of Dutch authority, a concession speedily repented by its donor, since the enterprising traveller was shortly afterwards killed.

The outbreak of war in Java caused Borneo to be more or less neglected by the Dutch for a considerable period, and no effective check was imposed upon the natives with a view to stopping piracy, which was annually becoming more and more unendurable. On the rise of Singapore direct trade had been established with Sarawak and Brunei, and it became a matter of moment to British merchants that this traffic should be safe. In 1838 Sir James Brooke, an Englishman, whose attention had been turned to the state of affairs in the Eastern Archipelago, set out for Borneo, determined, if possible, to remedy the evil. By 1841 he had obtained from the sultan of Brunei the grant of supreme authority over Sarawak, in which state, on the sultan's behalf, he had waged a successful war, and before many years had elapsed he had, with the aid of the British government, succeeded in suppressing piracy (see Brooke, Sir James; and Sarawak). In 1847 the sultan of Brunei agreed to make no cession of territory to any nation or individual without the consent of Great Britain.

Since then more and more territory has been ceded by the sultans of Brunei to the raja of Sarawak and to British North Borneo, and to-day the merest remnant of his once extensive state is left within the jurisdiction of the sultan. The treaty in 1847 put an end once for all to the hopes which the Dutch had cherished of including the whole island in their dominions, but it served also to stimulate their efforts to consolidate their power within the sphere already subjected to their influence. Gunong Tebur, Tanjong, and Bulungan had made nominal submission to them in 1834, and in 1844 the sultan of Kutei acknowledged their protectorate, a treaty of a similar character being concluded about the same time with Pasir. The boundaries of British and Dutch Borneo were finally defined by a treaty concluded on the 20th of June 1891. In spite of this, however, large areas in the interior, both in Dutch Borneo and in the territory owned by the British North Borneo Company, are still only nominally under European control, and have experienced few direct effects of European administration.