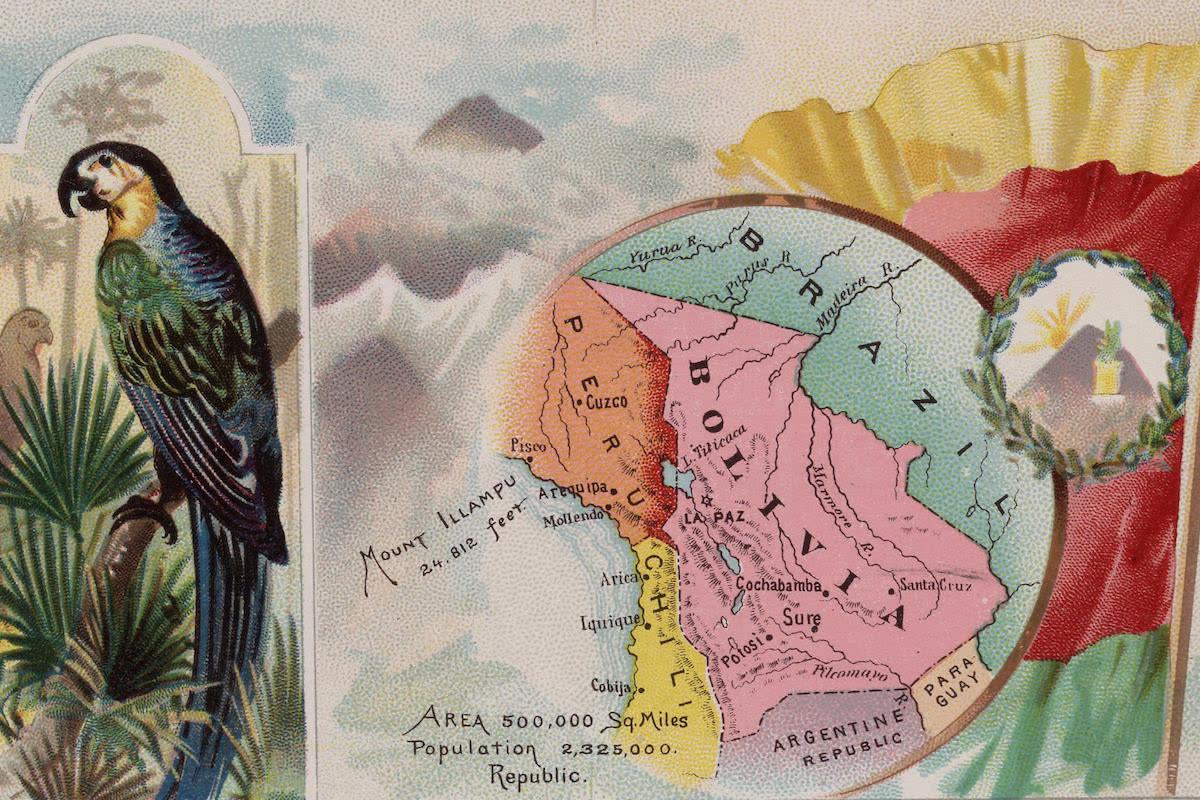 Bolivia is a republic on the west side of South America, having Brazil on the north, Brazil and Paraguay on the east, the Argentine Republic on the south and Chile on the west. Its area is 708,195 square miles, and its population is estimated at 2,267,935. It is eleven times as large as Illinois, and its population is much less than that of Chicago.

Bolivia came under Spanish rule in 1538; settlement began in 1578. Independence was declared in 1825 and the state was named in honor of the great liberator, Simon Bolivar. Its later history has been marked by insurrection and war. A war with Chile in 1879-83, although she was allied with Peru, ended in the loss of her coast district, including her rich deposits of nitrates. Her boundary disputes with Brazil and Peru were settled 1111903-04. The constitution of the republic was adopted in 1880.

Surface. The western part of Bolivia is mountainous, containing some of the highest peaks of the Andean range. Among these are Illampu 22,500 feet, Illimani 22,-500 feet. On the last named is Lake Illimani at an altitude of 15,950 feet above the sea. In this region is the lofty plateau of Oruro, with an average elevation of 13,000 feet, a length of 500 miles and a width of 100 miles. In the northern part are rich tropical valleys. The eastern section is level and heavily timbered. The great Lake Titicaca on the western border, with an area of 3,200 square miles and a depth of 120 fathoms, makes the northern plateau fertile. One of the islands in this lake was the home of the Incas or early rulers of Peru.

Rivers and Railways. The rivers of Bolivia feed the Amazon and La Plata. The Jurna and the Purus flow from Peru through Bolivia into Brazil on their way to the Amazon. The most important rivers of Bolivia are the Bern and the Mamon, which with their tributaries drain the eastern section of the country and at the Brazilian boundary join to form the Madeira. Bolivia is poorly supplied with railways. A line runs from La Paz, the capital, west 56 miles to Ynaquai on Lake Titicaca, and an extension to Puno, Peru, which will give connection with the Peruvian port of Utollendo is projected. There is a railway from Oruro southwest 303 miles to O Hague, where connection is made with the Chilean railway to the port of Antofagasta.

Climate and Resources. Although lying entirely within the tropics, the varied elevation results in a wide range of climate and production, from the cold regions over 11,000 feet high, where crops are scant, through the temperate regions in the upper portions of the descending valley, which grow large fields of grain, to the rich plains under 5,000 set, which abound in all the wealth of tropical vegetation, including cotton, coffee, rice, cocoa, pineapples, bananas, tobacco and cinchona. Varieties of animals are found, among them the guanaco, llama, alapaca, jaguar, tapir, etc. In Bolivia, June, July and August are the winter months, December, January and February the summer months. The wet season extends from December to May.

Minerals. The mines of Bolivia have long been famous, especially those of silver, which yield annually about $10,000,000 and have yielded up to the present time over $3,000,-000,000. Gold, copper and tin are mined to some extent. But while the mineral resources of Bolivia are exceedingly rich, including silver, gold, tin, copper ,bismuth, iron ore, lead, marble, asphaltum, nitrate, anthracite coal and salt, yet the development of these resources has been greatly hindered by lack of transportation facilities. The decline in the price of silver, with the high cost of transportation, has led to the abandonment of many of the less productive mines. The manufactures of Bolivia are unimportant; no goods are made for export.

Cities. The chief cities of Bolivia are La Paz, the capital and the most important commercial city, population 78,856; Cocha-bamba, population 24,512; Potosi, population 23,450; Sucre, population 23,416; Santa Cruz, population 20,535; Oruro, population 20,670; Huanchaca, population 10,000. v Government. The form of government is much like that of the United States, with a president, two vice-presidents, a cabinet and two houses of Congress. The presidential term of four years is rarely observed, and for some years the history of Bolivia has been a record of military insurrections, the supreme power being held by successful generals. There are eight departments and one territory, the government of each being under national control.