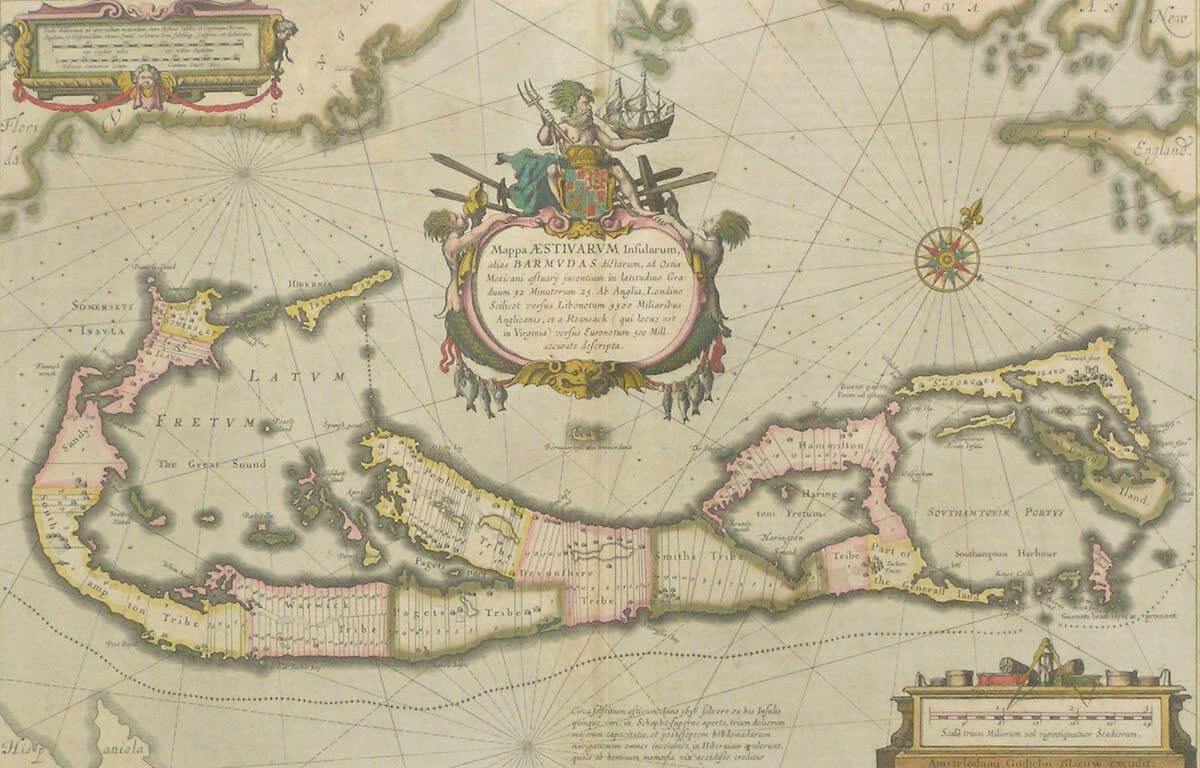 Bermuda or the Bermudas are a group of islands in the Atlantic Ocean, forming a British colony. The discovery of the Bermudas resulted from the shipwreck of Juan Bermudez, a Spaniard (whose name they now bear), when on a voyage from Spain to Cuba with a cargo of hogs, early in the 16th century. Henry May, an Englishman, suffered the same fate in 1593; and lastly, Sir George Somers shared the destiny of the two preceding navigators in 1609.

Sir George, from whom the islands took the alternative name of Somers, was the first who established a settlement upon them, but he died before he had fully accomplished his design. In 1612 the Bermudas were granted to an offshoot of the Virginia Company, which consisted of 120 persons, 60 of whom, under the command of Henry More, proceeded to the islands. The first source of colonial wealth was the growing of tobacco, but the curing industry ceased early in the 18th century. In 1726 Bishop George Berkeley chose the Bermudas as the seat of his projected missionary establishment. The first newspaper, the Bermuda Gazette, was published in 1784.

The largest of the islands is Great Bermuda, or the Main Island, 14 m. long and about a mile in average width, enclosing on the east Harrington or Little Sound, and on the west the Great Sound, which is thickly studded with islets, and protected on the north by the islands of Watford, Boaz, Ireland and Somerset. The remaining members of the group, St George, Paget, Smith, St David, Cooper, Nonsuch, &c., lie N.E. of the Main Island, and form a semicircle round Castle Harbour. The fringing islands which encircle the islands, especially on the north and west, leave a few deep passages wide enough to admit the largest vessels.

The Bermudas consist of aeolian limestones (cf. Bahamas) which in some of the larger islands form irregular hills attaining a height of some 200-250 ft. These limestones are composed chiefly of comminuted shells drifted and deposited by the wind, and they are very irregularly stratified, as is usually the case with wind-blown deposits. Where fresh the rock is soft, but where it has been exposed to the action of the sea it is covered by a hard crust and often loses all trace of stratification. The surface is frequently irregularly honeycombed. Even the reefs are not wholly formed of coral.

They are ridges of aeolian limestone plastered over by a thin layer of corals and other calcareous organisms. The very remarkable "serpuline atolls" are covered by a solid crust made of the convoluted tubes of serpulae and Vermetus, together with barnacles, mussels, nullipores, corallines and some true incrusting corals. They probably rest upon a foundation of aeolian rock. The Bermudas were formerly much more extensive than at present, and they may possibly stand upon the summit of a hidden volcano. There are evidences of small oscillations of levels, but no proofs of great elevation or depression.

The surface soil is a curious kind of red earth, which is also found in ochre-like strata throughout the limestone. It is generally mixed with vegetable matter and coral sand. There is a total want of streams and wells of fresh water, and the inhabitants are dependent on the rain, which they collect and preserve in tanks. The climate is mild and healthy, although serious epidemics of yellow fever and typhus have occurred. The maximum reading of the thermometer is about 87° F. and its minimum 49°, the mean annual temperature being 70°. The islands attract a large number of visitors annually from America. Vegetation is very rapid, and the soil is clad in a mantle of almost perpetual green. The principal kind of tree is the so-called "Bermudas cedar," really a species of juniper, which furnishes timber for small vessels. The shores are fringed with the mangrove; the prickly pear grows luxuriantly in the most barren districts; and wherever the ground is left to itself the sage bush springs up profusely.

The citron, sour orange, lemon and lime grow wild; but the apple and peach do not come to perfection. The loquat, an introduction from China, thrives admirably. The mild climate assists the growth of esculent plants and roots; and a considerable trade is carried on with New York, principally in onions, early potatoes, tomatoes, and beetroot, together with lily bulbs, cut flowers and some arrowroot. Medicinal plants, as the castor-oil plant and aloe, come to perfection without culture; and coffee, indigo, cotton and tobacco are also of spontaneous growth. Few oxen or sheep are reared in the colony, meat, as well as bread and most vegetables, being imported from America. The indigenous mammals are very few, and the only reptiles are a small lizard and the green turtle. Birds, however, especially aquatic species, are very numerous. Insects are comparatively few, but ants swarm destructively in the heat of the year. Fish are plentiful round the coasts, and the whale-fishery was once an important industry, but the fisheries as a whole have not been developed.

There are two towns in the Bermudas: St George, on the island of that name, founded in 1794 and incorporated in 1797; and Hamilton, on the Main Island, founded in 1790 and incorporated in 1793. St George was the capital till the senate and courts of justice were removed by Sir James Cockburn to Hamilton, which being centrally situated, is more convenient. Hamilton, which is situated on the inner part of the Great Sound, had a population in 1901 of 2246, that of St George being 985. In Ireland Island is situated the royal dockyard and naval establishment. The harbor of St George's has space enough to accommodate a vast fleet; yet, till deepened by blasting, the entrance was so narrow as to render it almost useless. The Bermudas became an important naval and coaling station in 1869, when a large iron dry dock was towed across the Atlantic and placed in a secure position in St George, while, owing to their important strategic position in mid-Atlantic, the British government maintains a strong garrison.

The Bermudas are a British crown colony, with a governor resident at Hamilton, who is assisted by an executive council of 6 members appointed by the crown, a legislative council of 9 similarly appointed, and a representative assembly of 36 members, of whom four are returned by each of nine parishes. The currency of the colony, which had formerly twelve shillings to the pound sterling, was assimilated to that of England in 1842. The English language is universal. The colony is ecclesiastically attached to the bishopric of Newfoundland. In 1847 an educational board was established, and there are numerous schools; attendance is compulsory, but none of the schools is free. Government scholarships enable youths to be educated for competition in the Rhodes scholarships to Oxford University. The revenue of the islands shows a fairly regular increase during the last years of the 19th century and the first of the 20th, as from £37,830 in 1895 to £63,457 in 1904; expenditure is normally rather less than revenue. In the year last named imports were valued at £589,979 and exports at £130,305, the annual averages since 1895 being about £426,300 and £112,500 respectively. The population shows a steady increase, as from 13,948 in 1881 to 17,535 in 1901; 6383 were whites and 11,152 coloured in the latter year.