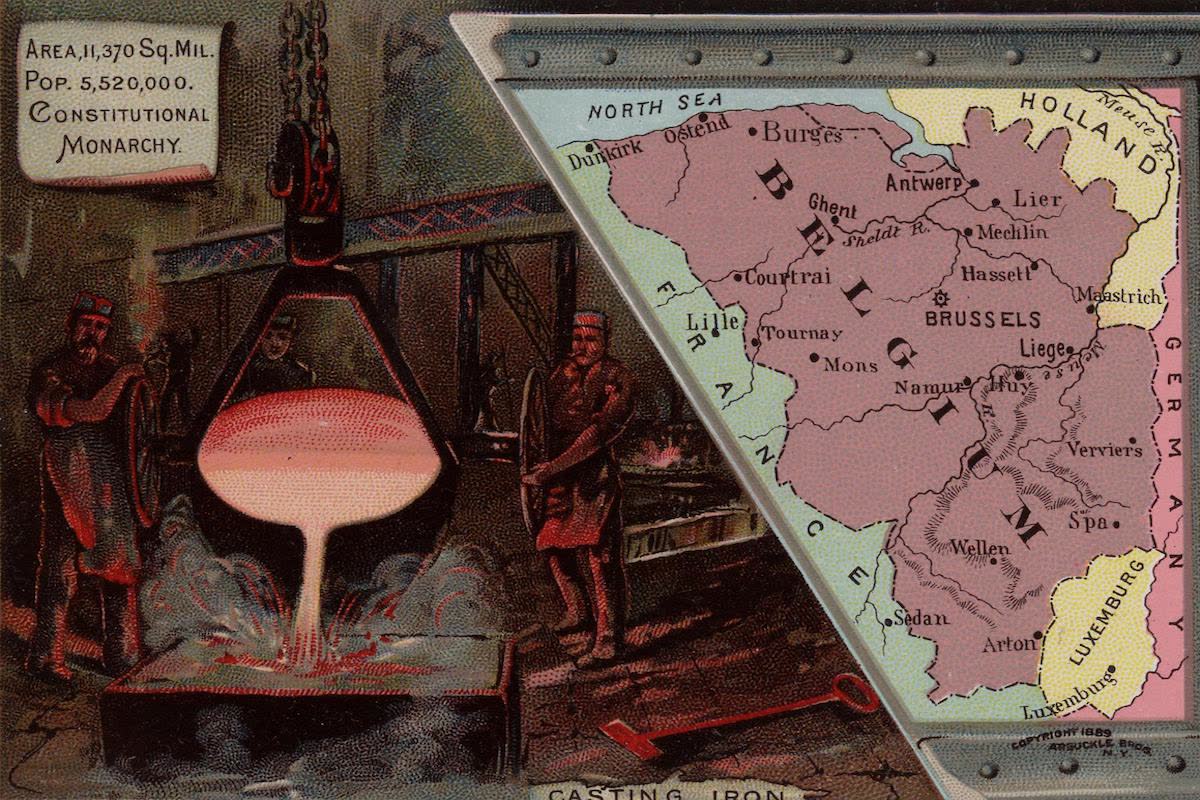 Belgium (bel'j%~um), one of the smaller European states, lying between France and the Netherlands, tne North Sea and Rhenish Prussia. It is divided into nine provinces, and comprises 11,373 square miles, less than one third the size of Indiana. It has a population of 7,160,547, or 629 persons to the square mile, so that Belgium is the most densely populated country in Europe.

Dutch, Germans, French, Flemings and Walloons are found among its population. There are twenty-six towns with over 20,000 inhabitants, of which the capital, Brussels (population, 612,401), Antwerp (297,311), Ghent (163,059) and Liege (122,207) are the largest. Most of the country is low, and part of it is protected from the sea by dykes. The Scheldt and the Meuse, with their branches, and a system of canals afford abundant water supply.

The farming is like gardening on a large scale, so carefully is every inch of soil cultivated. All kinds of grain are raised. The land is rich in minerals, including coal, iron, lead, copper, zinc and marble. The chief manufactures are linen, woolen, cotton and silk goods, lace, leather and metals, besides sugar-refineries and distilleries, steel works, blast and puddling furnaces.

For many years Belgium led Europe in commerce, and her foreign trade is still very large. The people are mainly Roman Catholic. Culture has been hindered somewhat by the many different dialects in use; but there are many scientific and literary societies and museums, public libraries, music and art schools and universities at Ghent, Louvain, Liege and Brussels.

Attached to the universities are schools of engineering, arts, manufactures, mining, etc., with a combined attendance in 1909-10 of 2,407 students. There are also 85 schools of design, with nearly 15,000 students, several royal conservatories and other schools of music with 20,192 students, beside the Royal Academy of Fine Arts at Antwerp, with 850 students in 1909. Belgium numbers Rubens, Teniers and Van Dyck among its great artists.

The standing army is fixed at 42,800 in time of peace, with 180,000 on a war-footing. Belgium has no navy. The government ife a constitutional monarchy, in which the succession is hereditary There are two houses, much like those in the United States —a senate (having no members), elected for eight years, and a chamber of representatives (present number being 166), elected for four years.

The history of Belgium as a separate kingdom dates from the year 1831, when it parted from Holland-. Its provinces, however, have figured in history from the days of the Caesars. They often served as the battle-ground of Europe, and the battle of Waterloo was fought on the soil of Brabant, a province of this kingdom. When Belgium became independent, Prince Leopold of Saxe-Coburg was elected king, and in 1865 his son, the present monarch, succeeded as Leopold II.

War with Holland has several times threatened, and riots of workingmen and socialists have caused disturbance; but the country is steadily growing in prosperity. The revenue estimated for 1911 amounted to 658,-724,000 francs, while the expenditure, as per budget, was a fraction over 658,000,000 francs. The imports for 1910 showed a total of over 6,500,000,000 francs.

The exports from the United States to Belgium, consisting of wheat, cotton, oil-cake, mineral oil, lard and tobacco, were valued in 1911 at $45,016,622, while the imports from Belgium into the United States, consisting of glass-work, rubber goods, iron and steel work and jewelry, had a gross value of $37,084,743. The railways of Belgium in 1911, including the lines operated by the state and those operated by private companies, were 2,915 miles in length.