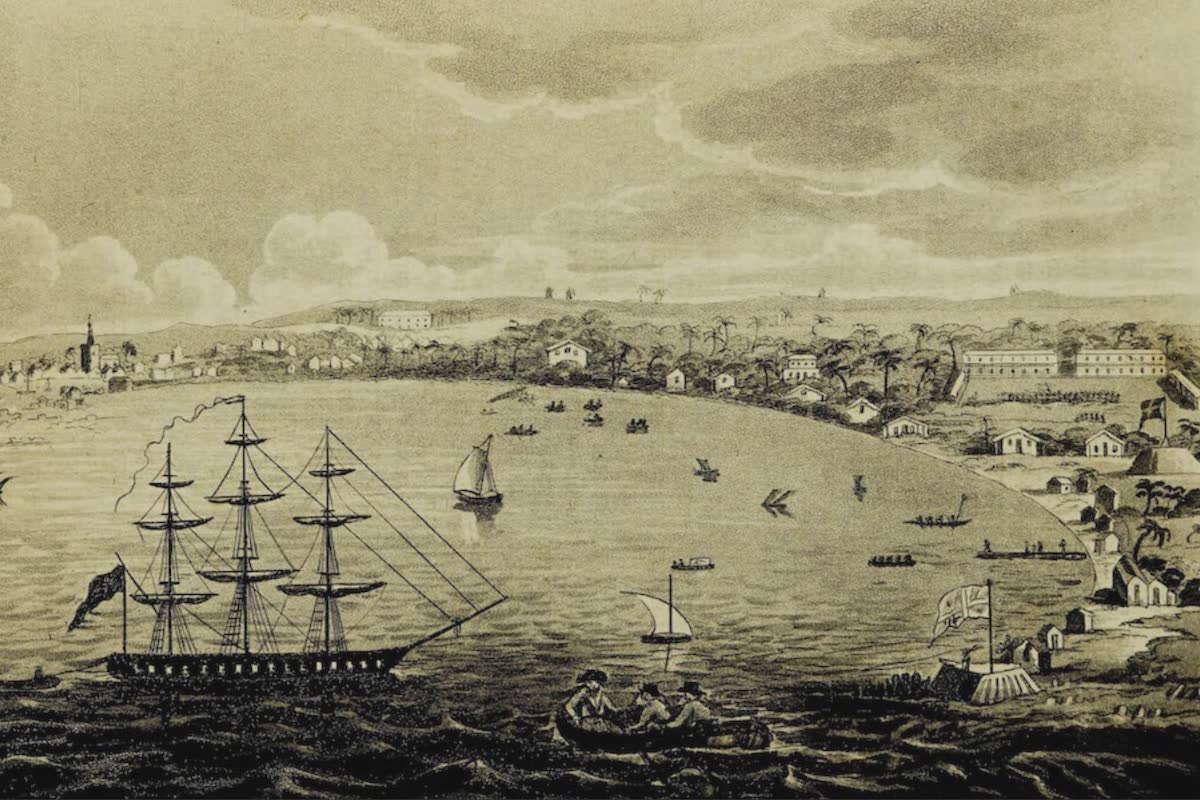 Barbados, or Barbadoes, an island in the British West Indies. It lies 78 m. E. of St Vincent, in 13° 4' N. and 59° 37' W.; is 21 m. long, 14½ m. at its broadest, and 166 sq. m. (106,470 acres) in extent (roughly equalling the Isle of Wight). Its coasts are encircled with coral reefs, extending in some places 3 m. seaward. In its configuration the island is elevated but not mountainous. Near the centre is its apex, Mount Hillaby (1100 ft.), from which the land falls on all sides in a series of terraces to the sea. So gentle is the incline of the hills that in driving over the well-constructed roads the ascent is scarcely noticeable. The only natural harbor is Carlisle Bay on the south-western coast, which, however, is little better than a shallow roadstead, only accessible to light draught vessels.

The oldest rocks of Barbados, known as the Scotland series, are of shallow water origin, consisting of coarse grits, brown sandstones and sandy clays, in places saturated with petroleum and traversed by veins of manjak. They have been folded and denuded, so as to form the foundation on which rest the later beds of the island. Upon the denuded edges of the Scotland beds lies the Oceanic series. It includes chalky limestones, siliceous earths, red clay, and, at the top, a layer of mudstone composed mainly of volcanic dust.

The limestones contain Globigerina and other Foraminifera, the siliceous beds are made of Radiolaria, sponge spicules and diatoms, while the red clay closely resembles the red clay of the deepest parts of the oceans. There can be no doubt that the whole series was laid down in deep waters. The Oceanic series is generally overlaid directly, and unconformably, by coral limestones; but at Bissex Hill, at the base of the coral limestones, and resting unconformably upon the Oceanic series, there is a Globigerina marl. The Coral Limestone series lies indifferently upon the older beds. Although of no great thickness it covers six-sevenths of the island, rising in a series of steps or platforms to a height of nearly 1100 ft.

Even the Scotland series probably belongs to the Tertiary system, but owing to the want of characteristic fossils, it is impossible to determine with any degree of certainty the precise homotaxis of the several formations. Jukes-Browne and Harrison ascribe the Scotland beds to the Eocene or Oligocene period, the Oceanic series to the Miocene, the Bissex Hill marls to the Pliocene, and the coral limestones partly to the Pliocene and partly to the Pleistocene. But these correlations rest upon imperfect evidence.

Sandstone, and clays suitable for brick-making, are found in the district of Scotland, so called from a fancied resemblance to the Highlands of North Britain. The only other mineral product is manjak, a species of asphalt, also found in this district and to some extent exported.

The climate of Barbados is pleasant. The seasons are divided into wet and dry, the latter (extending from December to the end of May) being also the cold season. The temperature ranges from 70° F. to 86° F., rarely, even on the coldest days, falling below 65° F. The average annual rainfall is about 60 in., September being the wettest month. For eight months the invigorating N.E. trade winds temper the tropical heat. The absence of swamps, the porous nature of the soil, and the extent of cultivation account for the freedom of the island from miasma. Fever is unknown. The climate has a beneficial effect on pulmonary diseases, especially in their earlier stages, and is remarkable in arresting the decay of vital power consequent upon old age. Leprosy occurs amongst the negroes, and elephantiasis is so frequent as to be known as "Barbados leg."

The cultivation of sugar was first introduced in the middle of the 17th century, and owing to the cheapness of labour, the extreme fertility of the soil and the care bestowed on its cultivation, became the staple product of the island. Cotton growing has recently become of importance. The few other industries include rum distilleries and factories for chemicals, ice and tobacco. A railway 28 m. long runs from Bridgetown partly round the coast. The island is a place of call for almost all the steamships plying to and from the West Indies, and is a great centre of distribution. There is direct communication at frequent intervals with England, the United States, Canada and the other West Indian islands.

The greater part of the inhabitants belong to the Church of England, which exceeds in numbers the combined total of all other denominations. The island is the see of a bishop, who, with the clergy of all creeds, is paid by the government. The chief educational establishment is Codrington College, founded by Colonel Christopher Codrington, who in 1710 bequeathed two estates to the Society for the Propagation of the Gospel. It trains young men for holy orders and is affiliated to the university of Durham. Harrison College and The Lodge are secondary schools for boys, Queen's College for girls. There are several second grade and a large number of primary schools. The colony possesses representative institutions but not responsible government.

The crown has a veto on legislation and the home government appoints the public officials, excepting the treasurer. The island is administered by a governor, assisted by an executive council, a legislative council of 9 nominated members, and a house of assembly of 24 members elected on a limited franchise. Barbados is the headquarters of the Imperial Agricultural Department of the West Indies, to which (under Sir Daniel Morris) the island owes the development of cotton growing, &c. The majority of the population consists of negroes, passionately attached to the island, who have a well-marked physiognomy and dialect of their own, and are more intelligent than the other West Indian negroes. They outnumber the whites by 9 to 1. Barbados is one of the most densely populated areas in the world. In 1901 the numbers amounted to 195,588, or 1178 to the sq. m., and in 1906 they were 196,287. There are no crown lands nor forests.

Bridgetown (pop. 21,000), the capital, situated on the S.W. coast, is a pretty town nestling at the foot of the hills leading to the uplands of the interior. It has a cathedral, St Michael's, which also serves as a parish church. In Trafalgar Square stands the earliest monument erected to the memory of Nelson. There are a good many buildings, shops, pleasure grounds, a handsome military parade and exquisite beaches. Pilgrim, the residence of the governor, is a fine mansion about a mile from the city. Fontabelle and Hastings are fashionable suburban watering-places with good sea-bathing. Speighstown (1500) is the only other town of any size.

Opinions differ as to the derivation of the name of the island. It may be the Spanish word for the hanging branches of a vine which strike root in the ground, or the name may have been given from a species of bearded fig-tree. In the 16th-century maps the name is variously rendered St Bernardo, Bernados, Barbudoso, Barnodos and Barnodo. There are more numerous traces of the Carib Indians here than in any other of the Antilles. Barbados is thought to have been first visited by the Portuguese. Its history has some special features, showing as it does the process of peaceful colonization, for the island, acquired without conquest, has never been out of the possession of the British.

It was touched in 1605 by the British ship "Olive Blossom," whose crew, finding it uninhabited, took possession in the name of James I.; but the first actual settlement was made in 1625, at the direction of Sir William Courteen under the patent of Lord Leigh, afterwards earl of Marlborough, to whom the island had been granted by the king. Two years later, a compromise having been effected with Lord Marlborough, a grant of the island was obtained by the earl of Carlisle, whose claim was based on a grant, from the king, of all the Caribbean islands in 1624; and in 1628 Charles Wolferstone, a native of Bermuda, was appointed governor. In the same year sixty-four settlers arrived at Carlisle Bay and the present capital was founded. During the Civil War in England many Royalists sought refuge in Barbados, where, under Lord Willoughby (who had leased the island from the earl of Carlisle), they offered stout resistance to the forces of the Commonwealth.

Willoughby, however, was ultimately defeated and exiled. After the Restoration, to appease the planters, doubtful as to the title under which they held the estates which they had converted into valuable properties, the proprietary or patent interest was abolished, and the crown took over the government of the island; a duty of 4½% on all exports being imposed to satisfy the claims of the patentees. In 1684, under the governorship of Sir Richard Dutton, a census was taken, according to which the population then consisted of 20,000 whites and 46,000 slaves. The European wars of the 18th century caused much suffering, as the West Indies were the scene of numerous battles between the British and the French. During this period a portion of the 4½% duty was returned to the colony in the form of the governor's salary. In the course of the American War of Independence Barbados again experienced great hardships owing to the restrictions placed upon the importation of provisions from the American colonies, and in 1778 the distress became so acute that the British government had to send relief.

For three years after the peace of Amiens in 1802 the colony enjoyed uninterrupted calm, but in 1805 it was only saved from falling into the hands of the French by the timely arrival of Admiral Cochrane. Since that date, however, it has remained unthreatened in the possession of the British. The rupture between Great Britain and the United States in 1812 caused privateering to be resumed, the trade of the colony being thereby almost destroyed. This led to an agitation for the repeal of the 4½% duty, but it was not till 1838 that the efforts to secure this were successful. The abolition of slavery in 1834 was attended by no ill results, the slaves continuing to work for their masters as hired servants, and a period of great prosperity succeeded. The proposed confederation of the Windward Islands in 1876, however, provoked riots, which occasioned considerable loss of life and property, but secured for the people their existence as a separate colony. Hurricanes are the scourge of Barbados, those of 1780, 1831, and 1898 being so disastrous as to necessitate relief measures on the part of the home government.

There are no works available for the Barbados collection.