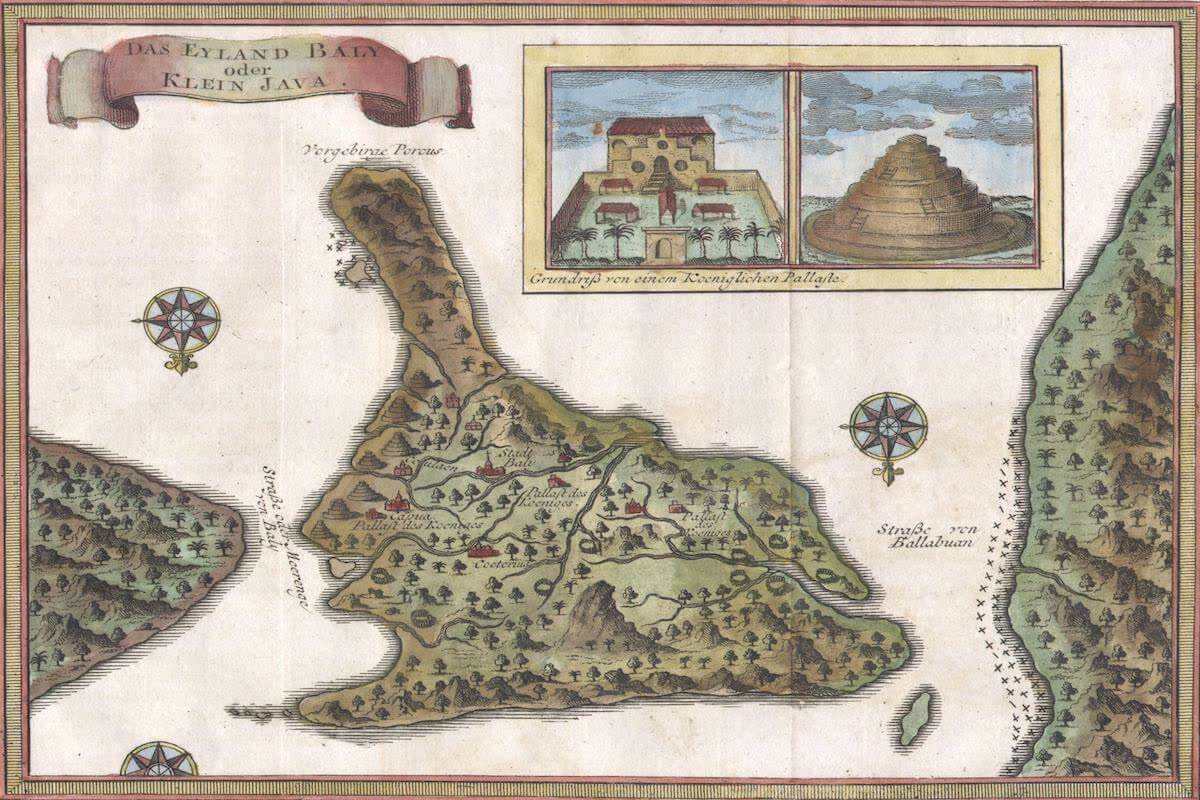 BALI, an island of the East Indies, E. of Java, from which it is separated by Bali Strait, which is shallow, and scarcely over a mile in width at its narrowest point. Bali is 93 m. in length, and its greatest breadth is 50 m. The area is 2095 sq. m. In 1882, for administrative purposes, Bali was separated from Java and combined with the island of Lombok to form the Dutch residency of Lombok and Bali.

Politically its divisions are two:—(1) the two districts, Buleleng and Jembrana, on Dutch territory; and (2) the autonomous states of Klung Lung, Bangli, Mengui, Badung and Tabanan. Buleleng, on the north-west, is the chief town. The population on Dutch territory in the whole residency in the year 1905 was 523,535. Bali belongs physically to Java; the climate and soil are the same and it has mountains of proportionate height. There are several lakes of great depth and streams well fitted for the purposes of irrigation, of which full advantage is taken by the natives.

The geological formation includes (like that of Java) three regions—the central volcanic, the southern peninsula of Tertiary limestone, and alluvial plains between the older formations. The highest volcanoes, Tabanan, Batur and Gunung Agung (Bali Beak), have respectively heights of 7545 ft., 7383 ft., and 10,497 ft., the central chain having an average altitude of 3282 ft. As regards flora and fauna Bali is associated with Java. The deep strait which separates it on the east from Lombok was taken by A. R. Wallace as representing the so-called Wallace's Line, whereby he demarcated the Asiatic from the Australian fauna.

The natives of Bali, though of the same stock as the Javanese, and resembling them in general appearance, exceed them in stature and muscular power, as well as in activity and enterprise. They are skilful agriculturists and artisans, especially in textile fabrics and the manufacture of arms. Though native rule is tyrannical and arbitrary, especially in the principalities of Badung and Tabanan, trade and industry could not flourish if insecurity of persons and property existed to any great extent. The natives have also a remedy against the aggression of their rulers in their own hands; it is called Metilas, consists in a general rising and renunciation of allegiance, and proves mostly successful.

Justice is administered from a written civil and criminal code. Slavery is abolished. Hinduism, which was once the religion of Java, but has been extinct there for four centuries, is still in vogue in the islands of Bali and Lombok, where the cruel custom of widow-burning (suttee) is still practised, and the Hindu system of the four castes, with a fifth or Pariah caste (called Chandala), adhered to. It appears partly blended with Buddhism, partly overgrown with a belief in Kalas, or evil spirits. To appease these, offerings are made to them either direct or through the mediation of the Devas (domestic or agrarian deities); and if these avail not, the Menyepi or Great Sacrifice is resorted to.

In the course of this ceremony, after the sacrifice, men rush in all directions carrying torches; the women also carry fire-brands, or knock on the houses with rice-crushers and other heavy implements, and thus the evil spirits are considered to be driven away. The Mahommedan religion occurs among the coastal population. The Balinese language belongs to the same group of the Malayan class as the Javanese, Sundanese, Madurese, &c., but is as distinct from each of these as French is from Italian. It is most nearly akin to the Sasak language spoken in Lombok and on the east coast of Bali.

The literary language has embodied many of its ingredients from the Old Javanese, as spoken in Java at the time of the fall of Majapahit (15th century), while the vulgar dialect has kept free from such admixture. Javanese influence is also traceable in the use of three varieties of speech, as in the Javanese language, according to the rank of the people addressed. The alphabet is with some modifications the same as the Javanese, but more complicated. The material universally used for writing on is the prepared leaf of the lontar palm.

The sacred literature of the Balinese is written in the ancient Javanese or Kawi language, which appears to be better understood here than it is in Java. A general decline in culture is manifest in the Balinese. Of the early history of their island the Balinese know nothing. The oldest tradition they possess refers to a time shortly after the overthrow of the Majapahit dynasty in Java, about the middle of the 15th century; but it has been supposed that there must have been Indian settlers here before the middle of the 1st century, by whom the present name, probably cognate with the Sanskrit balin, strong, was in all likelihood imposed. It was not till 1633 that the Dutch attempted to enter into alliance with the native princes, and their earliest permanent settlement at Port Badung only dates from 1845. Their influence was extended by the results of the war which they waged with the natives about 1847-49.

The only roadstead safe all the year round is Temukus on the north coast. The rivers are not navigable. Agriculture is the chief means of subsistence; rice being a crop of particular importance. Other crops grown for export are coffee, tobacco, cocoa and indigo. Gold-working, the making of arms and musical instruments, wood-carving, cotton, silk and gold thread weaving are of importance. There are numerous Arab and Chinese traders.

There are no works available for the Bali collection.