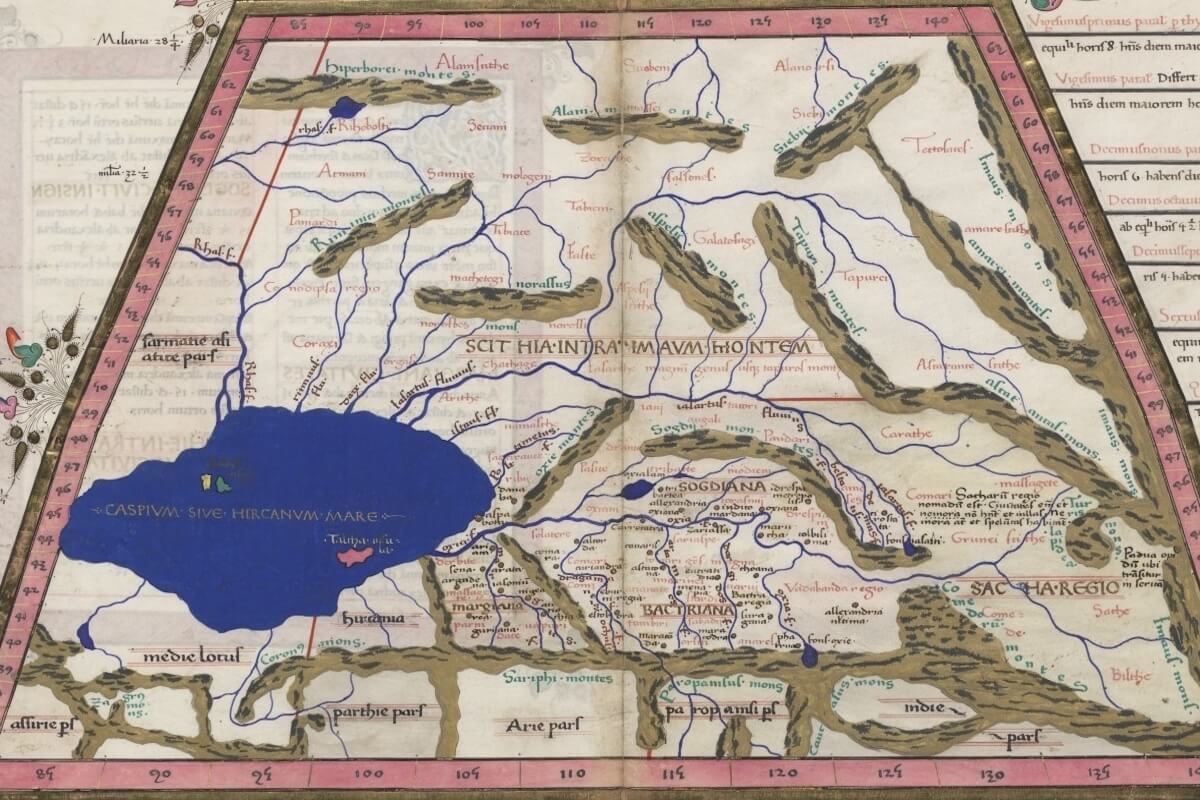 BACTRIA (Bactriana), the ancient name of the country between the range of the Hindu Kush (Paropamisus) and the Oxus (Amu Darya), with the capital Bactra (now Balkh); in the Persian inscriptions B?khtri. It is a mountainous country with a moderate climate. Water is abundant and the land is very fertile. Bactria was the home of one of the Iranian tribes (see Persia: Ancient History). Modern authors have often used the name in a wider sense, as the designation of the whole eastern part of Iran.

As there can be scarcely any doubt that it was in these regions, where the fertile soil of the mountainous country is everywhere surrounded and limited by the Turanian desert, that the prophet Zoroaster preached and gained his first adherents, and that his religion spread from here over the western parts of Iran, the sacred language in which the Avesta, the holy book of Zoroastrianism, is written, has often been called “old Bactrian.” But there is no reason for this extensive use of the name, and the term “old Bactrian” is, therefore, at present completely abandoned by scholars.

Still less foundation exists for the belief, once widely spread, that Bactria was the cradle of the Indo-European race; it was based on the supposition that the nations of Europe had immigrated from Asia, and that the Aryan languages (Indian and Iranian) stood nearest to the original language of the Indo-Europeans. It is now acknowledged by all linguists that this supposition is quite wrong, and that the Aryans probably came from Europe. The eastern part of Iran seems to have been the region where the Aryans lived as long as they formed one people, and whence they separated into Indians and Iranians.

The Iranian tradition, preserved in the Avesta and in Firdousi’s Shahnama, localizes a part of its heroes and myths in the east of Iran, and has transformed the old gods who fight with the great snake into kings of Iran who fight with the Turanians. Many modern authors have attempted to make history out of these stories, and have created an old Bactrian empire of great extent, the kings of which had won great victories over the Turanians.

But this historical aspect of the myth is of late origin: it is nothing but a reflex of the great Iranian empire founded by the Achaemenids and restored by the Sassanids. The only historical fact which we can learn from the Iranian tradition is that the contrast and the feud between the peasants of Iran and the nomads of Turan was as great in old times as it is now: it is indeed based upon the natural geographical conditions, and is therefore eternal.

But a great Bactrian empire certainly never existed; the Bactrians and their neighbours were in old times ruled by petty local kings, one of whom was Vishtaspa, the protector of Zoroaster. Ctesias in his history of the Assyrian empire (Diodor. Sic. ii. 6 ff.) narrates a war waged by Ninus and Semiram, against the king of Bactria (whom some later authors, e.g. Justin i. 1, call Zoroaster). But the whole Assyrian history of Ctesias is nothing but a fantastic fiction; from the Assyrian inscriptions we know that the Assyrians never entered the eastern parts of Iran.

Whether Bactria formed part of the Median empire, we do not know; but it was subjugated by Cyrus and from then formed one of the satrapies of the Persian empire. When Alexander had defeated Darius III., his murderer Bessus, the satrap of Bactria, tried to organize a national resistance in the east. But Bactria was conquered by Alexander without much difficulty; it was only farther in the north, beyond the Oxus, in Sogdiana, that he met with strong resistance. Bactria became a province of the Macedonian empire, and soon came under the rule of Seleucus, king of Asia (see Seleucid Dynasty and Hellenism). The Macedonians (and especially Seleucus I. and his son Antiochus I.) founded a great many Greek towns in eastern Iran, and the Greek language became for some time dominant there. The many difficulties against which the Seleucid kings had to fight and the attacks of Ptolemy II., gave to Diodotus, satrap of Bactria, the opportunity of making himself independent (about 255 B.C.) and of conquering Sogdiana. He was the founder of the Graeco-Bactrian kingdom. Diodotus and his successors were able to maintain themselves against the attacks of the Seleucids; and when Antiochus III., “the Great,” had been defeated by the Romans (190 B.C.), the Bactrian king Euthydemus and his son Demetrius crossed the Hindu Kush and began the conquest of eastern Iran and the Indus valley.

For a short time they wielded great power; a great Greek empire seemed to have arisen far in the East. But this empire was torn by internal dissensions and continual usurpations. When Demetrius advanced far into India one of his generals, Eucratides, made himself king of Bactria, and soon in every province there arose new usurpers, who proclaimed themselves kings and fought one against the other. Most of them we know only by their coins, a great many of which are found in Afghanistan and India. By these wars the dominant position of the Greeks was undermined even more quickly than would otherwise have been the case. After Demetrius and Eucratides, the kings abandoned the Attic standard of coinage and introduced a native standard; at the same time the native language came into use by the side of the Greek. On the coins struck in India, the well-known Indian alphabet (called Brahmi by the Indians, the older form of the Devanagari) is used; on the coins struck in Afghanistan and in the Punjab the Kharosh?hi alphabet, which is derived directly from the Aramaic and was in common use in the western parts of India, as is shown by one of the inscriptions of Asoka and by the recent discovery of many fragments of Indian manuscripts, written in Kharosh?hi, in eastern Turkestan (formerly this alphabet has been called Arianic or Bactrian Pali; the true name is derived from Indian sources).

The weakness of the Graeco-Bactrian kingdoms was shown by their sudden and complete overthrow. In the west the Arsacid empire had risen, and Mithradates I. and Phraates II. began to conquer some of their western districts, especially Areia (Herat). But in the north a new race appeared, Mongolian tribes, called Scythians by the Greeks, amongst which the Tochari, identical with the Yue-chi (q.v.) of the Chinese, were the most important. In 159 B.C., according to Chinese sources, they entered Sogdiana, in 139 they conquered Bactria, and during the next generation they had made an end to the Greek rule in eastern Iran. Only in India the Greek conquerors (Menander, Apollodotus) maintained themselves some time longer. But in the middle of the 1st century B.C. the whole of eastern Iran and western India belonged to the great “Indo-Scythian” empire.

The ruling dynasty had the name Kushan (Kushana), by which they are called on their coins and in the Persian sources. The most famous of these kings is Kanishka (ca. 123–153), the great protector of Buddhism. The principal seat of the Tochari and the Kushan dynasty seems to have been Bactria; but they always maintained the eastern parts of modern Afghanistan and Baluchistan, while the western regions (Areia, i.e. Herat, Seistan and part of the Helmund valley) were conquered by the Arsacids. In the 3rd century the Kushan dynasty began to decay; about A.D. 320 the Gupta empire was founded in India. Thus the Kushanas were reduced to eastern Iran, where they had to fight against the Sassanids. In the 5th century a new people came from the east, the Ephthalites (q.v.) or “white Huns,” who subjected Bactria (about 450); and they were followed by the Turks, who first appear in history about A.D. 560 and subjugated the country north of the Oxus. Most of the small principalities of the Tochari or Kushan became subject to them. But when the Sassanian empire was overthrown by the Arabs, the conquerors immediately advanced eastwards, and in a few years Bactria and the whole Iran to the banks of the Jaxartes had submitted to the rule of the caliph and of Islam.