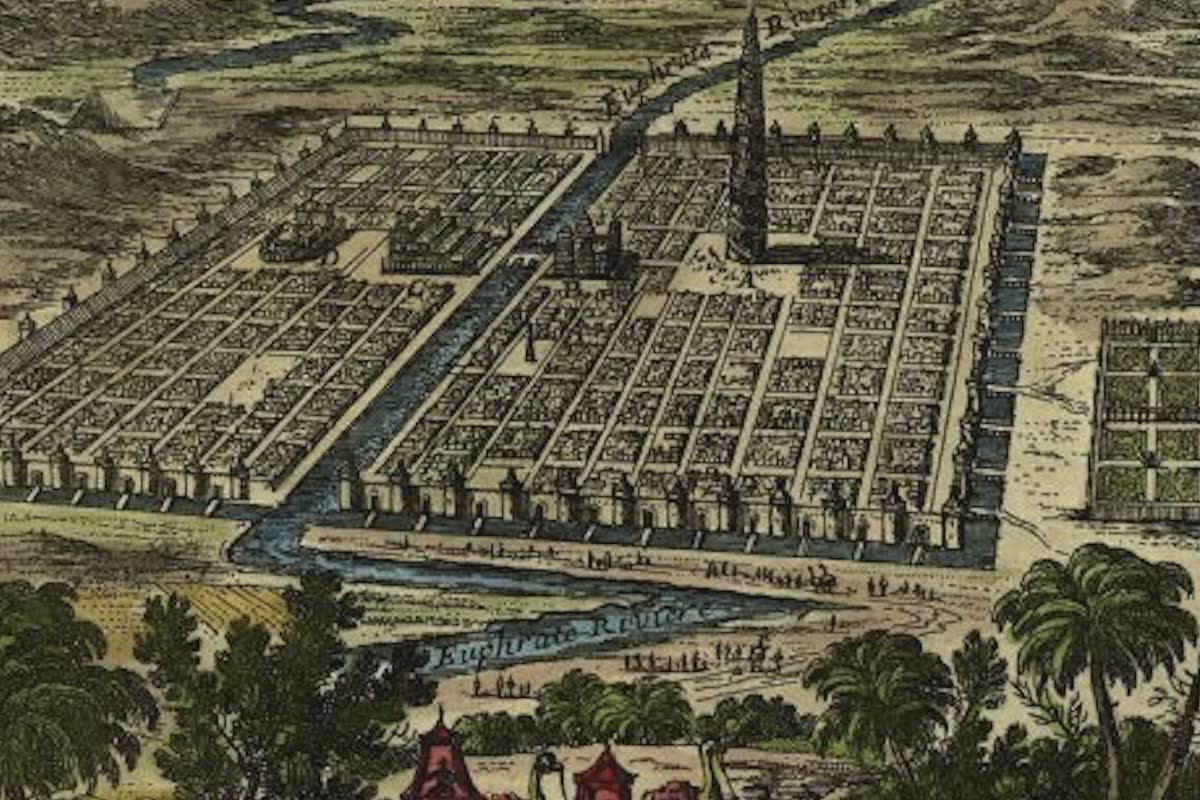 Babylon was a major ancient city in Mesopotamia from the 18th to 6th centuries BC. The city was built on the Euphrates river and divided in equal parts along its left and right banks, with steep embankments to contain the river's seasonal floods.

Babylon was originally a small Akkadian town dating from the period of the Akkadian Empire c.?2300 BC. The town became part of a small independent city-state with the rise of the First Babylonian dynasty in the 19th century BC and later saw the rise of Hammurabi and the famous Nebuchadnezzar.

Believed to be the site of the fabled Hanging Gardens and many other ancient wonders, the eighteenth century saw an increasing flow of travelers to Babylon, including Carsten Niebuhr and Pierre-Joseph de Beauchamp, as well as measurements of its latitude. Beauchamp's memoir, published in English translation in 1792, provoked the British East India Company to direct its agents in Baghdad and Basra to acquire Mesopotamian relics for shipment to London.

Claudius Rich, working for the East India Company in Baghdad, excavated Babylon in 1811–12 and again in 1817. Robert Mignan explored the site briefly in 1827. William Loftus visited there in 1849. Austen Henry Layard made some soundings during a brief visit in 1850 before abandoning the site. Fulgence Fresnel and Julius Oppert heavily excavated Babylon from 1852 to 1854. However, many of the fruits of their work were lost when a raft containing over forty crates of artifacts sank into the Tigris river.

Henry Rawlinson (who later became, in 1889, Sir Henry Rawlinson) and George Smith worked there briefly in 1854. The next excavation was conducted by Hormuzd Rassam on behalf of the British Museum. Work began in 1879, continuing until 1882, and was prompted by widespread looting of the site. Using industrial scale digging in search of artifacts, Rassam recovered a large quantity of cuneiform tablets and other finds. The zealous excavation methods, common at the time, caused significant damage to the archaeological context. Many tablets had appeared on the market in 1876 before Rassam's excavation began.

A team from the German Oriental Society led by Robert Koldewey conducted the first scientific archaeological excavations at Babylon. The work was conducted daily from 1899 until 1917. Primary efforts of the dig involved the temple of Marduk and the processional way leading up to it, as well as the city wall. Artifacts including pieces of the Ishtar Gate and hundreds of recovered tablets were sent back to Germany, where Koldewey's colleague Walter Andrae reconstructed them into displays at Vorderasiatisches Museum Berlin. The German archaeologists fled before oncoming British troops in 1917 and again many objects went missing in the following years.

Further work by the German Archaeological Institute was conducted by Heinrich J. Lenzen in 1956 and Hansjörg Schmid in 1962. Lenzen's work dealt primarily with the Hellenistic theatre, and Schmid focused on the temple ziggurat Etemenanki. The site was excavated in 1974 on behalf of the Turin Centre for Archaeological Research and Excavations in the Middle East and Asia and the Iraqi-Italian Institute of Archaeological Sciences. The focus was on clearing up issues raised by re-examination of the old German data. Additional work in 1987–1989 concentrated on the area surrounding the Ishara and Ninurta temples in the Shu-Anna city-quarter of Babylon.

During the restoration efforts in Babylon, the Iraqi State Organization for Antiquities and Heritage conducted extensive research, excavation and clearing, but wider publication of these archaeological activities has been limited. Indeed, most of the known tablets from all modern excavation remain unpublished.

There are no works available for the Babylon collection.