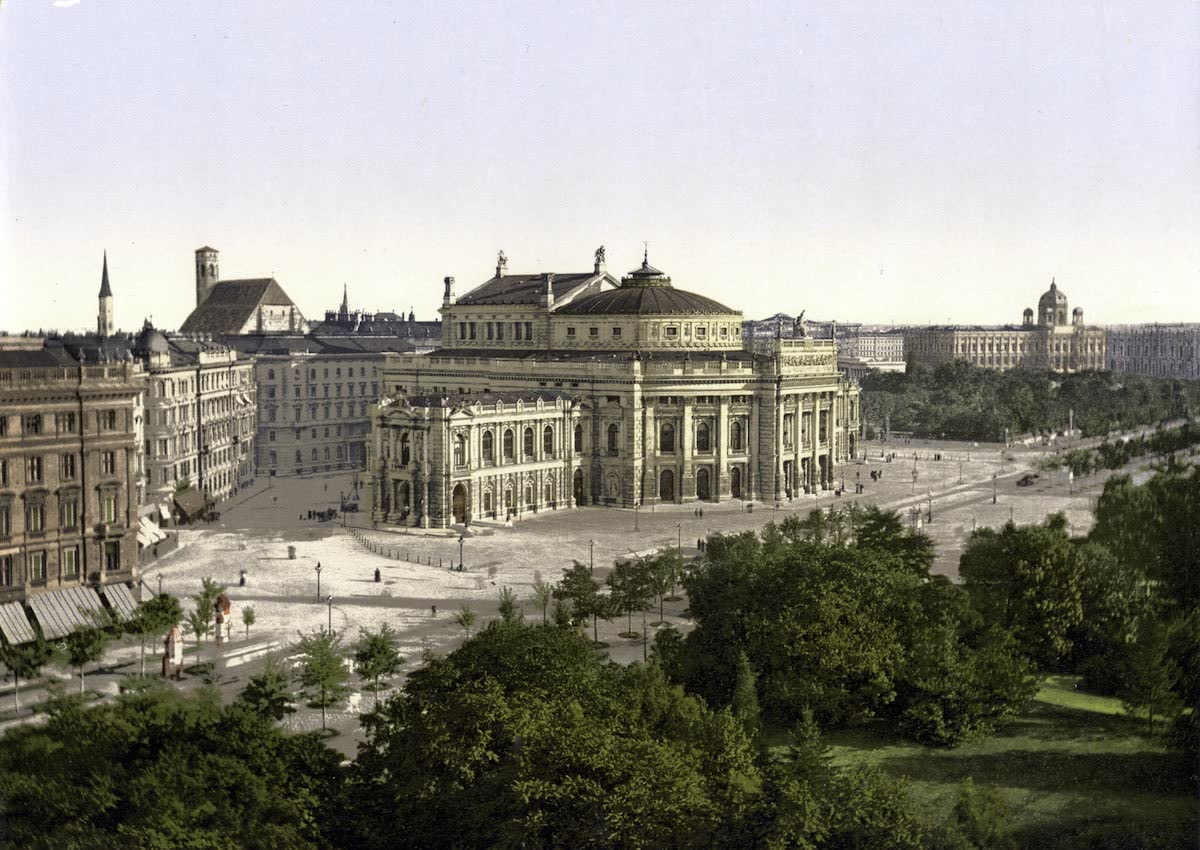 Austria is a state in Europe near Germany and Switzerland that was part of the Austro-Hungarian Empire along with Hungary. It is the only large European state without possessions outside of Europe. The name Austria means the east country, because Austria originated in 796 as a county east of Germany. Austria, next to Switzerland, is one of the most mountainous countries in Europe, the Tyrolese scenery being grand and beautiful.

Austria was founded as a small outpost of the Empire of Charlemagne in 706. Arpad a century later founded Hungary (886), and for six and one half centuries each grew independently. Hungary became a Kingdom in 1,000, many of its present institutions originating then; Austria a duchy in 1156, the accession of the Hapsburgs in 1282 initiating its greatness. Hungary in 1222, like England in 1216, won a constitution, and till 1490 was the strongest state in central Europe.

The Hapsburgs meanwhile acquired Carinthia, Carniola, Styria and Tyrol and the headship of the Holy Roman Empire, Vienna about 1500 becoming the metropolis of German art and science. In 1526 Hungary fell before Turkey but Austria obtained Bohemia, Hungary, Moravia and Silesia and received recognition as a European monarchy. At the Reformation, which made great progress in Hungary where millions today are Protestants, Austria remained with the Roman church. It was the bulwark of Christendom against Turkey, the mainstay of the papacy against Calvinism and Lutheranism.

Its almost ceaseless wars succeeded in liberating Hungary from the Turkish yoke. Numerous German colonists brought German civilization to Hungarian towns. The Hungarian estates, assembling in Pressburg, staunchly resisted every effort to absorb Hungary in the Austrian Empire. The Austrian states were in 1804 united as the Empire of Austria, its archduke becoming “Hereditary Emperor” and in 1806 he ended the Holy Roman Empire. Austria was a powerful force in overthrowing Napoleon and from 1815 to 1865 opposed every attempt of the Magyars at independence.

In 1848 Hungary rose under the lead of Kossuth, but was subjected to the imperial armies with the help of Russia. Austria renewed its efforts to germanize Hungary but failed and meanwhile lost Italy and Germany. So independence and self-government were restored to Hungary and arrangements were made that united Austro-Hungary to a real union founded upon the same dynasty and an old pact called the Pragmatic Sanction dated 1721–1722.

By this fundamental law all parts of the old Hapsburg Empire were forever united under the rule of its dynasty and bound to common defense against foreign attacks. Austria-Hungary have one army, coinage, diplomatic service, sovereign, and tariff, foreign affairs and war being managed by a dual committee called the Delegations; but Austria and Hungary each have their own ministry and premier.

Geography. The mountains are the Alps in the west, whose loftiest heights tower nearly 13,000 feet, and the Carpathians on the north and east that rise almost 9,000 feet. There also are moderate heights in the south. Between these ranges lie the lowlands of Austria and the plain called Hungary. The chief rivers are the Danube, Dniester, Moldau-Elbe and Vistula. The first two drain to the Black Sea, the third to the German Ocean, the fourth to the Baltic. Small mountain lakes are numerous and beautiful, large lakes few.

Climate. The climate and rainfall vary greatly, and we find northern, intermediate and southern zones. In Bohemia, Galicia, Moravia, in the northern districts of Austria proper and Hungary and in Silesia the winters are long and severe, the summers warm but brief. In Carniola, Styria and middle Hungary the summers are hot, the winters moderate. In Bosnia and Croatia, in semi-tropic Dalmatia and southern Hungary the winters are brief and mild, the summers long and hot. The annual mean temperature is 50°, the range of rainfall from 25 inches on the Hungarian lowland to 100 on the Carpathians.

Resources. Austria-Hungary is almost the richest of European countries in minerals, all except platinum being found. Copper, coal, iron, lead, petroleum, quicksilver and rock salt abound. The Indria quicksilver mine ranks next to that of Almaden, Spain. Bleiburg lead-mines are the richest in Europe. The Galician salt-mines are a world’s wonder, the deposits being 1,200 feet deep and 300 miles long. Thirty miles of galleries have been dug, and villages built far below the surface. The gold-production is the second largest in Europe, some of the gold mines having been worked by Celts and Romans. The mountains are covered with forests full of valuable varieties of timber. Practically all the land is utilized, three fifths of Austria-Hungary’s area being devoted to agriculture and one third to forests.

Agriculture. The staple industry is agriculture. More than two thirds of Austrians till the soil or raise stock. The plants and grains of the temperate zones prevail and a great variety of agricultural products is raised successfully. Austria leads in barley, flax, hemp, hops, potatoes, rye, sugar beets and tobacco. Fruit-raising is a great industry. The pear and apple thrive in the north; and almonds, figs, lemons, olives and oranges in the south, while along the Adriatic the palm flourishes in the open air. More horses are raised than in any other country of Europe except Russia.

Economy. Austria-Hungary is a land of transition from the industrial west to the agricultural east; Austria being more the manufacturer, Hungary more the farmer. But Hungary invented modern processes of flour-making and Budapest leads Europe as a milling center. The best inventions are employed, wheat is classified in seven grades, and uniformity of product causes Hungarian flour to command high prices. Wine-making is another great Hungarian industry, Tokay being world famous.

In Austrian lands textiles are the most important manufactures, then woolens, carpets, machinery, railroad materials and tools, leather and gloves; and furniture, ships and toys. Bohemia has half the glass-factories, and Bohemian glass has been famed for centuries. The manufacture of beet-sugar ranks next to Germany’s production. The largest exports are sugar, timber, cattle, wheat, leather goods, eggs, coal and glass; the main imports are cotton and wool fibers, yarn, cloth and machinery. Germany is the greatest buyer and seller, America the third among buyers and sixth among sellers. We buy Austria-Hungary’s glass, gloves, sugar, porcelain, pottery, musical instruments and beer, and sell cotton, corn, hog-products and pig-iron, buying a fourth as much as we sell.

Transportation. River valleys, mountain passes and a coast of only 465 miles form nature’s roads to foreign countries. The Danube, whose course of 820 miles in Austria is fully navigable, is free to all nations and seagoing ships navigate it from the Black Sea into Germany. The stream is connected by canals with the Elbe and Theiss and has over 100 navigable tributaries. The Moldau-Elbe at favorable stages is navigable from above Prague, Bohemia, to Hamburg, Germany. The Morava and Oder open waterways from Vienna into German Silesia. The Save and Drave, important navigable tributaries of the Danube in the south, are also linked by a canal. The waterways available for steamers give 1,620 miles of inland navigation, the others 2,340 more. The merchant marine is the smallest in Europe, most of the maritime traffic passing through Trieste and Fiume on the Adriatic. Since the rivers do not lead to these ports, four fifths of Austria-Hungary’s ocean-freight are transported by railroads, all converging on Vienna and Budapest. The railroads are less developed than in most European countries, their mileage of 25,000 miles being only one third that of France, but international overland routes lead to Bucharest, Constantinople and Salonika. A railroad through Arlberg tunnel leads to Geneva, Marseilles and Paris, another over Brenner pass into Germany and Italy, and a third via Semmering pass and tunnel to Genoa, Trieste and Venice.

Education. Primary instruction is compulsory and free from six to fourteen years of age. The schools are controlled by a department of public instruction, and are excellent, but every province remains responsible for the management of its schools. For secondary instruction admirable provision is made in hundreds of excellent colleges, gymnasia or high schools, professional and technical schools, and eight universities. Among these, Prague and Vienna are famous.