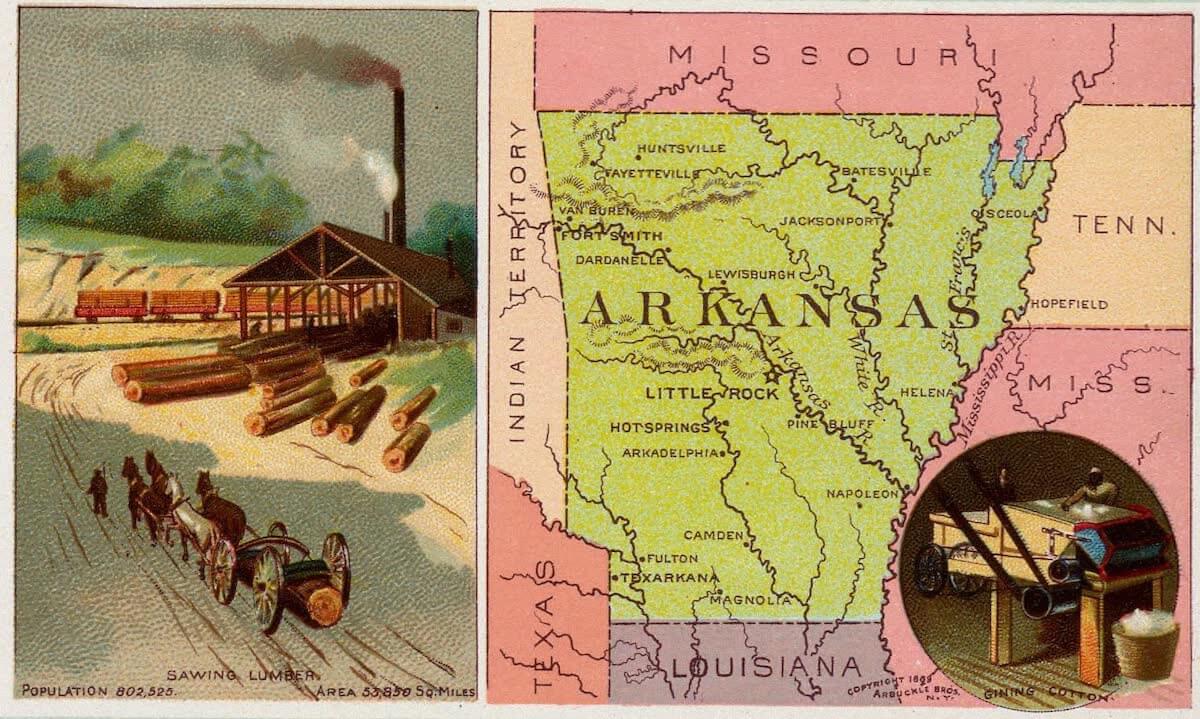 Arkansas (är? k?nsa?), a state which takes its name from the Arkansas Indians. By act of the legislature some years ago it was declared that the correct pronunciation of the word is Ar?kansa?. It has the Mississippi River on the east, Missouri on the north, Oklahoma on the west and Louisiana on the south. The state is larger than New York: area 53,845 square miles.

Possibly the earliest settlement in the state was made in 1686, at Arkansas Post by the French. By the purchase of the Louisiana Territory in 1803, the United States acquired its title to the territory, though it was not till 1824 that the Indian claims were finally adjusted. Arkansas became a territory in 1819 and a state in 1836. It withdrew from the Union in 1861, and was not readmitted till 1868. During the "Carpet Bag" administration the state suffered much, but since the Brooks and Baxter War, occasioned by rival claims to the office of governor, and adoption of the present constitution in 1874, the progress of the state has been marked. Population 1,574,449.

Surface. The surface of Arkansas varies in elevation from the lowlands of the Mississippi Valley in the east, only a few feet above the sea level, to the Ozark Mountains in the northwest, approaching an elevation of 2,000 feet. Extending from Helena in the southeast due north to the northern limit of the state is an elevation known as Crowley's Ridge, varying in width from one to fourteen miles and having an average elevation of 400 feet. On this ridge are situated most of the important towns in eastern Arkansas. Mt. Magazine is the highest point in the state, reaching an elevation of over 3,000 feet. The central part of the state is level or rolling, much of it being extensive prairies.

Rivers and Lakes. The Arkansas, White, St. Francis, Ouachita and Red Rivers are the principal streams. In the higher regions they are swift and afford excellent water-power for milling interests. There are many lakes in the state, and these, together with the rivers, abound in various kinds of game fish.

Climate. The climate of Arkansas is equable, though in the mountainous regions the winters are somewhat rigorous. Snow rarely falls south of the Ozark Mountains. The mean annual temperature is about 63° F. The yearly rainfall is about 42 inches. In the river bottoms malarial influences render the climate somewhat unhealthful, but aside from this the climate is remarkably salubrious. Some of the finest springs in the Union may be found within its borders, notably, the famous Hot Springs where there are annually more than 50,000 visitors, Potash Sulphur Springs, White Sulphur Springs, Eureka Springs and Mammoth Spring, whose waters form a large lake and furnish water-power for several mills.

Natural Resources. The forests of Arkansas cover large areas, and furnish vast supplies of pine, cypress and hardwood of many varieties. In the northwest part of the state are vast beds of coal of the best quality. The zinc mines of the north are attracting the attention of capitalists, and the ore, found in large quantities, is of a very high grade. Bauxite is found in the southern part of the state and large quantities are exported. Valuable deposits of manganese are to be found in several counties. Vast beds of the finest quality of slate are located in the western part of the state. A very high grade of clay, suitable for pottery and tiling, is widely distributed in the southwest. Iron, antimony, novaculite and other minerals are to be found. The quarries furnish practically inexhaustible supplies of marble and building stones. A superior quality of onyx is found in Carroll County.

Industries. As an agricultural and horticultural state Arkansas takes high rank. The fertile river-bottoms yield immense crops of cotton and corn. In 1909, 718,117 bales of cotton and 50,400,000 bushels of corn were raised. Wheat, oats, barley and other cereals are grown. Alfalfa is produced in large quantities in many localities. Fruit-growing is becoming an important industry. The shipment of strawberries from Crawford County will average in value $250,000, and the apple crop of Washington County at $2,000,000. The vast acreage of peaches, some orchards containing over three hundred acres, adds much to the wealth of the state. The shipment of potatoes also reaches large proportions. A few years ago the United States government began experiments in the culture of rice on the prairies east of Little Rock. The success of the effort has been marked. The land is irrigated from pumps sunk to a depth of less than 200 feet, where abundant water-supply is found. The yield of rice averages about forty bushels to the acre, and the acreage has been very largely increased. The extensive prairies furnish excellent facilities for raising cattle, sheep and horses at moderate cost, and these are exported in large numbers.

Manufactures. The manufacturing interests of the state are being steadily developed. Some of the largest lumber mills in the south are located in this state, and the export of lumber is large. The largest oar factory in the world is located at Devalls Bluff, while another of much importance may be found at Clarendon. Immense stave and hub factories may be found in the northeastern part of the state, and the manufacture of sash, doors, blinds and furniture is carried on in many places. Mining forms an important industry in the western part of the state, covering an area of 2,000 square miles. The output of coal in the year 1909, was 2,122,462 tons, which was the lowest in five years, owing to failure to operate the mines for several weeks on account of local troubles. Hot Springs has the unique distinction of having an ostrich farm where over one hundred and fifty birds are kept, and the number is being steadily increased; also an alligator farm where hundreds of these saurians varying in size from a few inches in length to twelve or fourteen feet are found. The sale of ostrich plumes and of alligator hides produces considerable revenue for the promoters of these interests. The leading cities of Arkansas are Little Rock, Fort Smith, Pine Bluff, Hot Springs, Texarkana and Jonesboro. The state charitable institutions are located at the capital.

Railroads. The Iron Mountain, Frisco, Kansas City Southern, Cotton Belt and Rock Island have trunk lines crossing the state, while many tributary lines afford easy means of access to all parts of the state.

Education. Since the adoption of the constitution of 1874, education has been steadily advancing. The state university, located at-- Fayetteville, has an enrollment of 1,000 students. The law and medical schools, under the control of this institution, are located in Little Rock, and each enrolls about three hundred students. The Branch normal school for negroes is located at Pine Bluff. The leading denominational schools are Henderson College (Methodist) and Ouachita College (Baptist), located at Arkadelphia; Searcy Female Institute and Galloway College (Methodist), located at Searcy; Hendrix College (Methodist) and Central College (Baptist), located at Conway; Arkansas College (Presbyterian), located at Batesville. The Arkansas Military Academy is located at Little Rock. Besides these there are about eighty private academies and high schools. All these institutions enjoy a liberal patronage. The legislature of 1907 provided for an increased tax levy for school purposes, county supervision of schools, and a state normal school. For the year ending June 30, 1911 the reports show an enrollment of 404,760 pupils in the public schools, under the instruction of 9,834 teachers. The expenditures for school purposes for that year amounted to $3,510,132, over $600,000 being for the erection of new school-houses. The public school property is valued at $7,872,856.