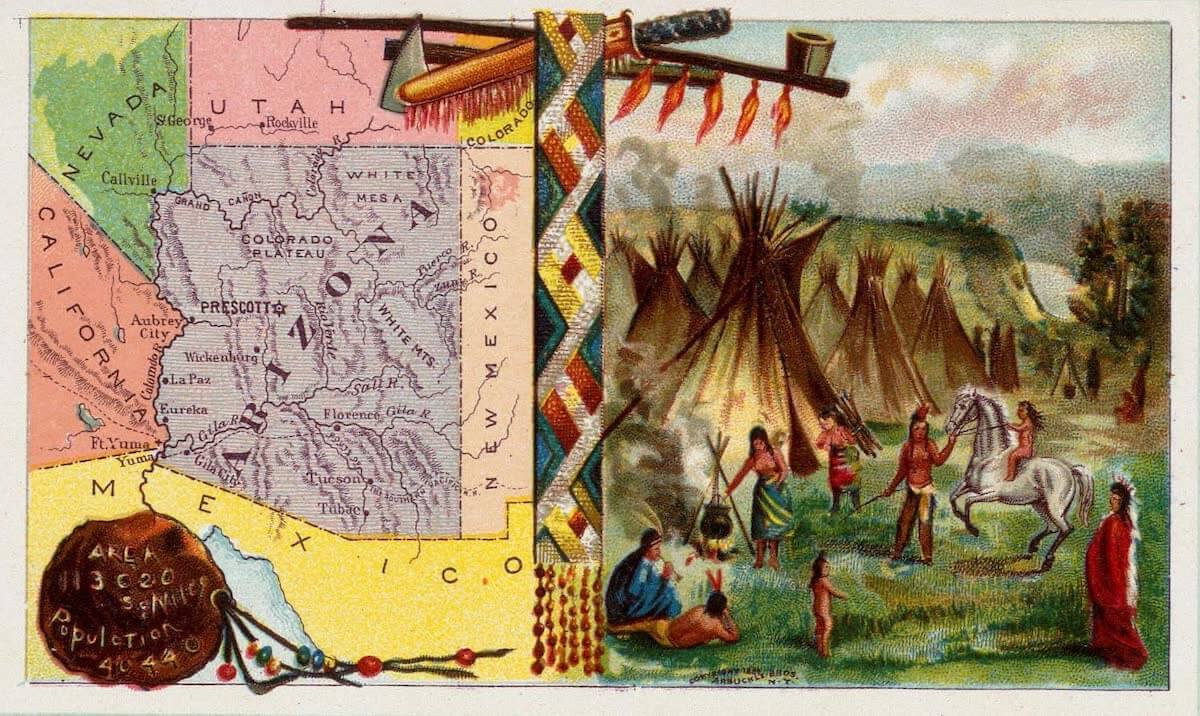 Arizona, a southwestern state of the United States, is as large as Italy or New York and New England combined; area, 112,920 square miles. It is made up of great plains, mountains and cañons. The highest peak is Mt. San Francisco, 12,561 feet. The Colorado River, 1,100 miles long, runs through the mightiest series of chasms in the world, with walls of marble and granite 1,000 to 6,500 feet high. Where it is highest it is called the Grand Cañon. The Gila River is 650 miles long, and with its tributaries entirely crosses the southern portion of the territory.

The capital is Phoenix (population 11,134). Tucson, Jerome and Prescott are other large towns. An Italian friar and a freed African slave were the modern discoverers of Arizona, going there from Mexico in 1539 as missionaries. They found traces of a great and populous race, that had once lived there, either of the Pueblo or Aztec stock. The Jesuits followed these discoverers, but all their work was swept away by the Apache forays in 1828.

That part of the state north of the Gila River was ceded to the United States by Mexico in 1848 and the remainder in 1853 by the Gadsden purchase. Arizona was organized as a territory in 1863, having previously been part of New Mexico. With its admission as a state, Feb. 14, 1912, the last territory passed, and continental America became wholly a union of states. Population, 204,354.

Climate. There is a difference of both temperature and rainfall between the northern and southern sections, owing to their altitudes. Although the sandy region around Yuma is the hottest district north of the Isthmus of Panama, the dry atmosphere keeps the summer's heat from being very oppressive and makes the winter climate delightful.

Minerals. Arizona is rich in minerals, and mining is the chief business. Jerome is a very active mining town in the copper region; there has also been considerable development of gold mines. Coal, mica, nickel ores, wolframite, from which tungsten is made, limestone, marble, granite, sandstone, vanadium, turquoise and garnet occur. In Navajo County is a wonderful chalcedony forest. The cracked trunks of this petrified wood are sometimes four feet thick, and show the most exquisite colors. The total value of mineral output in 1910 was 43,483,912 dollars.

Forests. The mountain areas of Arizona are covered with forests of pine, cedar and other timber, while the cottonwood follows every stream. In the vicinity of the San Francisco Mountains the lumber industry is quite important, but in this and other sections the government has set aside vast timber tracts.

Agriculture. Because of lack of water, agricultural development has been greatly retarded. The valleys are remarkably fertile, and much is expected from the arid sections with the construction of the government reservoirs and extension of irrigated areas. The products at present embrace wheat, barley, alfalfa, apricots, oranges, olives, etc. Experiments are being conducted in the cultivation of Egyptian cotton and dates, thus utilizing the arid lands of the south.

Manufactures. Little as yet is being done in this line, but the chief manufacturing interests are mining, smelting, lumber and the car shop works.

Education. The public school system is good, and education is compulsory. In 1911 the public schools had 876 teachers and 32,029 enrolled pupils There are private and sectarian schools, a state university at Tucson, normal schools at Tempe and Flagstaff, high schools at Phoenix, Prescott and Mesa, and the government maintains several Indian schools. The state maintains an asylum for the insane near Phoenix, and an industrial school at Benson.