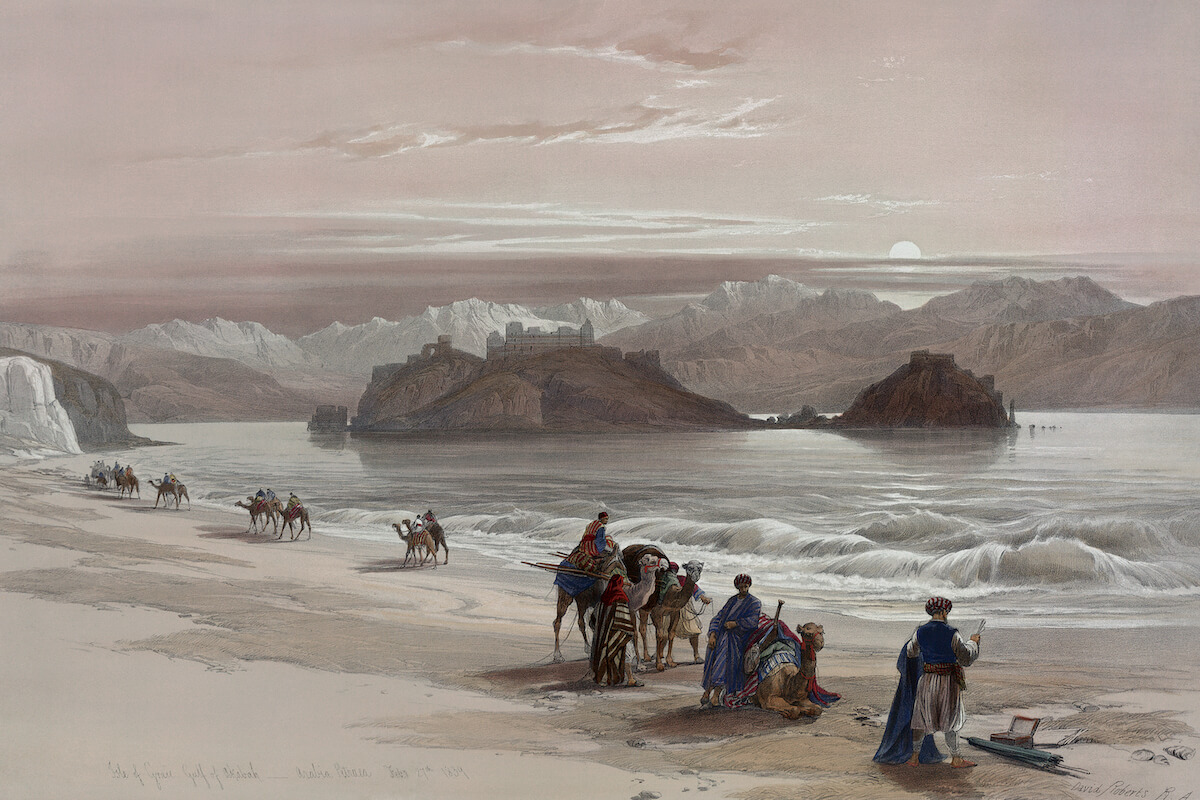 Arabia is an extensive quadrangular peninsula forming the extreme southwest part of Asia, much of the interior of which is an arid, sandy desert. It is situated between 12° 40' and 34° north latitude and between 32° 30' and 59° 40' east longitude. The Arabs claim descent from Ishmael, and have ever been a wild and independent people of nomadic habits and predatory instincts.

Their history proper begins with the advent of the religious enthusiast, Mahomet (570–632 A. D.), and with the foundation of the caliphate. Leaving their peninsula, the Arabs and their caliphs founded large and powerful empires in three continents, which flourished until the close of the 15th century, when Arab rule and influence in Europe and Asia Minor came to an end. In the following century the Turks obtained possession of Yemen, and, though for a time they were expelled from that Arabian province, they subsequently settled down in the peninsula and obtained at least nominal possession of its holy cities as well as those in the Hejas province.

Since then, the one alloy in the Turkish cup was the rise and dominance for a time of the Wahabis, a religious sect which sought control of the Mohammedan holy cities and shrines, and menaced the Sultan's interests in the country as protector of the sanctuaries. The rebellion—which it was—was attempted to be put down, but it took many campaigns from the years 1811 to 1818 before this could be effected by Ibrahim Pasha, acting under Mehemet Ali, Viceroy of Egypt. The Wahabis, despite Turkish sway, still exert a considerable influence in Arabia.

Geography. Its length, from north to south, is about 1,500 miles, and its breadth from east to west varies from 800 to 1,200 miles. It is bounded on the south by the Gulf of Aden, the Arabian Sea and Indian Ocean; on the east by the Gulf of Oman and the Persian Gulf, the Tigris River in the northeast separating it from Persia; while its northern boundary is Asiatic Turkey; and its western the Red Sea and Strait of Bab-el-Mandeb.

The Sinaitic Peninsula and the Suez Canal on the extreme northwest separate Arabia from Egypt and the continent of Africa. In the southwest the island and fortified port of Aden and that of Perim both British possessions subject to the Bombay (East Indian) Government form excellent harbors and coaling stations. The other harbors (there are not many on the Arabian Coast) include Muscat on the Gulf of Oman, El Kuweit near the mouth of the Tigris, and Dafar (or Dhofar) near the British Kuria-Muria Islands in the Arabian Sea.

Government. The peninsula is politically a dependency of Turkey, and by that power its more settled region, on the Red Sea front, is created into two vilayets or provinces, named Hejas (area, 96,500 square miles, with a population of 300,000) and Yemen (area, 73,800 square miles, with a population estimated at 750,000). In the former (Hejas) the chief port is Jedda, the administrative seat and the objective point of pilgrims, proceeding from Syria and Egypt on their way to the inland city of Mecca, the birthplace of Mohammed and containing the Kaaba, the holy shrines and sacred mosques of Islam.

North of Mecca lies Medina, with its Red Sea port of Yambo. Medina, too, has its fine mosques, one of them being erected on the spot where Mohammed died. The capital of Yemen, is Sanaa, its port being Hodeida on the Red Sea. South of Hodeida, near the Strait of Bab-el-Mandeb, is Mocha, the seat of the coffee trade, which is now chiefly exported from Aden and Hodeida. Inland from these two provinces lies the Syrian desert on the north; and on the south, extending for hundreds of miles from Yeman to Oman, are the deserts of El Akhaf and Roba'a-el-Khali.

Economy. Arabia with its extensive tablelands, varied by its vast trackless deserts, has a hot, dry climate, only the coastal plains being fertile and productive. On the latter, browsing on the grassy slopes, are reared donkeys, goats and dromedaries. Besides these, Arabia has many wild animals, the terror of travellers and the menace to the native caravans; among these are tigers, Panther, hyenas and lynxes, besides the less repellant and more useful ostriches and gazelles. Among the natural resources, besides the rice plant, the coffee tree and the date palm, there are many spice and incense shrubs, together with the cotton and maize plants; while gum arabic and precious stones form a considerable portion of the exports.