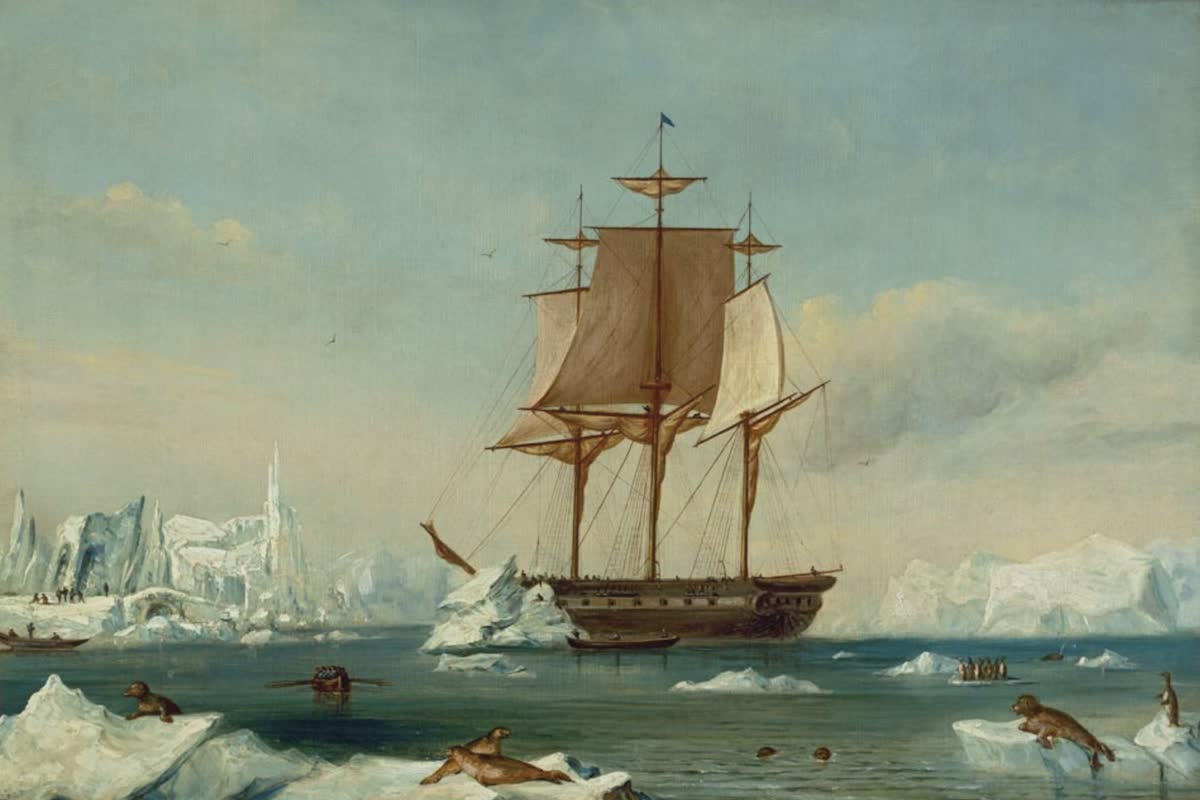 Antarctica is Earth's southernmost continent. It contains the geographic South Pole and is situated in the Antarctic region of the Southern Hemisphere, almost entirely south of the Antarctic Circle, and is surrounded by the Southern Ocean. Antarctica, on average, is the coldest, driest, and windiest continent, and has the highest average elevation of all the continents.

There are not many early works available about Antarctica as it was the last region on Earth in recorded history to be discovered, unseen until 1820 when the Russian expedition of Fabian Gottlieb von Bellingshausen and Mikhail Lazarev on Vostok and Mirny sighted the Fimbul ice shelf. Other famous early explorers of the Southern Ocean include James Cook and James Weddell.

The continent, however, remained largely neglected for the rest of the 19th century because of its hostile environment, lack of easily accessible resources, and isolation. In 1895, the first confirmed landing was conducted by a team of Norwegians. Later it would be explored by many nations including the United States, Britain, Russia and more with the Antarctic Treaty System being put into place in order to protect against harmful human settlement and resource exploitation while encouraging scientific and technological research.

Antarctica has no indigenous population, and there is no evidence that it was seen by humans until the 19th century. However, in February 1775, during his second voyage, Captain Cook called the existence of such a polar continent "probable" and in another copy of his journal he wrote:" [I] firmly believe it and it's more than probable that we have seen a part of it".

However, belief in the existence of a Terra Australis—a vast continent in the far south of the globe to "balance" the northern lands of Europe, Asia and North Africa—had prevailed since the times of Ptolemy in the 1st century AD. Even in the late 17th century, after explorers had found that South America and Australia were not part of the fabled "Antarctica", geographers believed that the continent was much larger than its actual size. Integral to the story of the origin of Antarctica's name is that it was not named Terra Australis—this name was given to Australia instead, because of the misconception that no significant landmass could exist further south. Explorer Matthew Flinders, in particular, has been credited with popularizing the transfer of the name Terra Australis to Australia. He justified the titling of his book A Voyage to Terra Australis (1814) by writing in the introduction:

There is no probability, that any other detached body of land, of nearly equal extent, will ever be found in a more southern latitude; the name Terra Australis will, therefore, remain descriptive of the geographical importance of this country and of its situation on the globe: it has antiquity to recommend it; and, having no reference to either of the two claiming nations, appears to be less objectionable than any other which could have been selected. European maps continued to show this hypothesized land until Captain James Cook's ships, HMS Resolution and Adventure, crossed the Antarctic Circle on 17 January 1773, in December 1773 and again in January 1774. Cook came within about 120 km (75 mi) of the Antarctic coast before retreating in the face of field ice in January 1773.

According to various organizations (the National Science Foundation, NASA, the University of California, San Diego, the Russian State Museum of the Arctic and Antarctic, among others), ships captained by three men sighted Antarctica or its ice shelf in 1820: Fabian Gottlieb von Bellingshausen (a captain in the Imperial Russian Navy), Edward Bransfield (a captain in the Royal Navy), and Nathaniel Palmer (a sealer from Stonington, Connecticut).

The First Russian Antarctic Expedition led by Bellingshausen and Mikhail Lazarev on the 985-ton sloop-of-war Vostok ("East") and the 530-ton support vessel Mirny ("Peaceful") reached a point within 32 km (20 mi) of Queen Maud's Land and recorded the sight of an ice shelf at 69&176;21'28?S 2&176;14'50?W, on 27 January 1820, which became known as the Fimbul ice shelf. This happened three days before Bransfield sighted land and ten months before Palmer did so in November 1820. The first documented landing on Antarctica was by the American sealer John Davis, apparently at Hughes Bay, near Cape Charles, in West Antarctica on 7 February 1821, although some historians dispute this claim. The first recorded and confirmed landing was at Cape Adair in 1895 (by the Norwegian-Swedish whaling ship Antarctic).

On 22 January 1840, two days after the discovery of the coast west of the Balleny Islands, some members of the crew of the 1837-40 expedition of Jules Dumont d'Urville disembarked on the highest islet of a group of rocky islands about 4 km from Cape Geodesie on the coast of Adelie Land where they took some mineral, algae, and animal samples, erected the French flag and claimed French sovereignty over the territory.

In December 1839, as part of the United States Exploring Expedition of 1838-42 conducted by the United States Navy (sometimes called the "Ex. Ex.", or "the Wilkes Expedition"), an expedition sailed from Sydney, Australia, into the Antarctic Ocean, as it was then known, and reported the discovery "of an Antarctic continent west of the Balleny Islands" on 25 January 1840. That part of Antarctica was named "Wilkes Land", a name it retains to this day.

Explorer James Clark Ross passed through what is now known as the Ross Sea and discovered Ross Island (both of which were named after him) in 1841. He sailed along a huge wall of ice that was later named the Ross Ice Shelf. Mount Erebus and Mount Terror are named after two ships from his expedition: HMS Erebus and Terror. Mercator Cooper later landed in East Antarctica on 26 January 1853.

During the Nimrod Expedition led by Ernest Shackleton in 1907, parties led by Edgeworth David became the first to climb Mount Erebus and to reach the South Magnetic Pole. Douglas Mawson, who assumed the leadership of the Magnetic Pole party on their perilous return, went on to lead several expeditions until retiring in 1931. In addition, Shackleton and three other members of his expedition made several firsts in December 1908 - February 1909: they were the first humans to traverse the Ross Ice Shelf, the first to traverse the Transantarctic Mountains (via the Beardmore Glacier), and the first to set foot on the South Polar Plateau. An expedition led by Norwegian polar explorer Roald Amundsen from the ship Fram became the first to reach the geographic South Pole on 14 December 1911, using a route from the Bay of Whales and up the Axel Heiberg Glacier. One month later, the doomed Scott Expedition reached the pole.