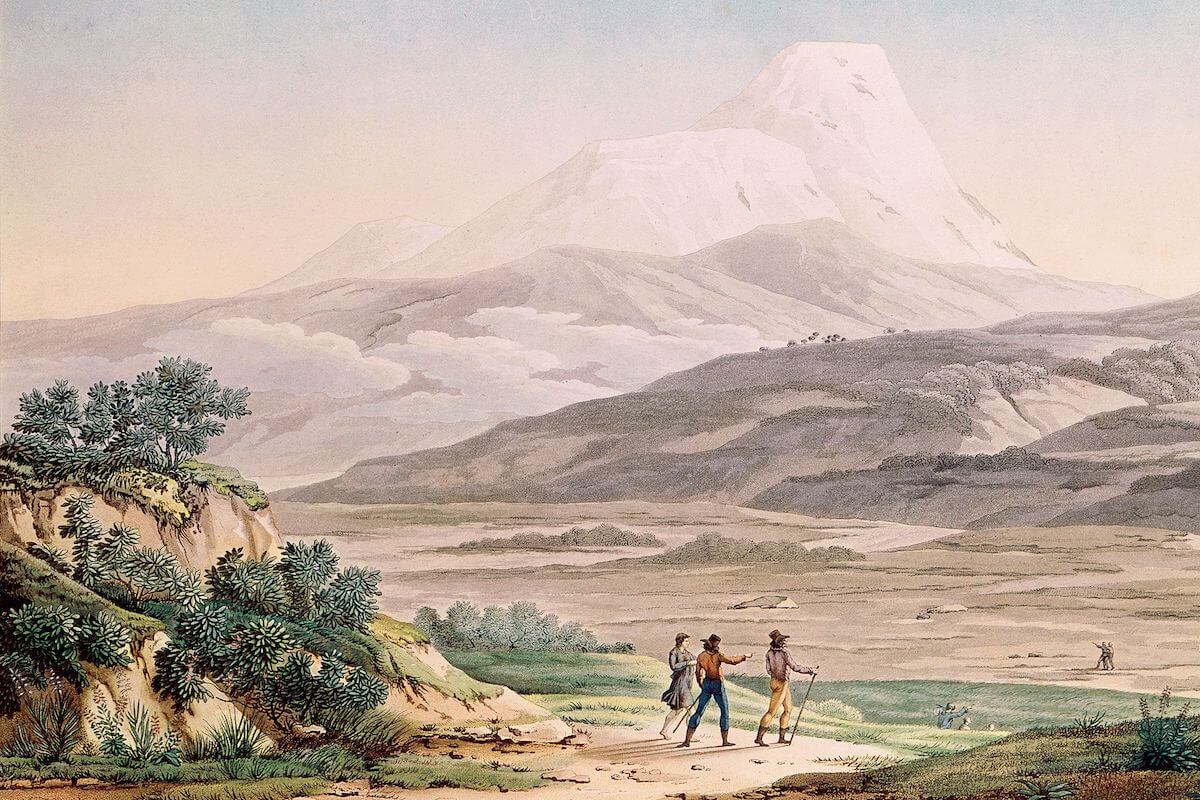 ANDES (an´d?z), or, as they are called in Spanish South America, Cordilleras (ridges) de los Andes, or simply Cordilleras, a range of mountains stretching along the whole of the W. coast of South America, from Cape Horn to the Isthmus of Panama and the Caribbean Sea. In absolute length (4,500 miles) no single chain of mountains approaches the Andes, and only a certain number of the higher peaks of the Himalayan chain rise higher above the sea-level.

Several main sections of this huge chain are distinguishable. The southern Andes present lofty main chain, with a minor chain running parallel to it on the E., reaching from Tierra del Fuego and the Straits of Magellan, northward to about latitude 28° S., and rising in Aconcagua to a height of 22,860 feet. North of this is the double chain of the central Andes, inclosing the wide and lofty plateaus of Bolivia and Peru, which lie at an elevation of more than 12,000 feet above the sea. The mountain system is here at its broadest, being about 500 miles across. Here are also several very lofty peaks, as Illampu or Sorata (21,484 feet), Sahama (21,054), Illimani (21,024).

Further N. the outer and inner ranges draw closer together, and in Ecuador there is but a single system of elevated masses, generally described as forming two parallel chains. In this section are crowded together a number of lofty peaks, most of them volcanoes, either extinct or active. Of the latter class are Pichincha (15,918 feet), with a crater 2,500 feet deep; Tunguragua (16,685 feet); Sangay (17,460 feet); and Cotopaxi (19,550 feet). The loftiest summit here appears to be Chimborazo (20,581 feet); others are Antisana (19,260 feet) and Cayambe (19,200 feet). Northward of this section the Andes break into three distinct ranges, the eastmost running north-eastward into Venezuela, the westmost running north-westward to the Isthmus of Panama. In the central range is the volcano of Tolima (17,660 feet). The western slope of the Andes is generally exceedingly steep, the eastern much less so, the mountains sinking gradually to the plains.

The whole range gives evidence of volcanic action, but it consists almost entirely of sedimentary rocks. Thus mountains may be found rising to the height of over 20,000 feet, and fossiliferous to their summits (as Illimani and Sorata or Illampu). There are about 30 volcanoes in a state of activity. The loftiest of these burning mountains seems to be Gualateïri, in Peru (21,960 feet). The heights of the others vary from 13,000 to 20,000 feet. The passes are generally at a great height, the most important being from 10,000 to 15,000 feet. Railways have been constructed to cross the chain at a similar elevation.

The Andes are extremely rich in the precious metals, gold, silver, copper, platinum, mercury and tin all being wrought; lead and iron are also found. The llama and its congeners—the guanaco, vicuña and alpaca—are characteristic of the Andes. Among birds, the condor is the most remarkable. The vegetation necessarily varies much according to elevation, latitude, rainfall, etc., but generally is rich and varied. From the Andes rise two of the largest water systems of the world—the Amazon and its affluents, and the La Plata and its affluents. Besides which, in the N., from its slopes flow the Magdalena to the Caribbean Sea, and some tributaries to the Orinoco. In the Andes are towns at a greater elevation than anywhere else in the world, the highest being the silver-mining town of Cerro de Pasco (14,270 feet), the next being Potosi.