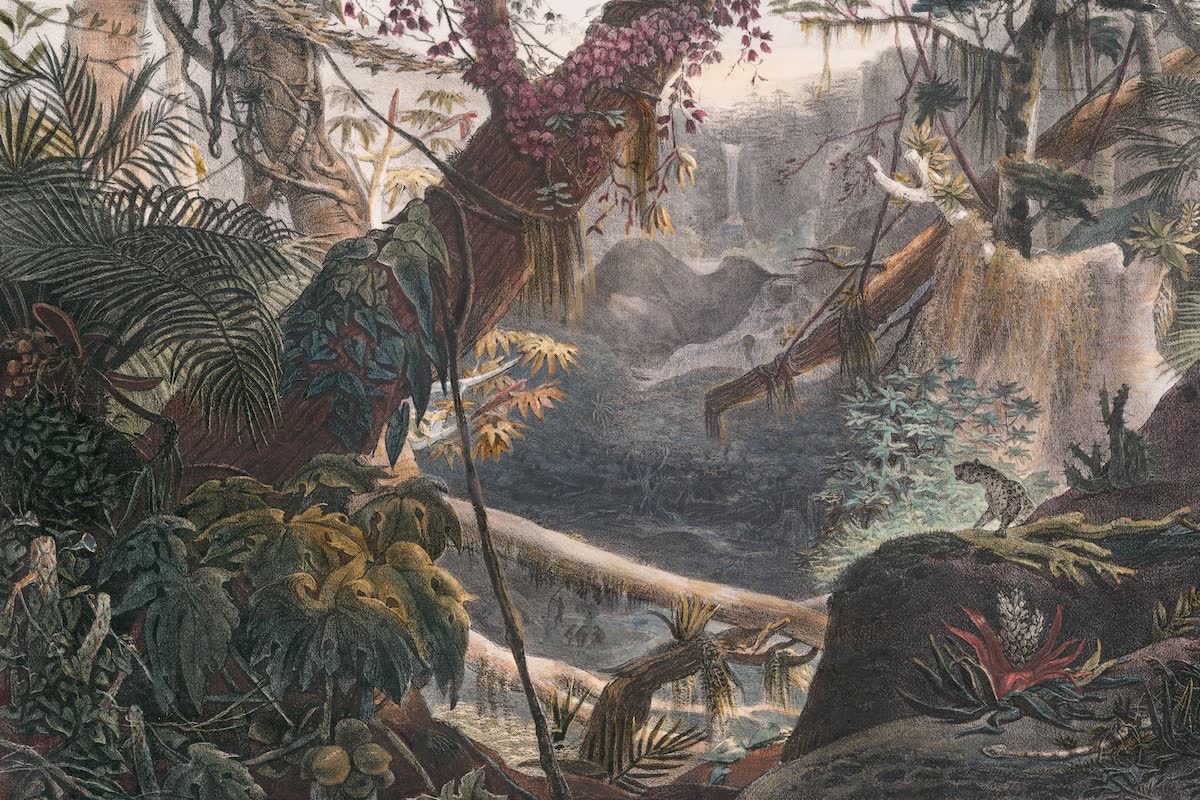 The Amazon is a river of South America, formerly called the Orellana, after a Spanish soldier of that name, who first explored it (Map: South America, D 3). The name Amazon is said to be derived from an Indian word meaning “boat-destroyer,” from the dangerous action of the tidal waves at the river's mouth. The native name of the river from the mouth of the Negro to the junction of the Marañon and the Ueayali, is Solimõens. Among the ports on the Amazon (from its mouth upward) are Macapá, Santarem, Obidos, Manãos, Teffe, and Tabatinga. The commercial outlet of the Amazon basin is Pará, on the Rio Pará, the estuary of the Tocantins.

The head waters of the Amazon, the Marañon and the Ueayali rivers, rise in the central and northern Peruvian Andes, and after a northerly course parallel with these mountains unite in about long. 74° W., and the united waters pursue an almost easterly course between lat. 5° S. and the equator to the Atlantic, which is reached in long. 50° W., where this meridian intersects the equator. The Marañon, which rises in long. 76° 30' W. and lat. 10° 30' S., is properly the head stream of the Amazon, as it is furthest west; but the Ueayali is slightly the larger, and has its source farther south in the Andes in long. 72° W. and lat. 16° S. From long. 70° W., where the Amazon leaves Peru, its course is confined to Brazil.

The total length of the Amazon from the head waters of the Ueayali is about 3300 miles. It is between one and two miles wide where it enters Brazil, and gradually increases in breadth, enlarging to a width of fifty miles at its main mouth; and where it enters the sea the distance across it, from headland to headland, is fully one hundred and fifty miles.

The total area drained by the Amazon is about two and one-half millions of square miles, a territory equal in extent to about 85 per cent. of that of the United States (exclusive of Alaska), and embraces most of the South American continent west of long. 50° W. and between lat. 3° N. and lat. 17° S., except a comparatively narrow strip along the Pacific coast, and a somewhat broader one on the Atlantic. The latitudinal zone drained by the rivers from the north averages only 6° or 7° in width, while that on the south has a breadth of 13° or 14°.

The chief rivers flowing into the Amazon from the north are the Napo, Putumayo, Yapura. and Rio Negro. These rivers flow in a direction more or less parallel with that of the Amazon, and thus they drain but a narrow longitudinal belt.

The chief affluents from the south (in addition to the Huallaga, an affluent of the Marañon, and the Ueayali) are the Javari, Juruá, Purus, Madeira, Tapajos, and Xingu. The Tocantins River practically belongs to this system of southern branches, being connected with the Amazon by an arm of that river, which cuts off the large island of Marajó.

The basin of the Amazon lies almost wholly within the belt of remarkably uniform equatorial heat, so that there is an uninterrupted plant growth throughout the year. There is a moderately heavy rainfall over the whole of the basin, except in the western part, where, east of the Andes, the rainfall is excessive; and higher up among the Andes, where it is deficient. The very heavy rains in the upper waters of the basin are responsible for the enormous amount of water supplied to the river, which makes it (and its western tributaries) navigable to such a great distance from its mouth. In most sections there is a rainy season from January to May, and a six months' dry season from June to December. In the Upper Amazon Valley the rainy season begins in November and continues until July, during which time the prevailing wind is northwest; but in the dry season the wind is chiefly from the southeast. The rainfall amounts to over 100 inches a year in this section.

The alternation of the rainy and dry seasons produces corresponding periods of high and low water in the rivers. Even in the Marañon a rise of 30 feet occurs in the wet season, and throughout the whole length of the Amazon during about half the year its waters are swollen and the adjoining low country inundated. These floods are not by any means of uniform magnitude, and at intervals of every few years abnormally high water occurs. The current of the Amazon averages about 2¼ miles per hour, but its velocity is much increased during the floods.

The drainage basin of the Amazon is remarkably level, and the slope from the outlying bounding highlands is very gradual. The height of land almost to the very sources of the branch rivers does not exceed 1000 feet, and as falls or rapids east of the Andes are almost unknown, these rivers are navigable for the greater part of their lengths. The Amazon and its tributaries form the most remarkable and extensive system of inland water highways in the world. The possibilities of future development in the chain of South American inland navigation are shown by the fact that on the north, the Amazon has water communication with the Orinoco through the Rio Negro and the Casiquiare, while on the south the navigable waters of the Tapajos lack little of connecting it with the head waters of a tributary of the Plata River.

Within the basin of the Amazon there occur horizontal layers of argillaceous rocks and sandstone, which vary in height from 100 feet to ten times that amount. These and other deposits seem to indicate that at one time a local mediterranean sea covered the present Amazonian lowlands, and the Marañon had for its outlet into the western end of this sea a delta, which has gradually moved eastward as the shallow sea became filled up.

Not only the source streams, but nearly all the tributaries of the Amazon, experience a succession of falls where their waters enter upon the floor of the main stream, and some branches have falls higher up. Above these falls, which vary from a succession of rapids to falls of 50 feet, or more, navigation is again resumed. On the Lower Amazon these rapids occur at a distance of only from 200 to 300 miles from the main stream; but the distance increases toward the west, so that on the Madeira and Rio Negro rivers the falls are far removed from the mouths, while most of the southern branch rivers west of the Madeira lie almost entirely within the unobstructed low belt.

Where the Amazon enters Brazil its elevation is less than 300 feet above sea-level. Even at its low stage its usual depth in its lower course is about 150 feet, and in places it is said to be much deeper still. It has been estimated that the Amazon discharges between four and five million cubic feet of water per second; and with this enormous outflowing water there is carried every twenty-four hours a quantity of sediment sufficient to form a solid cube measuring 500 feet on each edge.

The Amazon is navigable by steamers for a distance of about 2200 miles, and for smaller boats to points considerably beyond; but at the entrance to the gorges of the eastern Andes, navigation is practically suspended, on account of the rapids occurring there. Steamboat navigation of the Amazon began in 1853, but it was not until 1867 that the navigation of the river was thrown open to the world. Now regular lines of steamers ply from the mouth of the Amazon to Yurimaguas on the Huallaga River in north central Peru. Vessels enter the Amazon through the estuary of the Para River, since the main mouth of the Amazon north of Marajo Island is shoal water filled with rocky islands.

At the mouth of the Amazon there is a continual battling of the river current, the tides, and the winds. The tidal influence is felt up the river to a distance of about 400 miles. The tidal bore is at times so pronounced as to form successive walls of water ten to fifteen feet in height, which noisily sweep everything before them in their mad rush against the river current. The latter is perceptible at a distance of fully 200 miles seaward from the mouth of the river.

The importance of the Amazon as a highway of foreign commerce will become greater and greater as the economic development of Brazil proceeds, when in exchange for the ever-increasing quantities of tropical products exported from the Amazon basin, there will be returned the manufactures and products of the temperate zones.

Fauna. The Amazon Valley is covered with thick forests of lofty growth, which are thinly inhabited by numerous independent savage tribes. The animal life is exceedingly rich in numbers, but the flood conditions which so generally compel arboreal habits in unaquatic animals greatly limit at least the species of mammals. The principal animals are the tapir, jaguar, panther, cavy, armadillo, sloth, peccary, ant-eater, and monkey. Birds are exceedingly numerous; many of them are songless, but bedecked with gorgeously colored feathers; such are the humming birds and parrots. Among the snakes, the giant anaconda is the best known, and of the lizards the iguana attains formidable size. Numerous alligators and turtles, and the great water mammal, the manatee, frequent the river and its branches. Of fishes there is a greater variety than in any other stream, and in fact a large proportion of the present known species are found in the Amazon. Insects exist in the forests in countless numbers. Neither the fauna nor the flora of the Amazon has been more than partly studied, and that mostly by visiting naturalists.

Flora. The flora of the immediate vicinity of the river is that which flourishes in a watery soil, and which will survive the long-continued annual inundation which occurs in midsummer. There is no suspension of plant activity, and the leaves remain green throughout the year, and no month is without its bloom or fruit. Aquatic plants grow in great profusion and attain enormous size, a prominent example being the giant lily, Victoria regia. In the undergrowth occur rubias, myrtles, leguminosæ, epiphytic orchids, bromelia, and ferns.

The Amazonian forest presents to the river a wall-like frontage of trees, interwoven with vines and roots clothed and fringed with moss in the most fantastic manner. A continuous mass of verdure overhead has a secondary flora of its own. Some of the trees grow to a height of even 200 feet; such are the moviatinga, the samauma, and the massaranduba. Palms, bamboos, and ferns grow in profusion; but few tree ferns and almost no cacti grow immediately on the river.