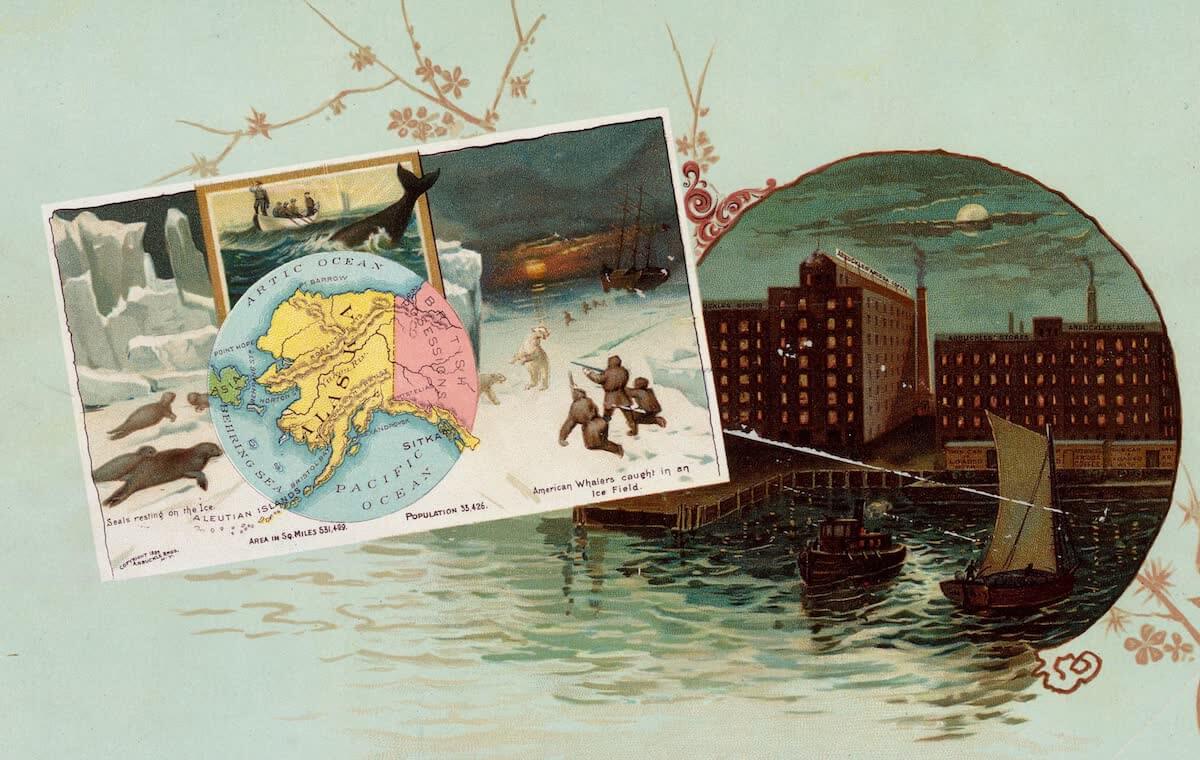 Alaska, a territory of the United States, situated in the extreme northwestern part of the continent. In a political sense Alaska is not a territory but a district, with no territorial organization. It is governed directly by Congress at Washington, and is locally administered by a governor appointed by the President.

It is bounded on the north by the Arctic Ocean; on the east by British Columbia and the northwest (Yukon) territories of Canada; on the south by the Gulf of Alaska and the North Pacific; and on the west by Bering Strait and the North Pacific Ocean. It comprises an area of 590,884 square miles, equal to one-sixth of the United States or one-seventh of Europe. Much of the coast line is very irregular, deeply indented and having many islands, the chief of which are the Aleutian, Prince of Wales, Chichagoff, Kadiak, Baranoff, Admiralty, Unimak, St. Lawrence, Kupreanof and Pribyloff Islands.

The peninsula and strait were discovered in 1728 by Vitus Bering, a Danish navigator in Russian service. The first settlement was made in 1784 on Kadiak Island at Three Saints, and in 1799–1800 the important one at Sitka. In 1867 the United States bought the territory from Russia for $7,200,000, and took formal possession on October 18th the same year.

Boundary Dispute. The United States and Russia claimed joint ownership of Bering Sea as an inland body of water to protect their seal fisheries. This Great Britain would not allow, for she had Canadian sealing interests to protect. At length in 1902 a protective agreement was entered into between the two nations. Besides, there was an old contention as to the United States and Canadian boundaries which was never urged because the districts in debate were regarded as worthless.

The discovery of gold in 1896–97 revived the question and forced a settlement. On September 3, 1903, the Alaskan Boundary Commission met in London, and on October 20, 1903, the official report was signed by the British and American commissioners, the Canadians refusing. The majority ruled, however, and the report was substantially in favor of the United States. By the decision the gold fields are part in Canada and part in the United States, but the Pacific coast-line is wholly within the control of the United States.

Cities. Juneau, in the southern district, near Douglas Island, is the capital (population 1,644); the other chief towns are Nome City, at Cape Nome on Norton Sound, opposite St. Michael (population 2,600), Sitka, on Baranof Island in Sitka Sound (population 1,039), Skaguay City near the head of the canal (population 872), and the chief mart where the miners purchase their supplies on their way north, by the Chilkoot Pass, overland to the gold mines of the Klondike and the Yukon. Alaska is provisionally divided into two districts, the northern and the southern, the census of 1910 giving the territory a total population of 64,356.

Geography. The coast line is followed by mountain ranges, which are a continuation of the Rocky Mountains, and spread apart in this peninsula. The main range bends westward along the coast to the end of the Alaskan peninsula. The other takes a northwest direction at Prince William Sound, and a second turn gives it a southwest-northeast direction, and it is known as the Alaskan Range. This is the loftiest elevation in North America. Its noted peaks are Mt. McKinley (20,464 feet), Mt. Logan (19,539 feet), Mt. St. Elias (18,024 feet) and Mt. Wrangell (17,500 feet).

Moving down through the valleys of this chain of mountains are the great ice rivers, known as glaciers. Many of these reach to the sea, and one of them, Muir Glacier, not far from Sitka, is wonderfully beautiful. Alaska's interior, west of the Porcupine Hills, is a vast swampy moor which stretches to interminable wastes of tundra that reach to the Arctic Ocean. The main river is the Yukon, over 2,000 miles long, which may be traveled from end to end four months out of the year without seeing snow. Other rivers are the Stickeen, Copper, Sushitna, Mushagak and the Kuskowim, and the tributaries of the Yukon, which are the Porcupine and the Tanana. The Sushitna is navigable for 110 miles and the Yeutna for 100 miles.

Climate. The entire coast section and the insular districts are influenced by the Japanese current and the mountains. The latter are a protection against the Arctic winds, while the former fills the air with warm vapors. Condensation takes place when these come in contact with the mountains and causes almost perpetual fog and rain. For these reasons the temperature is less extreme than in districts east of the Rockies. Inside the mountains, where the warm currents and vapors are absent, Arctic weather prevails—long intense winters and short warm summers.

Minerals. The all important mineral product so far is gold, of which the product in 1908 was $19,858,800. In 1909 the amount produced was $20,339,000, but in 1910 there was a decrease in gold production, the total shipment being $15,173,008. Coal is found in several places, the best grade in Copper River Valley. The main coast range contains extensive copper deposits, while silver, tin and petroleum have been found, and on Prince of Wales Island large quarries of marble.

Forests. The forest wealth of Alaska is also large, chiefly white pine, cedar and fir. The most valuable timber is the yellow cedar; there is also balsam fir, used for tanning, but the wood of universal use is the Sitka or Alaska spruce, which grows in a stunted form even up to the Arctic circle.

Agriculture. Alaska claims only that she can supply her present population with its agricultural needs. Experiments have demonstrated that oats, wheat, rye, barley, potatoes, turnips, beets, lettuce, radishes, etc., have been planted, and nearly all reached perfection in the brief summer. In the Yukon Valley are wild berries of great variety, wild celery, wild parsnip, beautiful ferns, purple lupine and red columbine, yellow lilies on the ponds and iris on the banks,

Fisheries. The fisheries of Alaska are among the richest in the world; more than half of the salmon product of the United States comes from Alaska, while cod, mackerel, halibut and herring are found. The Pribyloff Islands are the seat of the fur seal industry of Alaska. The number of seals to be killed each year is fixed by regulation of the secretary of the treasury.

Education. Alaska has 35 public schools, and the Protestant and Catholic church organizations have their missions, churches and converts.