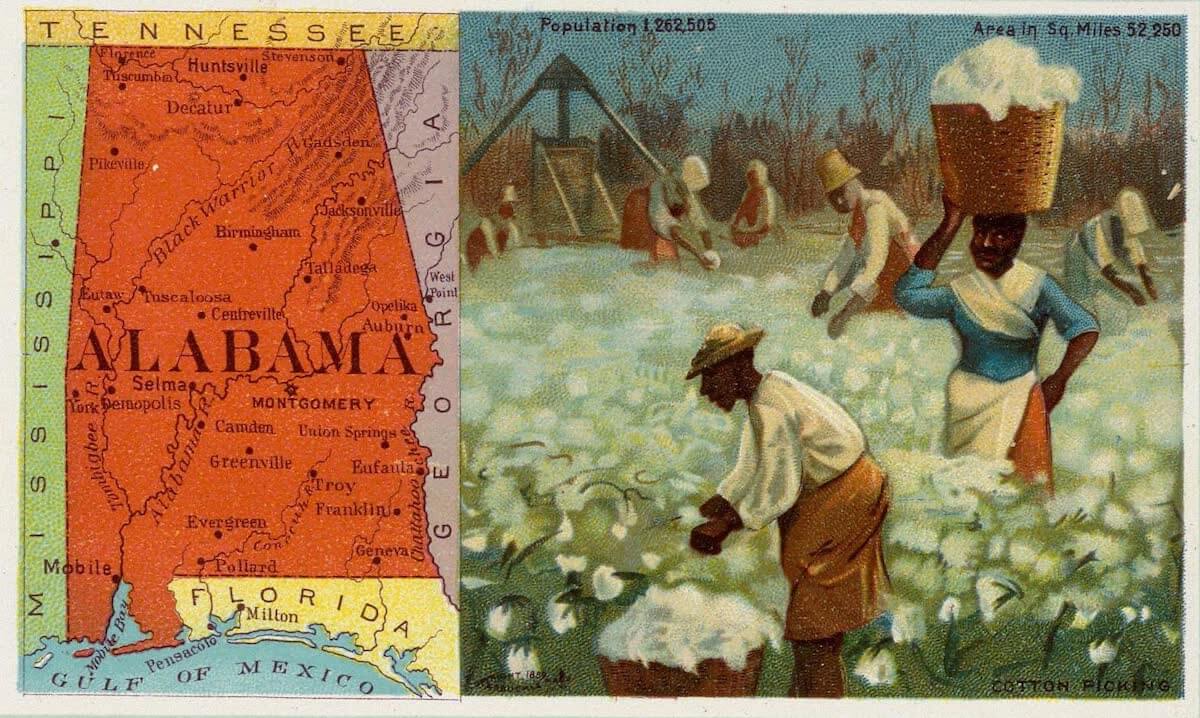 Alabama (?l' a-bä' ma), State of (meaning “here we rest”), with its southern border on the Gulf of Mexico, is from 150 to 200 miles wide, and from 278 to 336 miles long, and is larger than New York, Pennsylvania or Virginia. The first settlement was made at Mobile Bay, in 1702, by the Frenchman, Sieur de Bienville, called the “Father of Alabama,” though De Soto, the Spanish cavalier, was the first to cross the state with his knights, priests and crossbowmen, in 1540.

In 1813 occurred the war against Tecumseh and the Creeks. Alabama was admitted to the Union in 1819. In January, 1861, the state seceded and furnished the confederate army sixty-nine regiments of infantry, twelve of cavalry and twenty-seven batteries. The principal cities are Mobile, Montgomery (the capital), Birmingham, Anniston, Selma and Demopolis. Population 2,138,093.

Geography. The area of the state is about 52,250 square miles. The northern end of the state is crossed by the Tennessee River, which in the west flows through a fertile terraced valley, but in the eastern section is flanked by low mountain ranges. The Allegheny range enters in the northeast, trends southwest and terminates in foot hills and sand mountains toward the center of the state. The next succeeds on the west a plateau in which are found the rich iron and coal beds of which the state is famous; on the east a Piedmont region of rolling upland, while the southern part of the state, comprising three-fifths of its area, is a broad coastal plain. The chief rivers are the Mobile, Alabama, Tombigbee and Tennessee. The Mobile is formed by the junction of the Alabama and the Tombigbee, and after a short course of forty-five miles empties into Mobile bay.

Climate. Because of its altitude the northeastern section of the state has a delightful climate; the Piedmont region is healthful, and in the country near the coast the heat is tempered by the Gulf winds, while the low lands along the rivers are malarious.

Resources. The climate and varied soils of Alabama are favorable to the growth of a wide range of agricultural products, and previous to the discovery and development of its vast mineral wealth the products of the state were chiefly agricultural. The chief stop is cotton, grown throughout the state, but especially in the famous black belt which crosses the state. The production in 1909 was 1,065,377 bales, being fifth in rank of the cotton-producing states. Other important products are corn, oats, sweet potatoes, sugar cane, peanuts, peaches and melons. In minerals the state is enormously rich. Immense deposits of iron, coal and limestone in close proximity afford conditions for the manufacture of iron products at low cost, and this has led to great development of this and kindred industries within the last twenty years. In quantity of coal mined the state ranks fifth in the United States, and in iron ore mined it ranks third, next after Michigan, and Minnesota. Other minerals include immense beds of cement rock and on phosphates; also soapstone, lithographic stone, emery and corundum, asbestos, graphite, slate, gold, silver, copper, tin and marble of finest grade.

Manufactures. The iron industry is the most important and has marvelous growth. This has facilitated and given impetus to the establishment of other industries, so that the manufactures of the state have doubled in ten years. Manufactures of open-hearth steel and of cotton goods have greatly advanced in recent years.

Transportation. The state is traversed by about 5,225 miles of railway. The rivers of the state furnish 1,500 miles of navigable waters, the main streams, the Alabama and the Tombigbee, connecting with the port of Mobile through the Mobile River.

Education. Alabama maintains separate schools for white and colored children, and applies the public school fund in exact proportion to the two classes of schools. In the state there are now 6,566 public schools, besides 45 high schools, nine normal schools, three of them for colored students, three private normals, nine agricultural schools, nine universities and colleges and nine women’s colleges. Among the more prominent institutions are University of Alabama, at Tuscaloosa; Southern University (M. E.), at Greensboro; St Bernard College (R. C.), at Cullman; at Auburn, the Polytechnic school and the Agricultural and Mechanical College; at Tuskegee, the Tuskegee Normal and Industrial Institute (colored), which has national fame.

There are no works available for the Alabama collection.