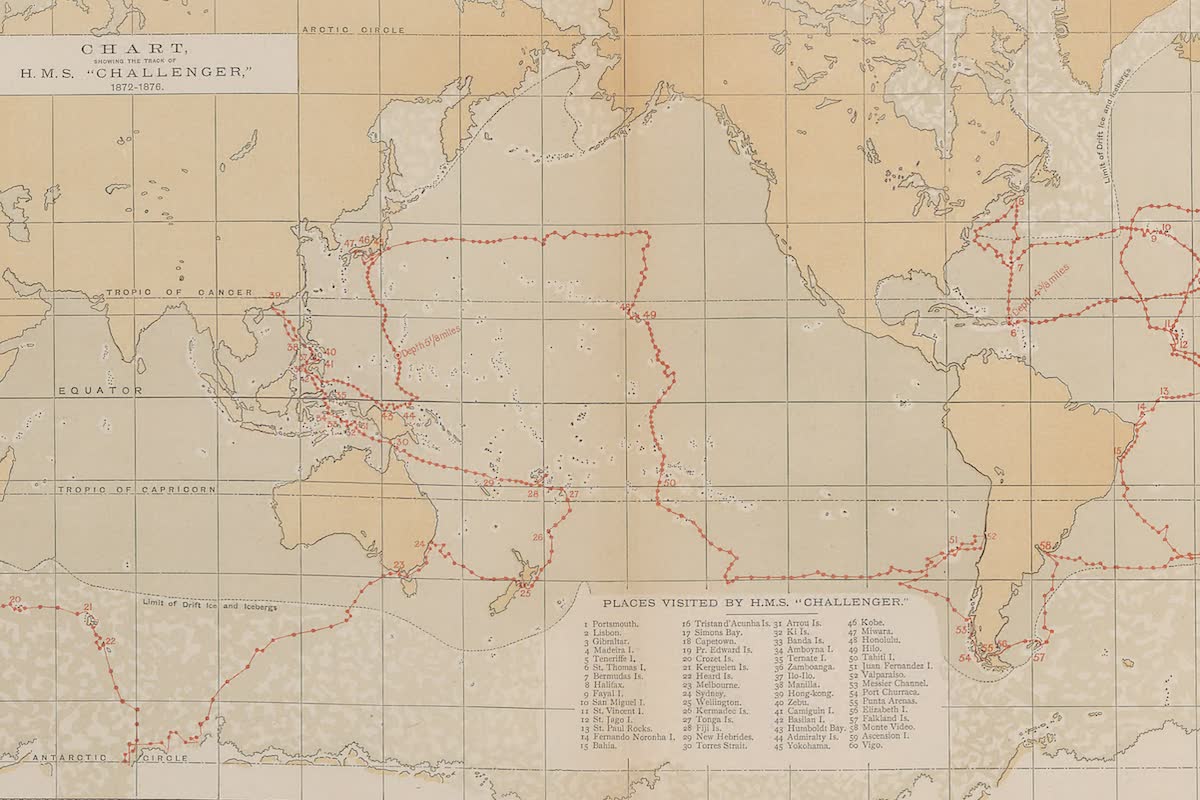 The scientific results of several short expeditions between 1860 and 1870 encouraged the council of the Royal Society to approach the British government, on the suggestion of Sir George Richards, hydrographer to the admiralty, with a view to commissioning a vessel for a prolonged cruise for oceanic exploration.

The government detailed H.M.S. "Challenger," a wooden corvette of 2306 tons, for the purpose. Captain (afterwards Sir) George Nares was placed in command, with a naval crew; and a scientific staff was selected by the society with Professor (afterwards Sir) C. Wyville Thomson as director. The staff included Mr (afterwards Sir) John Murray and Mr H. N. Moseley, biologists; Dr von Willemoes-Suhm, Commander Tizard, and Mr J. Y. Buchanan, chemist and geologist. A complete scheme of instructions was drawn up by the society.

The "Challenger" sailed from Portsmouth in December 1872. For nearly a year the work of the expedition lay in the Atlantic, which was crossed several times. Teneriffe, the Bermudas, the Azores, Madeira, the Cape Verd Islands, Bahia and Tristan da Cunha were successively visited, and in October 1873 the ship reached Cape Town. Steering then south-east and east she visited the various islands between 45° and 50° S., and reached Kerguelen Island in January 1874.

She next proceeded southward about the meridian of 80° E. She was the first steamship to cross the Antarctic circle, but the attainment of a high southerly latitude was not an object of the voyage, and early in March the ship left the south polar regions and made for Melbourne. Extensive researches were now made in the Pacific. The route led by New Zealand, the Fiji Islands, Torres Strait, the Banda Sea, and the China Sea to Hong Kong. The western Pacific was then explored northward to Yokohama, after which the "Challenger" struck across the ocean by Honolulu and Tahiti to Valparaiso.

She then coasted southward, penetrated the Straits of Magellan, touched at Montevideo, recrossed the Atlantic by Ascension and the Azores, and reached Sheerness in May 1876. This voyage is without parallel in the history of scientific research. The "Challenger" Report was issued in fifty volumes (London, 1880-1895), mainly under the direction of Sir John Murray, who succeeded Wyville Thomson in this work in 1882. Specialists in every branch of science assisted in its production. The zoological collections alone formed the basis for the majority of the volumes; the deep-sea soundings and samples of the deposits, the chemical analysis of water samples, the meteorological, water-temperature, magnetic, geological, and botanical observations were fully worked out, and a summary of the scientific results, narrative of the cruise and indices were also provided.